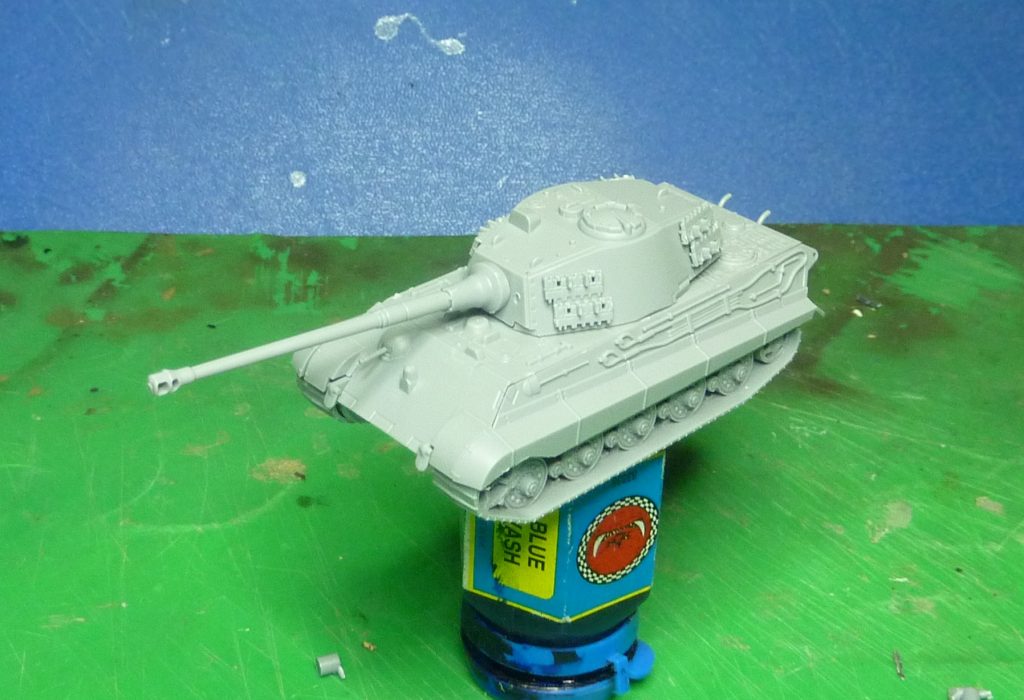 Today, Lee brings us a review of the Zvesda Tiger II (Henschel turret)

Long term opponent Nathan noted that I have a “template” when it comes to Zvesda reviews; note ease of assembly, highlight lack of detail on some surfaces, berate lack of options,  note cheap price, finish by saying “It’s okay, not the best but cheap.”

Now, whilst accurate, the last few Zvesda kits; the Lee, the Ferdinand and the Tiger, have challenged this opinion.  Sure, lack of options is still an issue, but all of a sudden the detail is more evenly distributed and rich and its harder to dismiss Zvezda as just being the cheap option.

So, when the Tiger II appeared, I took notice.  I’ve been meaning to get a Konigstiger for a while but the £13 price for a single tank just kept pushing it back down the priority list, even as books like Remagen made a Konigstiger force appealing.  Being able to get 4 King Tigers for the price of one resin one made it much more appealing.

So, I bought one for review purposes, right? Even as the Tiger I was reaching Leningrad in 1942, its replacement was well underway. Porsche and Henschel competed for the Hull design (Krupp got the turret design for both hulls) and once again Porsche was too complicated for its own good.  Henschel on the other hand offered something akin to a scaled up Panther – combing well sloped armour with a long barrelled ’88 already making its debut on the Ferdinand and Horniesse.  The Tiger II, also known as the Konigstiger (the German name for the Bengal Tiger), and later the “King Tiger” by the western allies, was born and became the heaviest production tank of the war, at 68 tonnes.

The Tiger II made its debut in Normandy.  Panzer Lehr had received an early batch but were unimpressed by its reliability and were in the process of sending them back (history does not note if they had to print off a return label from the e-mail) when the allies hit Normandy.  Additionally, the 503rd Heavy tank Battalion was dispatched to reinforce the area around Caen.    In both cases the allies were faced with a tank that they could not kill from the front but which could pick them off at a great distance.  Excepting near-suicidal flank shots, only the air and artillery superiority of the Western allies presented a reliable solution that could really stop the Tiger II.  Well, that and its unreliability and thirst for fuel.

On the Eastern front, the Soviets fared little better.  The King Tiger could reliably kill even the IS-2 whilst again being invulnerable from the front.

Other than losing its Zimmerit and small detail changes, the only real change on the King Tiger production run was the deletion of the early turret – with its rounded nose and complex turret shape due to the cupola position – in favour of a simpler version that didn’t bounce rounds into the Hull’s top armour!  These turrets are often called the ‘Porsche’ and ‘Henschel’ turrets and explained as the early versions being fitted with surplus turrets from the Porsche loser, but in truth, as noted earlier, Krupp had the contract for the turret design and made both versions.

The 17pdr APDS in theory could penetrate the frontal armour under ideal circumstances and the Russians claimed its 100mm and 122mm penetrated the armour in post war testing – but no credible evidence exists for a frontal kill of a Tiger II in combat.

Ultimately, the greatest enemy of the King Tiger was logistics.  The loss of key oil fields left the King Tiger struggling for its life blood and the declining state of German industry meant a solution for it poor reliability was never achieved.  But the King Tiger went down swinging with both aces and training crews manning both new builds and ex-training “Porsche” turrets in the last days of the Reich. The Tiger II model, like the other two Tigers, is split over two sprues.   We also get an A5 sheet with instructions on.  So far so familiar! Unlike the Tiger I there seems to be no clear divide between an upper hull / lower hull sprue which I though was weird with a JagdTiger kit already announced which would benefit from a common track and lower hull sprue.  I guess it just didn’t work for component count and positioning. Following the instructions, I assembled the sides of the lower hull onto the lower hull main part via an internal structure component.  As with all Zvezda reviews I kept the glue off to see how the fit worked out given its meant to be a glue free assembly. Next I fitted the rear plate and two more structural components.  Now, these look very similar but they are not!  This became quickly apparent and was easy to fix once I got the components back out.  Be careful at this stage!  I also fitted the track tensioner on the rear plate, which for some reason is a separate part.  You could leave it off on the occasional tank and fill the hole for its peg in. Next I put the tracks on.  This once again obscured the fine work the sculptor/designer had done on the torsion bar suspension! The top of the hull now goes on.  In future I plan to glue the join between top plate and engine rear plate and top plate and front of lower plate but the join is pretty good without that. Next, the sides of the hull go on, including the skirts.  Again, a line of poly cement where the sides meet the top and rear plates wouldn’t hurt but the join is pretty good.  I then pop the MG ball mount in to finish off the hull. Now, onto the turret.  The gun elevates!  To do this it needs a somewhat fiddly three part hinge (two fixed points and the barrel mount).  Assembling the three parts together and then slotting onto the turret base plate as an assembly seemed to work best.  I’m not sure if there is a right or wrong way to which way the barrel holder should go on as the barrel itself looks rotationally symmetrical so i don;’t think it makes a difference. Next we add the front and top of the turret.  You’ll note the large slots in the side of the turret – that’s not a previously unknown pistol port but what the track links attach to.  This means if you don’t want the track links you have to fill four bloody big holes!  I’m not sure why Zvezda had such an invasive slot when a small peg and hole would have no doubt worked Then we slot the gun on.  That’s the turret done, save adding the track links The side detail is very good.  We get tow lines, tools and cleaning rods.  Its not often we see these on a Zvezda kit so its really good to see.  I guess having the hull sides as separate parts helps capture the detail.  The track links on the turret are nicely detailed too.  It’s just a shame that you are almost forced to use them!

No issues with detail on this side of the tank either. From the front, there are some shortfalls in detail on the driving light and periscopes.  The loader periscope (the rounded off rectangle on the left top of the turret as we look at it here) is also dramatically oversized compared to the real thing.  You’ll note that the left fender above doesn’t quite meet up.  I later found that I hand’t quite squeezed it in enough.

Without glue, the rear hull joins are a little loose.  Its good to see the tow links and the like detailed.  The only complainant I would add is the ugly infill between the exhaust pipes and the rear plate.  You can see it better below.  I plan to add the curved metal exhaust covers that were usually fitted by the crew to hide a glowing exhaust at night.

From the top, the detail of the engine deck and hatches can be appreciated.  It’s just a  shame you can’t have any of the hatches open – not even the cupola. The finished tank.  All in all, other than a few niggles with detail such as the turret periscope and exhausts, the kit is very well detailed and a definite continuing of an upward trend for Zvezda.

The build was simple but sufficiently interesting to make me smile at the design.  Any tank in 15mm with an elevatable gun is always going to get a thumbs up!

The King Tiger is the zenith of heavy tanks in Flames of War.  The front armour of 15 is almost impenetrable in the game, whilst the side and top armour are both higher than most other tanks at 8 and 2 respectively.   The main gun packs an AT16 FP3 punch out to 40”.

The real issue of the King Tiger is its cost.  Platoons will inevitably be limited to one, maybe two tanks a platoon making them vulnerable to being assaulted by Infantry tank hunters.

Similarly, the King Tiger is vulnerable to artillery and air attack. Top Armour 2 is good but it doesn’t take much to go wrong – especially vs Time on Target 155mm or Mike Target 5.5″ guns.
I’ve seen 25pdr kill King Tiger before with massed repeat fire!

A list I’m planning to use is this, from Bridge at Remagen: Always Defend means the enemy has to come to me.  The Volksturm and Anti-Air don’t count for reserves count so are always on the table – worst case in a half on/off game in which case 2 of the King Tigers start off table leaving *only* four on.

The Volksturm will go on the flanks to stop any 76mm Sherman IV charging my flanks.  They won’t last long but it buys time for the King Tigers to get extra shots in.  The Luftwaffe hopefully keep any AOP or attack aircraft off me, mitigating two of the biggest threats to the army.

In a mobile battle, the King Tigers will have to wade in, the CO and 2iC joining one platoon to give a fairly hard hitting punch.

Its all good in theory!

Well, its good to see Zvezda still haven’t settled on a price for the heavy tanks and this price makes the Konigstiger cheaper than the Tiger I!  I paid £3.49 a tank and thought it was a steal but now its in UK stockists other than e-bay the price seems to have settled at £2.99.

Given the Battlefront Resin and Metal one comes in at £14.50, that’s a hell of a price delta.  Even allowing for the Porsche and Henschal turret options, the open hatches, and commanders, its hard not to take a hard look at the Zvezda price and relatively high quality and start seriously weighing up if a bit of extra work on the command tanks isn’t worth the saving – certainly I did!

All in all, this may be the best Zvezda kit to date, continuing the trend that the M3 Lee started in my Zvezda reviews!  Yes, the lack of an open cupola is an issue and there are a few detail screw-ups (the turret periscope is almost comedicly oversized) but you get so much kit for the money its hard not to overlook the relatively minor issues presented.  In lieu of a Plastic Soldier or Battlefront plastic kit (and even then the price would not be beat) its hard not to recommend this kit.