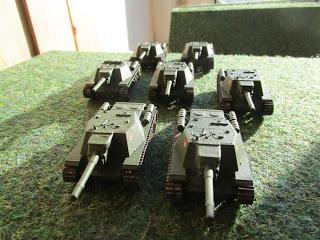 A review from Rich Hardy

The Zvezda SU152 is one of two new Soviet assault gun kits to be released recently, the other being the SU100. Originally entering service in 1943 the SU152 arrived at the front just in time to see action at Kursk, where their ability to destroy Panthers and tigers by literally blowing off the turrets led them to be nicknamed Zveroboy Beast Slayer). Based on the KV tank chassis the SU152 was the last vehicle of the KV series to remain in production, and production continued until December 1943. After service with every Soviet front the SU152
remained on the strength of the Red Army until 1954. The SU152 kit is a 13 piece kit and comes on two sprues in green plastic The detailing is very good in places, and disappointing in others, Zvezda are really trying to improve the detailing on their kits, I have a couple of their T35s and the flat slab sides are a major let down on that kit. The detailing on the roof and engine top of the chassis on the SU152 is actually very good, but again the fighting compartment sides are very flat and undetailed – this can be remedied by attaching spare track lengths or stowage of course.

The assembly instructions are printed on the rear of the box, there is no separate instruction booklet. However the build is fairly intuitive and not difficult. The steps I took are illustrated in the attached photographs. There are no “with care” issues in relation to removing the pieces from the sprue (unlike on the SU100 model). The kit snaps together very well, and doesn’t need glue. The gun is attached through the front of the glacis and has an oddly angled fitting, so do try a “dry fit” if you are planning to use glue on your model. Unlike the SU100 kit where the external fuel tanks need gluing the external tanks on this kit fit snugly on without glue. To give the model a bit of additional weight I glued a couple of small, low value foreign coins onto the inside of the underbelly casting and the inside of the upper hull casting and that works quite well in giving a nice “feel” to the kit As you can see the kit is very nicely sized when compared with the Battlefront metal and resin SU152, it is slightly smaller in both length and height but not so much as to be noticeable on the tabletop. There are slight modelling differences to the hatches. In terms of ease of assembly it’s easier than the Su100, but unlike the SU100 there is a slight (and I do mean slight) size difference when compared to the Battlefront comparitor. in respect of detail, the Zvezda model actually has more detail on than the Battlefront one. The fighting compartment roof is riveted and the front two hatches have slightly more detail. On the roof of the engine compartment the rear two engine access hatches are more raised than on the Battlefront model. Battlefront on the bottom for comparison Battlefront on the left slab sides, but these can be covered up doesn’t look out of place

Personally I found this a really really nice kit, it doesn’t look out of place next to my two existing Battlefront SU152s, it goes together really nicely and the detailing is excellent, so I’ve added 7 of the Zvezda kits to my existing Battlefront 2 for use in an SU152 based Heavy Self Propelled Artillery Regiment, giving me 9 hulls rather than the 6 that I tend to end up with in the ISU based Regiment.