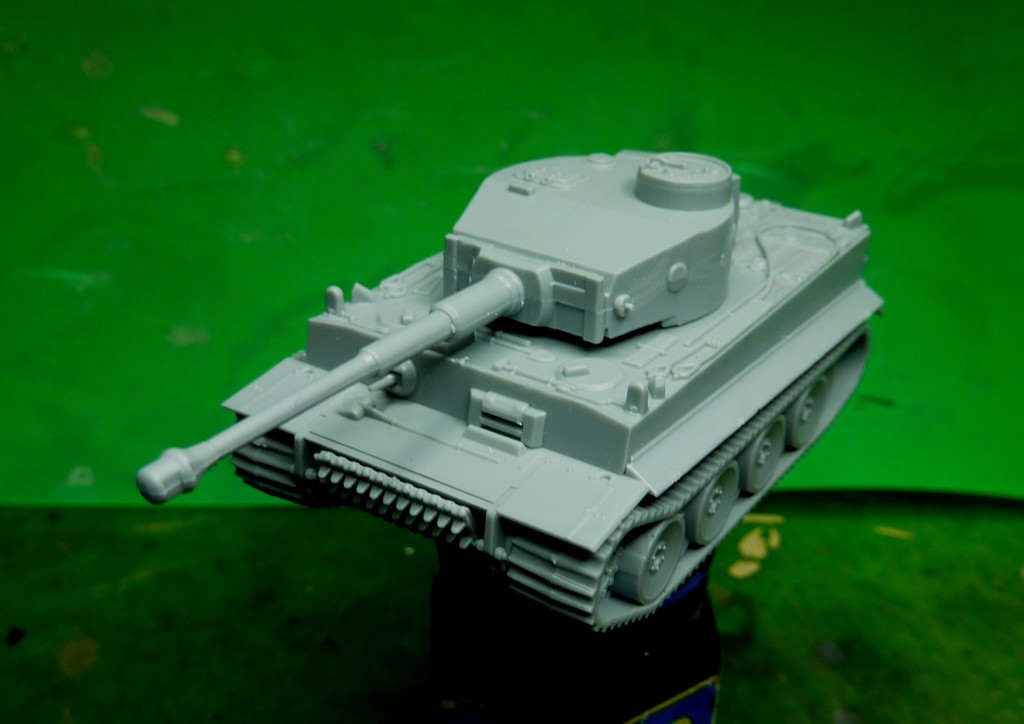 In today’s article, Lee looks at the Tiger 1 model released by Zvesda. It seems every range has its take on the infamous big cat – where does Zvesda’s take sit?

Ah the Tiger!  Almost mythical in its reputation; no other tank serves quite as well as a benchmark of a miniature company’s craft as it is inevitably the tank lavished with the most attention by manufacturer and customer alike.

Zvezda have been working their way through WWII and seem, with the excellent Ferdinand, the Panther d (to be reviewed at a future point) and this kit, to have reached Kursk; their combat debut (kinda – the Tiger had already been used around Leningrad).  As such, we finally have our benchmark.  How does this cat compare to the rest of the litter? [At this point, an author has to wonder if a background section is even worthwhile. Surely everyone knows what the Tiger is?  Still, it seems rude to deviate too much from my template…]

The Tiger may have not been the best tank of WWII (that was clearly the Tetrarch), but it is almost certainly the most iconic; for the axis side as the very least.  It’s wide tracks, boxy hull and horse-shoe shaped turret are distinctive and a regular feature of WWII movies (albeit often built on top of a second hand T-55 chassis) and almost every history book will spend at least some time focusing on “Tiger Terror” – where every axis tank got labelled as the beast; such was the fear it inspired.

The Germans had had a few stabs at making a heavy tank, but the efforts had fallen by the wayside.  However, after being confronted by the Matilda II and Char B in the battle for France, efforts began to crystallise and plans were drawn.  Henschel and Porsche both submitted designs but were force back the drawing board as Barbarossa revealed the T-34 and KV-1 to the Germans.  The gun and armour were both upped significantly.  The Germans were, it is fair to say, somewhat fed up being second best.

Porsche, as previously covered, submitted a science project whilst Henschel produced a more conventional effort (Krupp produced the turret for both – I guess that was their thing) and got the contract.

The Tiger combined an 88mm main gun (not based on the FlaK gun, but more a parallel development) with a well armoured form and, whilst not the fastest tank in the world, did at least have a decent ground pressure and weight distribution to give excellent mobility for its size. When it first appeared on the Leningrad Front, it quickly proved itself nigh on invulnerable to anti-tank guns and able to kill all it confronted, even the KV-1 tank that had previously bested all the Germans could throw at it.  However its prototype nature did manifest itself in engine issues and the cupola was redesigned to be a lower profile. The Tiger 1E made up the bulk of the production run, with some minor simplifications creeping in during the run such as deleting the air filter system that sat on the engine deck.

The Tiger 1E appeared in all the major battles that occurred after its introduction.  The western allies first encountered it in Tunisia and found that its tank guns were no better at penetrating it than the Russian ones were (although a lucky 6pdr hit did bag the first “live capture” of a Tiger). Tiger on its holidays

The Tiger’s reputation was ultimately its undoing as all the allied powers worked to beat it.  The British had a solution already in hand and rushed a batch of 17pdr, mated to a 25pdr chassis, to the front before setting to work to produce a 17pdr armed cruiser tank 9then giving up and making the Comet with a more practical “de-tuned 17pdr” 77mm gun).  The US found that the M10’s 3” gun could just about do the job and decided to leave it to the Tank Destroyers to handle.  They then, belatedly, realised that was stupid and made the 76mm armed Sherman.  The Russians up-armed the KV and T-34 whilst making the excellent 100mm AT-gun and its SP equivalent.

Combined with the loss of air-superiority, the Tiger began to feel the pressure.  The arrival of the King Tiger largely marked the end for its production but the tank soldiered on, both in elite Tiger equipped units and, in the last months in ad-hoc kampfgrupp formed from heavy armour training units.

Often attributed as the “last Tiger” – knocked out in central Berlin

Okay, so in my excitement, I built the Tiger without taking pictures of it on the sprue.  All the bits come on two sprues, much like the Ferdinand and the kit is sufficiently complex (by Zvezda standards) that a double sided A5 sheet is included with the instructions, much like the M3 Lee (although the instructions are only one one side, technically).

The lower hull is six piece construction with two “structural” components fitted into the base that allow the side and rear walls to be pushed in.  The side walls have detail of the suspension and the like but this all gets hidden when the tracks are fitted!  Must have been a slow day in the designer’s office.
A last part is the spare track which is a welcome bit of detail for a Zvezda kit.  If not fitted, it leaves two small holes in the front plate.  These would probably be easy to fill. The fit is okay, certainly living up to the ‘glue free’ ideal of the Zvezda kits.  I did notice that the tracks seemed to sag down slightly.  It can be seen in the photo above and is very slight but present.

As is often the case with the Zvezda kits, the upper hull is straightforward compared to the engineering below it, being just two pieces – a major upper hull piece and the hull front plate.  The air filtration kit is included and, much like the spare track, leaves two small holes if not fitted. The turret is a single piece construction and just slots into its pivot on the upper hull, completing assembly.  Certainly faster than the Plastic Soldier Company kit and not much slower than the resin Battlefront kit. Talking of the competition, how does it compare?  Thankfully I had previously bought a box of Plastic Soldier Company Tigers so we can have some nice side by side shots!
(Worth noting that Battlefront *still* haven’t released a Tiger in plastic – get on it BF chaps!)

Note: the bare plastic of the Zvezda kit was causing some glare so the photos have been darkened to try and eliminate it. The hull compares well dimensionally from the front but the turret seems narrower on the Zvezda kit.  The Zvezda kit lacks driving lights but this is not necessarily incorrect as the photos in the history section shows.  The turret sights and co-ax apertures are missing on the Zvezda kit.  The cupola on the Zvezda kit is taller, making it indicative of an early production run Tiger, maybe even the ‘h’ prototype run.  I’m not quite sure on when the change occurs.
Also, neither kit has Zimmerit present.  Certainly something to consider. I seem to recall that the PSC kit allowed for a late pattern exhaust so the differences are slight exaggerated here.  But none the less, the Zvezda exhausts are somewhat ugly with a large infil as they are one piece with the rear hull.  Most the major features are present on both kits, but the Zvezda turret stowage box and pistol ports lack detail.

Road-wheels compare well, but the track of the Zvezda kit has an unnatural feel about its return track sag.  The Turret has its major features present on both but the Zvezda kit lacks any detail to them, as noted above.  The turret side is featureless but, again looking at the Leningrad Tiger, this is not necessarily incorrect.  The track guards on the Zvezda kit are not segmented though, which appears a limitation of the kit.

Top deck detail is good on both kits, the PSC kit having slightly more depth to its detail.  Some detail on the turret top is absent from the Zvezda kit.  The PSC kit has a big advantage, to me at least, in that both its turret hatches can be assembled open

All in all, the Zvezda kit is very good.  The PSC kit is better, especially in turret detail, but not by as much as one might think.

With detail being similar, the big differential is going to be price.  Looking as the Ferdinand kit, Zvezda has this one in the bag, right?

So the PSC kit comes in at a cheaper price for a, frankly, better kit.  It really shoots the main charm of Zvezda down.  If you need only one Tiger *then* the case for Zvezda improves – especially with some hunting around, but you can still get a single sprue from PSC for £5.50, cheap enough to make the quality differential show.

The Tiger 1 kit from Zvezda is a very good kit, continuing the positive upwards trend of their 1:100 offerings.  It suffers from the normal Zvezda issues of a lack of options and a slight lack of detail (but better than earlier Zvezda kits) but its biggest issue is that the competition, for once, offers a better AND cheaper option.

As always, that assessment assumes a full rrp and at UK prices.  Its not impossible that it may be the cheaper kit elsewhere and then it will come down to the normal trade of options versus cost.

Still, the kit leaves me expecting good things of the announced King Tiger kit.  Expect a review as soon as I can get my mits on one (or six…)