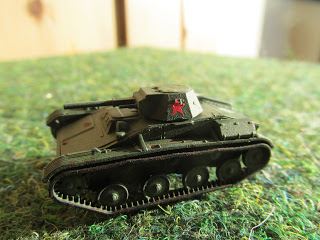 Along with the late war SU100 and ISU152 kits which I previewed earlier, Zvezda have also recently brought out a plastic T-60 light tank kit.

The T60 was designed as a replacement for the earlier T-38 reconnaissance tanks and it entered service in July 1941.  6292 were built.

Although a substantial improvement over the previous, machine gun only, armed T38; the 20mm cannon, derived from an aeroplane mounted gun, was already looking obsolete by the time the T60 came into service.  Although useful against early panzers and armoured cars, it was easily outmatched by developments in the Panzer III and IV series vehicles.   Amazingly, despite this poor combat record, production continued into 1943, though in decreasing numbers.

It’s fair to say that the T60 wasn’t popular with crews, and it was later relegated to escort and training duties.

For those of you unwilling to fork out for a more expensive “grave for two comrades” then Zvezdas release provides a fairly cheap way to provide bulk to your Soviets.

The Zvezda model is an 11 piece kit (if you discount the flag attachment which is used in Zvezda’s Art of tactic game).

Like the other Zvezda tank kits (well the T26, BT5, KV etc) the kit is basically tracks, which attach to the hull and side parts, with the Turret sitting on top.

The hull goes together nicely and there are no real issues to watch out for, unlike on the SU100 where you can cut off the track attachment pins if you aren’t careful. Of the three Zvezda offerings I’ve made up recently for the blog this was the nicest in terms of ease of construction and finished product. The detailing is adequate and the tendency of Zvezda models to have un-detailed slab sides has been overcome. Sadly it’s also probably the one I’ll use the least, as I already have 10 Skytrex T-60s which I acquired some years ago on ebay.

However, if you’re thinking of bulking out your Tankovy with T60s, then this kit is both highly affordable, easy to make and of a higher quality than the price suggests.