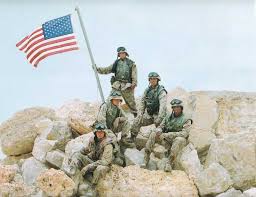 Yankee Doodle: How To Bring Your US Force to 21st Century Standard

Let’s face it, we as hobbyists are always looking to make our armies stand out on the tabletop. Some look for key details, some kitbash unique pieces, others paint a certain way.
Me, I like to pattern my forces on units I served in, or conflicts I have either fought in, or read about. I was just a small lad in the 80s, and only just aware of the significance of Operation Desert Storm in 1991. However, after 2001, I got a thorough education in the Army while serving in places like Washington, Germany, and Texas. With that said, consider this a template to change your 1980s Americans to 2000+ Americans and have them looking good on the tabletop.

Ok, so lets get the obvious out of the way.  If you want to go for 21st century kit, you have to start with ACTUAL 21st century kit (Put that RDF/LT Down!).
While yes, it does limit your choices somewhat, this will be keeping with the look as well as “feel” of a force from the 2000s. So, while M113s and M60s are cheap, you should be looking at Bradleys and IPM1 Abrams (at a minimum as A1s are ungodly expensive in points).

But fear not! The M113 Mortars are still around, and you can still use the M113 FIST (Though I strongly advise using the M901 model for accuracy if you so choose).

The Bradleys should be M2A2 standard across the board, as they are the baseline type now. Overall, you want to go for accurate kit (but, hey, its your Army!). Oh yeah, one last thing. In the early 2000s vehicles went from being green or NATO camo to tan. So if you’re looking for 21st century, go tan paint.

So, one thing to do to switch your force from the 80s/90s to the 2000s is to change your camo patterns on your infantry.
Now, EARLY 2000s (2000-2006) BDUs are perfectly usable as we were still wearing them. However, in 2006 the Army went from BDUs to the controversial UCP (Universal Camouflage Pattern) which we in the army tended to refer to as ACU (Army Combat Uniform).
This was a  bluish-green pixelated camouflage that, frankly, sucked.

However, it was the uniform from 2006-2014 roughly. Now, you’re probably wondering how to paint such a tiny pattern on a 15mm mini. The answer is simple: you don’t. I achieved ACU by painting my minis in Vallejo Camo Beige or Deck Tan, then carefully drybrushed layers of Light Green Blue and  German Camo Extra Dark Green. The trick is to allow the previous layers to show through. You can do USMC MARPAT this way too.

In the mid 2010s, the Army started to transition to the far superior OCP (Objective Camouflage Pattern, commonly known as MultiCam). This pattern is a little more complex to paint, requiring 5 colors and a bit of patience. To achieve multicam, start with a base of German Camo Beige. Paint irregular splotches of Green Grey and Medium Olive, covering about 2/3rds of the miniature. Then, paint small dots of  Chocolotae brown and Stone Grey in random places on the mini (about 1/3 total coverage). This gives a very good “multicam” look.

One final note on infantry platoons. While they will simply be another team, I strongly suggest modeling a MG team in each platoon. We always had at least one M240 machine gun on mission, and this will help with visual aesthetics. Also, if you so wish, trade out the Dragon minis for ones carrying Javelins. You can find them from various producers such as Khurasan. Again, will be a “counts as” Dragon, but the visual appeal will look great.

Contrary to popular belief, the A10 is not the only aircraft flying CAS for the ground troops. While perfectly acceptable to use (and bad@$$ to boot), air support in the 2000s gives you a lot of flexibility. I’ve seen and heard of airstrikes from a variety of aircraft from F-16s, Tornados, Eurofighter Typhoons to B-1B Lancers. CAS minis can be a very flexible when it comes to options for a 21st Century force, and is wholly dependant on your personal taste.

As for helicopters, I would recommend Apaches for the Army while running Cobras for the Marines. However, in my time in Iraq, OH-58D Kiowa Warriors flew CAS for us a lot so that is also a unique option for your 21st century troops.

Here is a list I put together putting my theories into practice:

So, for those of you wishing to upgrade your army to represent an ultra-modern force on the tabletop, I hope this quick guide was a help. I look forward to seeing what other hobbyists come up with.

Until then, happy gaming and may your dice be hot!