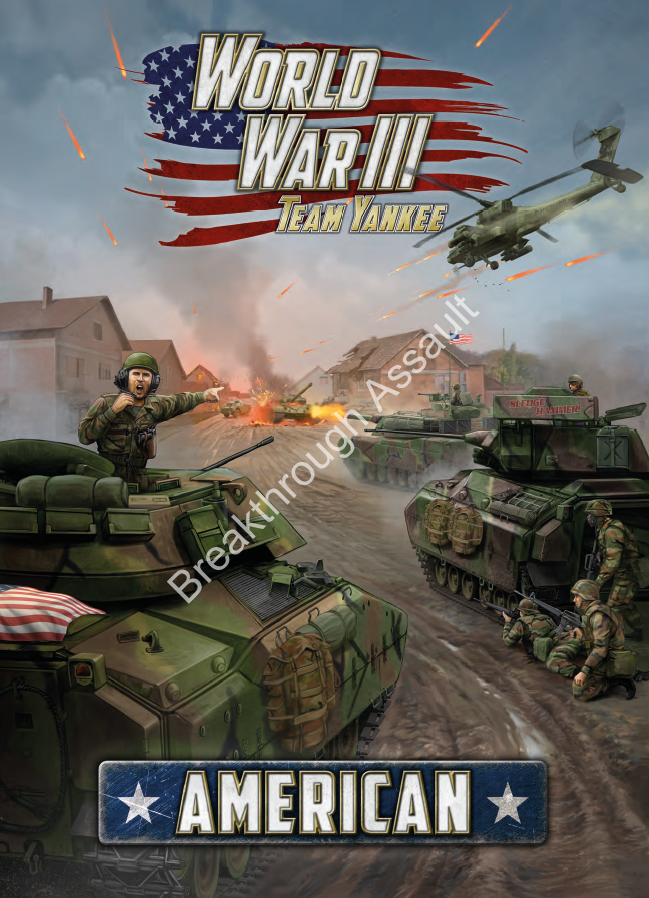 Thanks to my FLGS (Hoist the Colours Models and Games), I managed to get hold of an early copy of the new “WWIII: TY American” book.
Flicking through the pages, I came across the new Light Attack Company and, as I already have 23 Hummers, I knew this was the formation for me. My current army lists are usually a Marine M60 company and an HMMWV Cavalry Troop, but how does the Light Attack Company compare?

Now I will say upfront that I am not a competitive gamer, and I don’t play in tournaments. I’m more beer and pretzels (or Tea and Biscuits as it is up here in Yorkshire). So please bear in mind that I may not always take the most effective force.

For those not familiar with the cavalry troop introduced in Stripes, you can take an HQ of two Hummers with .50cals and between 3 and 6 scout sections. Each section has a .50cal, an MK19 grenade launcher and 1 or 2 TOW launchers (or TOW 2 with the upgrade). Each section also the Scout and Spearhead special rules.

Here is an example one of my 100pt armies

The list had ten TOW missile launchers (plus a bucket of 0.50 rounds going down range), twelve tanks, a large infantry platoon to hold objectives (or clear enemy infantry out of buildings), dedicated recce, strong anti-air options and artillery support.

Great, but can we improve on that with the new book?

The new formation is still a lot of heavily armed (and barely armoured) hummers, but there are some significant differences.

The HQ is the same with a pair of Hummers with .50cals but then things get more interesting.

A light attack platoon is a pair of .50cal armed Hummers, one Minigun Hummer (though one of the .50 can be swapped out for an additional minigun Hummer) and one Mk19 Grenade launcher Hummer. Miniguns are like the Mk19 Grenade Launcher cranked up to 11; a ROF of 7/4, but only AT2 and Firepower 6.

The Fire support Platoon is made up of two to four TOW or TOW2 armed Hummers.  You can also add in an RDF/LT assault gun platoon, a Light Motor Infantry platoon and a 9th Motor HMMWV Scout Troop.

Stats wise, their morale is slightly worse at 4+, but their skill is slightly better at 3+. Also, whilst their core units still have Scout, they do not have Spearhead.

So, what are the advantages and disadvantages of each, I hear you ask?

Well first up, the Cavalry troop does have the advantage of every unit in the formation having Spearhead, so you can do some deployment shenanigans, also the Morale of 3+ means the units are more likely to stick around when they start taking losses.

Having TOW launchers mixed in with the Mk19 grenade launcher and the .50 Cal can be a pro or a con depending on the circumstances. Whilst you can spread out your TOW launchers and give them ablative armour in the form for two non-TOW Hummers, it does mean that they are harder to concentrate against one target and that your anti-infantry firepower is watered down. You also have to choose between standing still to fire the TOW or moving to use the .50cal and Mk19.

With the Light attack company, your TOW launchers are grouped together in dedicated Fire Support units, leaving your Light Attack groups free for dedicated anti-infantry duty, and if you max out on the miniguns you get A LOT of anti-infantry firepower, a total ROF 14 (halted)/8 (moving) per platoon, but with rubbish AT and Firepower.  Catch some infantry out in the open and they won’t stand a chance! But, if they come across anything with even a token amount of AT, they won’t survive very long; even BTR-60 and BRDM can give them a bad day.

The light attack company does have one major advantage over the Cavalry troop: they can have in-formation infantry and “tanks”, although personally I’m not sure how much value these units will add. The RDF/LT assault gun platoon has the armour of an APC but does bring a ROF 2/1, AT 19, laser range finder equipped main gun and, interestingly, Hammerhead. If it comes up against any of the newer MBTs it won’t do very well, but it’s cheap and will make a mess of older tanks like T-55s or Leopard 1s.

The Light Motor infantry platoon can be summed up as lots of infantry being carried around in Hummers. At maximum size, it’s ten infantry stands (six SAW/LAW, three Dragon and an M60 LMG) and ten Hummers, as the Hummer transport only has a passenger rating of 1. The transport Hummer is only armed with a 7.62mm mg, and being armour 0 all the way around, it’s probably the objectively “worst” transport in the game to date. A minimum size unit is 8 stands with 8 Hummers, so personally I think I’ll stick with my Marine infantry.

What does this all mean for my army? I want to keep the Marine M60 tank company and I think I will switch out my HMMWV cavalry troop for a light attack company.  I like the idea of grouping my TOW launchers together and having dedicated Anti infantry units.

A total of 22 Hummers

That comes out at two points more than my Cavalry Troop so, if I drop the TOW Anti-tank squad from the Marine M60 company, I’m still getting the same number of TOWs and the points will match. I would like to add in an RDF/LT unit, but that would require some more messing about, as a unit of four is nearly the same cost as two M60 Patton tanks. Also, this is all with regular TOW missiles, if I want TOW2 I’ll need to find shave off a couple more points elsewhere!

It’s worth noting that if you want to use TOW2 missile then all your TOW need to be TOW2- you cannot mix and match TOW and TOW2 in your army. Whether it’s worth the upgrade or not I think depends on if you know who you’ll be fighting. If you’ll be facing non-T-80U WARPAC forces, just take normal TOW as you don’t really need the AT bump. If you’ll be fighting against some top-end NATO tanks or you don’t know who will be facing, you’re best bringing the TOW2 just to be on the safe side.

So, there we have it., I personally think the Light Attack Company brings a new twist to the Hummer horde, and I look forward to watching it charge across the table to get shot to pieces by my opponents BMPs.

Now it’s time to build some Hummers with miniguns…