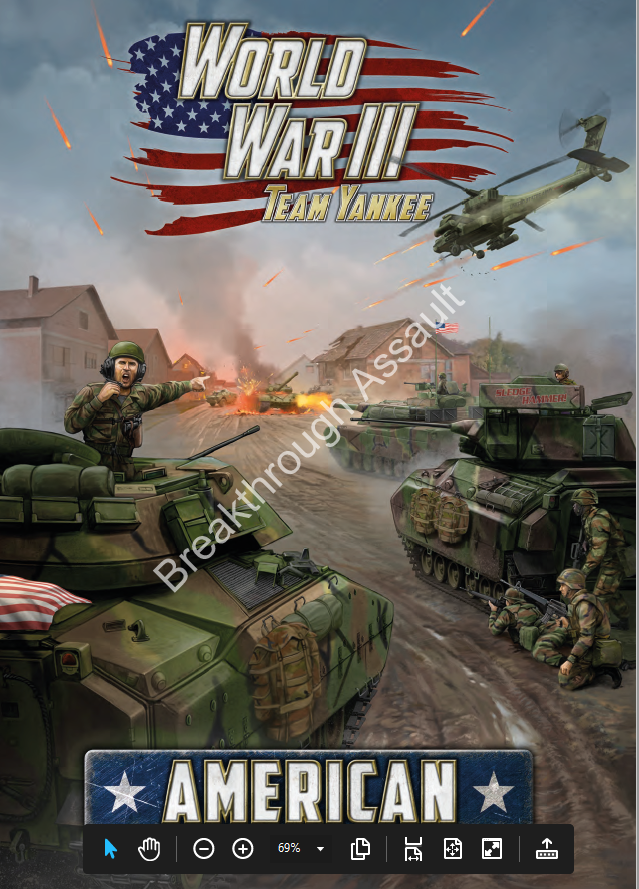 The M1 was the first NATO tank in Team Yankee, obvious when you consider it was the star of the book of the same name!  But BF were forward thinking in the kit design and included all the parts to make the IPM1 and the 120mm barrel of the M1A1.  The IPM1 made its debut in “Stripes” but now, with “WWIII:TY – Americans”, we finally get the M1A1 and M1A1(HC) models of the M1 too.

But which of these bad boys is the one to take?  Read on.

Tank’s are often compared by using the (somewhat flawed) “iron triangle”, or more recently, the “spiderweb”.  Whilst the latter is a much better way of comparing real world factors, the former will suffice for our limited wargaming analysis.

The M1 family all share the same stats for movement and cross checks, even the M1A1(HA)!  They also all share the same advanced stabilisers giving them the fearsome RoF2 and 14” tactical move that makes the M1 one of the most mobile tanks in the game.  It’s a dead heat for all four contenders

All four tanks sport Cobham armour so have the same SA16 protection vs HEAT weapons, largely allowing them to plow into Warsaw Pact and most NATO infantry with abandon, but requiring a wary eye at exposing the flanks to ATGW.

The armour protection vs solid rounds is where the tanks vary.  To consider it, I considered two scenarios:

To mathematically compare, the score required on a D6 to survive (bail counts as survived) was tabulated with a “no change to kill” counted as 0 and a “no chance to save” scoring 7.  For example, the M1 with its FA18 requires a 4 to be bailed by the 125mm at optimum range; anything less an its almost certainly toast.  The total of the scores was then subtracted from a maximum of 20pts on offer for each scenario.

The M1 family splits into two at this point, the M1 and IPM1 packing the 105mm cannon and the M1A1 and M1A1(HC) both sporting the 120mm.  Both guns have similar range, firepower and special rules, differing only in the AT.  This means we can ignore performance versus infantry teams and concentrate solely on the performance vs other steel buckets.

Here our target set is a mix of low end (Iraqi T-55) and high end (Soviet T-80U) threats, plus allied heavy weights in the form of Leopard 2 and Challenger ROMOR.  As with the protection stats, we are looking at the minimum roll of a D6 to survive a hit, with a bail counting as a survival and again we treat auto-penetrations as 7 and automatic “pings!” as 0.  We then total that up and get as high a score as possible.

Finally, we sum up the results of the three tests to give us a final score.

It’s all very well being a death dealing jet-powered machine of doom, but “bang for buck” is a consideration so I also divided the scores by the points per tank to see who sat in the sweet spot of performance versus cost.

Unsurprisingly, the M1A1(HC) dominated the field in terms of raw score, with its combination of firepower and protection superiority ensuring the highest score on the board.  However, its high cost means the IPM1 actually comes out top when considered on a cost per tank basis.  Now, this doesn’t surprise me terribly as I thought that it would be in the sweet spot.  It has the second best armour and the gun still beats out most threats.  Being a whole 5pts cheaper than the M1A1 (and half the cost of the “heavy armour”) means it can squeeze in ten tanks into a 100pt army (so long as you aren’t fussy about supporting them), putting out twenty shots.  Sure, the 105mm struggles vs the high end peers, but that’s where we put mobility to good use and go for the flanks, something that is easier when the enemy has to worry about M1 going up both flanks!

The local meta is going to drive a lot of the decision process here.  If you know you will be playing massed Iraqi armour then even the stock M1 is probably overkill.  If you have to contend with a local gaming scene that plays a lot of blue on blue (without Iraqis) then the raw performance of the M1A1 is going to make a strong case for spending the points.

Getting the punch in early.

When I mentioned I was writing this, guest writer Andy had stated that he wanted to do a counterpoint in favour of the M60.  Running the Patton tank through the same scoring scenario, the excel sheet spat out the following:

Despite actually scoring negative points on the frontal protection scenario, the low cost of the Patton, combined with sporting the same 105mm as the M1, means it comes out on top of cost/tank analysis.

To be fair, I feel this is true if you are facing off against massed crap tanks and can get an alpha strike in that wipes out a battalion (you can field 25 tanks in 100pts, so an alpha strike of 50 shots will really light things up).  I’d worry that it will quickly wilt when facing higher end threats where the frontal protection makes a kill unlikely.  We know that the T-80 is twice the cost of a Patton but it can kill the M60 at any range and is invulnerable from the front.  On the other hand the Patton can bring friends that can kill the T-80 whilst absorbing the attention.

Needless to say, I look forward to the reply article with interest!