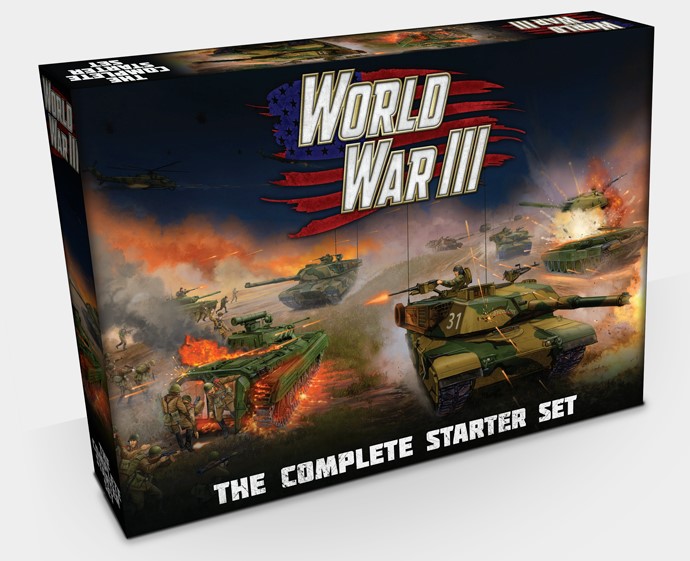 This got my brain thinking. I wanted a new project and my old blog buddy Adam had just painted up a TY French army. So, to end this story and if you hadn’t worked out by this point, I said “yes” to the review.

Now I was going to do a video review but I had technical issues and by now you have probably seen a few unboxings, or have bought your own. So I will keep the unboxing/review of the box quick and, instead, focus more on what to do with the box as a beginner/new player. I’m doing this as, really, when it comes to Team Yankee I am a beginner. I never really played it when it was a released and with more tanks, more nations and a new rule book, I’m as clueless as any other rookie.

So whats in the box?

For the Soviets; four new sexy T-80, three of the reliable T-64 and two of the new BMP-3 Infantry Fighting Vehicle. For the US; three M1 Abrams, two M60 Pattons and two M3 Bradleys. While this isn’t really enough for a “proper” army, it’s still 50pts-ish a side and a good launching pad to expand on. Now, I’m mostly going to focus on the soviet bits for reasons that will become clear.

The T-80 and BMP-3 were really nice to put together.  The BMP-3 in particular was a joy to build, hitting that sweat spot of being quick to build whilst still making a lovely looking model. One thing to note is I had issues with my 5mm magnets struggling to fit the turret mounts. I have ordered some 4mm magnets. This is just a little warning as I know I wasn’t the only one to find this issue. But the tabs work fine so this is just something for people like me who are magnet crazy. Also the lack of decals was a little surprising but again not a big issue with the crazy value this box is.

So overall this box is great and, for the price, what have you got you lose picking up the box and giving the game a go for £35? I have wasted more money on a takeaway!

From Box to Tabletop

So you got the box, what next?

Personally I would get a second box, or find a friend to split a box with (if you just want to do Soviets). That’s what I’m doing.  Well I have three Soviet halves, though to be fair this might be too many T-80’s at 8pts each but I got a good deal on the third box and my OCD really wanted a 9th T-80 so I could have platoons of four and a HQ tank. This gives me around 150pts of Soviets for less than £95 which is pretty amazing value!

After that I got a box of T-64’s to get them up to a good number for running them as a Battalion. This to me is a simple choice for a first buy, one five-tank box and you now have 14 T-64’s so you can now run a T-64 formation and T-80 formation which will both have different play style. You will also have 11-14 of them, depending on if you got two or three starter sets.

Next up to expand the options it’s probably going to be the classic combination of an artillery battery, AA platoon and a Storm AT platoon, but this is probably not something that you need to rush out and buy (unless like me you are a little crazy and want all the options ASAP). Two starter sets is probably enough for a great starting point giving you 100pts. Lee’s goint to take more of a look at this tomorrow.

Keep an eye out on Breakthrough Assault on social media and on here for my adventures with the Soviets. Hopefully myself and Adam will get some games in for AARs too. Until then it’s time to tap into my inner Zhukov and paint up some Soviet tanks.

Adam is going to paint up the US but he’s doing something interesting.
He’s struggling to make the most out of the Pattons in his test lists, as they don’t fit into his plans for the US. But, what they could be use for Iran*.

Yes, that’s right, Adam is planning on using the US part for two different armies. Just showing another way to get more value out of the set with models you might not 100% want. But he’s on holiday so I will try and get a few words from him when he’s back, though he was saying something about Cavalry force, HMMVW or something, using the really expensive M1A1 Abrams but still having an army around it. Again I would think the six M1’s he has and the Bradley’s would be the core of the first force and then this would be the stretch goal army.

I’m hoping to post regular updates on the soviet and Adam’s US so you can see where we go from the starter set. Thanks for reading, and until next time

[*alternatively, six Pattons would make an 82pt Magach 6 force for Fate of a Nation! – Lee]