Alex Hamilton (Warden of the North)

The Warden of the North who resides in Castle Black keeping the wildlings/people from north of the Watford Gap out of the lands of men. This means he is very busy so only contributes occasionally during lulls in the slaughter.

Favourite army – soviet late late war motorstrelk: whatever the question, 22 stands of Russian infantry with panzerfausts is the answer.

Marc likes nothing more than coming up with whacky fun armies for the table. So far he’s gone all in with Early War Polish Cavalry with the train and a Vichy French Foreign Legion with camels and a Desert Fort.

Favourite Army:- Panzer Lehr from Panzers to the Meuse.  Spearheading Panzer IVs assaulting you on the first turn, what’s not to like?!
Best Wargaming Moment:- Getting Most Sporting Player two tournaments in a row.  Being recognised by your peers as the “good guy” to play against in a competitive setting is really humbling. And no, I didn’t come last either!
Worst Wargaming Blunder:- Forgetting I had a platoon of 8 rads hiding behind a building which could have swooped on my opponents unguarded objective at any time. The game timed out an hour later and we both got a draw and I only realised my mistake on the way home. Doh!! Mark first got hooked on FOW after attending Corrivarly in 2014.  Since then he has risen to the dizzy heights of ETC Team Wales and has taken on running Breakthrough Assault.  Living in the wilds of the NE he doesn’t get to play that regularly but makes up for it with the conveyor belt like mentality to army production especially with his new found passion for Team Yankee.
Favourite Army:-  Whatever I happen to be playing that day.
Best Wargaming Moment:- My first ETC in Serbia.
Worst Wargaming mistake-: Playing against Soviets for the 1st time and not knowing about infiltrate! Lee switched from Warhammer 40,000 to Flames of War when “Desert Rats” came out for Version 1 Flames of War and hasn’t looked back since.  Whilst more focused on the painting and building aspects of the wargaming hobby, Lee does find time to run the occasional tournament for the Brighton community based at the Brighton Warlords and Dice Saloon.  Lee has put WWII down for the moment to concentrate on Team Yankee, drawn by childhood memories of growing up around Chieftains at Paderborn.
Favourite Army:- Light and Heavy Armoured Squadrons – using the burning wreckage of your own tanks is a totally legit strategy!Best Wargaming Moment:- Winning “Best allied” at a local “Market Garden” tournament with an Airlanding Company that *didn’t* have a bagpiper.Worse Wargaming Moment:- Executing a flank switch double move with my British Desert Armoured Regiment, only to lose half the army to “unreliable”

Ben founded Breakthrough Assault back in January 2012 and after a break in mid 2016 is back! Ben started the site mainly as a way to keep himself focused on painting after the birth of his daughter Jessica. Since then Ben has embraced the blogging lifestyle and can normally be found posting a challenge to get an army painted for his next tournament. Ben mostly plays Soviets armies in Late War but and Japanese in Early War. For Ben’s comeback, he’s currently painting up a Desert British Army with plans for an EW/MW Italian army.

Best Wargaming Moment:- Winning my own tournament, it wasn’t rigged I promise!

Worst Wargaming Blunder:- Last game of Colours 2013 against KP, moving off an objective I was defending to keep a platoon alive to find out KP was within four inches of it and so took the objective!

Flames of War Ranger for almost the entirety of Scotland Tournament organizer, general drummer of interest in all things FoW, TY and Tanks. Perpetual botherer of Matt Sulley at BF HQ.

Favourite Army- Almost anything British, but anything with Cromwells and Challengers in is a safe bet.

Best Wargaming Moment: Winning a Mid-War tournament with a silly throw-away list of 5 Panthers and some Pioneers.

Worst Wargaming Moment: Losing a game first turn because of a bad deployment, then my opponent’s recce rolling onto the objective.

Not one to do things by halves, Eddie has only been on the UK flames of war scene for over a year, but during that time has brought his own unique brand of ‘Hobby Hardcore’ to the community, building and painting new armies for every tournament he has attended – this is set to continue through 2015, as his Girlfriend has demanded he reduce his lead pile to prevent another ‘Hobby-launch’. Duncan wants to live in a world where dice only roll 6s and was a geek long before Glee made it trendy. A 2nd generation wargamer he’s dabbled in almost every mainstream wargame over past 20 odd years and been seriously playing Flames of War since the start of V3. A predominantly German player he has a frankly unhealthy obsession with captured equipment no matter how ineffective it might be.

Best Gaming Moment:- Being a multi-award winning Most Sporting player (2 is *multi* right?)

Biggest Wargaming Blunder:- Thinking – “How hard can it be to paint pea-dot camo?” or trying to move the Konigstiger from Atlantik Wall to cover an objective…#Fail Richard Hardy
So that’s me standing next to fellow Breakthrough Assault writer Alex Hamilton (on his right). I’ve been wargaming for over 35 years and playing competitively since the early 1990s, came to Flames of War when a move to the Midlands meant I could no longer get games of ancients, renaissance or Seven Years War which were my usual periods and needed to play something that wasn’t Games Workshop. Founder member of the Flames ETC Scotland team, and I think I just edge Mark Nisbet as being Breakthrough Assaults most northerly team member, thus stealing Alex’s title as Warden of The North (and bringing some much needed sense about which Rugby code is best)
Favourite Army – Anything Soviet (well it’s actually 7 Years War Austrians but….)
Best Wargaming Moment – ETC in Athens & a brilliant bloodbath of a game against Ben Davy at Campaign
Worst Wargaming Blunder – being 23.9999999 inches across the table and losing a game also at Campaign to Pete Simpson 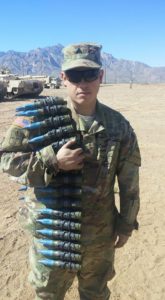 Alex Montalvo (The Yank)
I’ve been a wargamer since 2005, and have been playing Flames of War since 2014 and Team Yankee since its release. Some may find it odd as I wargame and do the real thing alongside it, having been and still am in the US Army for 18 years. I have been a long time fan of Breakthrough Assault and it was my go to for product reviews and new releases, and was honored when Mark and Lee offered me a spot on the team. I just hope they can tolerate my bastardized English and American idioms 🙂
Favorite Armies– Flames: US Armor  Team Yankee: US Armor (Army M60s)
Best Wargaming Moment– Taking 3rd at the 2019 Las Vegas Open Team Yankee Showdown after not having played for over a year and with a list I had never played until then.
Worst Wargaming Blunder– Learning you actually need to guard your objectives in the very first game of my very first tournament in 2015

Retired Members of the team

Matt is a relative newcomer to the competitive side of the hobby and has literally thrown himself into the deep end of the FOW scene by setting out to play as many games as humanly possible in an attempt to catch up with the ‘seasoned pros’!

Best Wargaming Moment:- Defeating Marc at Art of War and then the huge debate on the way home after as to what holds more ‘prestige’ – me winning our head to head game, or him finishing higher in the rankings!

Worst blunder:- Not listening to any advice regarding tigers and panthers (both in the same list) being too expensive for tournament play. I certainly learnt that the hard way!

winnerdave@breakthroughassault.co.uk
Dave is the painter of the group and an avid lover of airbrushes! Dave got his nickname as there are far too many Dave’s in the Bournemouth Wargaming area and we thought
names were nicer than numbering them. He was also on a long losing streak when we had decided we needed a name. This prompted his daughter to asking him why he was called Winner Dave as he always loses!Currently Working on:- Expanding LW Soviet ArmyFavourite Army:- Soviet Tankovy From Desperate MeasuresBest Gaming Moment:- Blowing up King Tigers with bum shotsBiggest Wargaming Blunder:- Taking a 1550pt list to a 1650pt tournament
fridaycoach handbags cyber monday

When not planning an army he can make from some random models he’s bought/was given he’s normally playing FOW or watching Bath play rugby.
Adam plays a load of different lists that includes (but is not limited too) British Paras, Welsh Guards, German Volksgrenadiers, Panzers on the Meuse, British Rifle Infantry,……etc, he’s just finished a Finnish army and has a bucket load of unbuilt US stuff as his next project.Favourite Army:- VolksgrenadiersBest Gaming Moment:- Beating KP 6-1 last round of Corrivaly 2014.Biggest Wargaming Blunder:- Buying 12 Staghounds

Coming over from Warhammer 40k at the start of 2015, Stuart is a relative newcomer to the scene but has jumped straight in. A serious tournament player, Stuart is known in his local area for starting a new army at every opportunity, and painting at a blazing fast speed. Stuart plays a little of everything having; Japanese, French, Italians, Americans, Germans, Soviets and most recently British Commandos.

Favorite Army – German Armored Panzergrenadiers. Capable of both attacking and defending equally well, and with so many support options they are an incredibly flexible force.

Best Wargaming Moment- Defeating my best friend Duncan McManis (playing since V1) on top table 6-1 to win my first tournament, 6 months after picking up the game. In his defense, it was mostly great dice and the FV Germans helping me out.

Worst Wargaming Blunder – At a National Tournament, leaving an objective unguarded thinking that transports could contest (ugh!). I was winning 6-1 until all of a sudden, I wasn’t.

Paul has been gaming for more than 25 years and is a Sydney local. He has moved on from various ancient rules set to FOW and now TY. He enjoys painting up new armies and likes to play a variety of different lists. When not gaming he enjoys spending time with his newborn son. He would love to say he follows the success of the Australian Cricket team and Rugby team but that seems a distant memory. Favourite Army:- Czech Panzer Company.
Best Gaming Moment:- Attending ETC 2015 in Prague.
Biggest Wargaming Blunder:- Thinking I could find a use for 37 MW German half-tracks.

We are happy to review any WW2 or Cold War gone hot related products. All you need to do is send them to us and we  will review them honestly.  We are focused on being a good source of independent wargaming advice, if we like something – we say so, if we don’t like something we will likewise say so. We will also talk about any reviews through our podcast, so they will get a double feature.

We will aim to get any reviews  posted as soon as possible and to the best of our ability. We will also post the reviews our FB  pages. Also any models that are sent are likely to be included in our After Action Reports getting even more views.

We will keep any products we are sent.

The guys at Breakthrough Assault