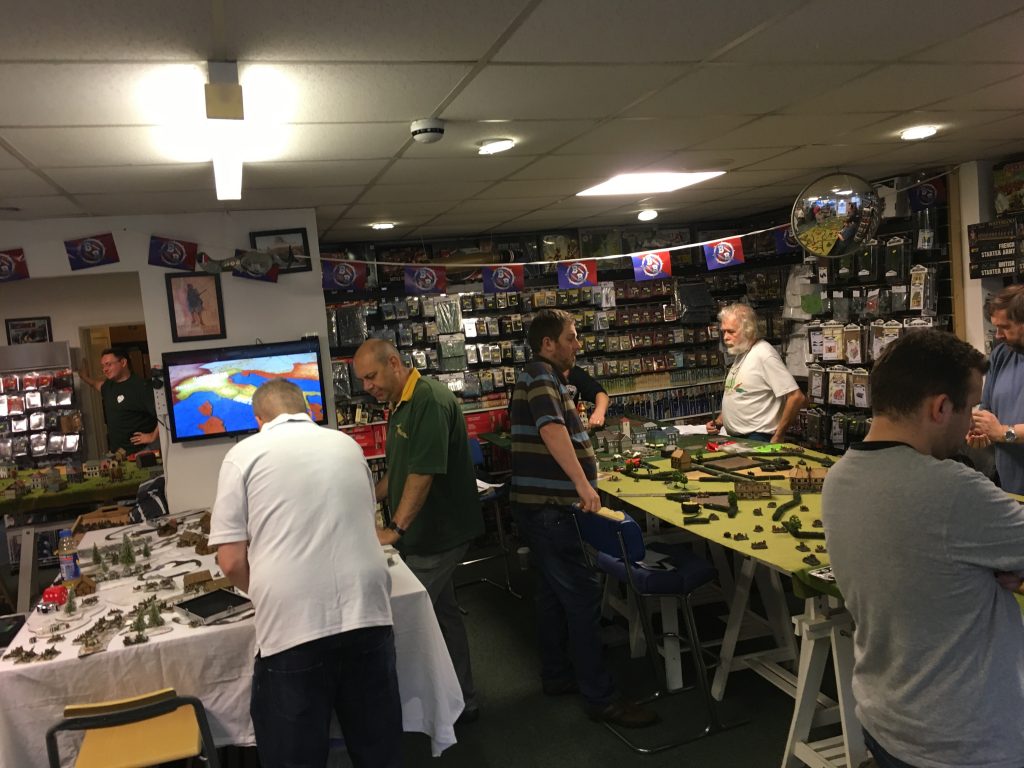 So just finished day two of our latest FoW tournament and relaxing with a glass of wine. (Ok I lie, I’ve got home, cooked a roast, burped my daughter and unloaded the dishes but you get me right?) and it’s been a great weekend. Planning an event is always an arse. There are the usual worries, will I get enough players, can I get enough terrain, what about prize support. Strangely all of those were not a problem, I was over subscribed, I had enough terrain, and prizes were all sorted – it was plain sailing. Then a week before whilst doing a teaching game I was told, I needed to drop two players – as the shop had so much Christmas stock they couldn’t fit the last 6*4. We discussed options, hire another room (would need 22 to cover that – and at short notice unlikely, thankfully someone dropped out, so then I didn’t play and it was all good! Then another dropped out, but thankfully found another player – so 14 in all!
It was a perfect axis/allies split as I had planned, I was slightly surprised that I only had 2 US lists – both infantry. Likewise, overall the allies only had one tank list – a Cromwell list. The axis was more varied – three tank lists, one mech, the rest were infantry. So with that mixture of lists I wanted to make life ‘interesting’ for the players, so thought I’d get a couple of Mobile battles in over the weekend. Mission selection is tough, with 5 games I like to have 2 of 2 types and 1 of the other. Being breakthrough assault, breakthrough is 9/10 game 1. Otherwise I like a fair fight, I used to like 2, but I like definite results now, and two games leading to mutual losses can hamstring that!

Finally for defensive missions, surrounded and cauldron don’t work in tournaments, so as a good end to day one, fighting withdrawal works, as you play until the game ends (except when your venue has a newly started board games night at 6 which stops that – c’est la vie!)
So I arrived at the venue, a few others were there already, gradually people arrive, terrain gets laid out. The plan was 9am

Arrival for 9:30 start, one player was late, we waited, it hit 9:45 and I just let everyone get on with it, I had no number for this player (lesson for next time) but after another few minutes I agreed to deploy my ‘filler’ army, and then of course at 10 they arrived – trains…
Running our event was easy, I’d rigged the draw a little to ensure round one people who played each other regularly didn’t get each other. The scoring was all about wins, as that’s what I wanted people to go for! Hence 100+ Fow score for a win, and just your FoW score for a loss – missions and scoring can really affect army composition!
The number of umpiring incidents in the entire event was minimal – people just got on with it, I spent more time making tea! Organising the draw and tables required some thought, but for day 2 I moved the terrain to keep it interesting. And saved me having to worry about tables. The
Also on day we had a drop out, thankfully they let me know so I could play a couple of games. They’d had German infantry, so I used an old Volksgrenadier list, which still worked in AO. As things were running smoothly and my army was small (top tip if you organise and play in an event, make sure your army is small so you can play quick and check on others!)
Due to it being Red vs Blue I had prizes for both 1st and 2nd on both sides (pretty important as 1st axis had less points than 4th allied!) the allies was a very close run race with both players getting wins in every round leading to it being decided on FoW points. The axis was a little bit more spread out on the points. The other prize was best sporting. It was really warming when I went through the nominations and found that every single allied player got a nomination – it means their either all bastards or all saints… I’ll go with the latter this once. As for the axis, it was a two horse race, and a dice roll decided the real best sport.