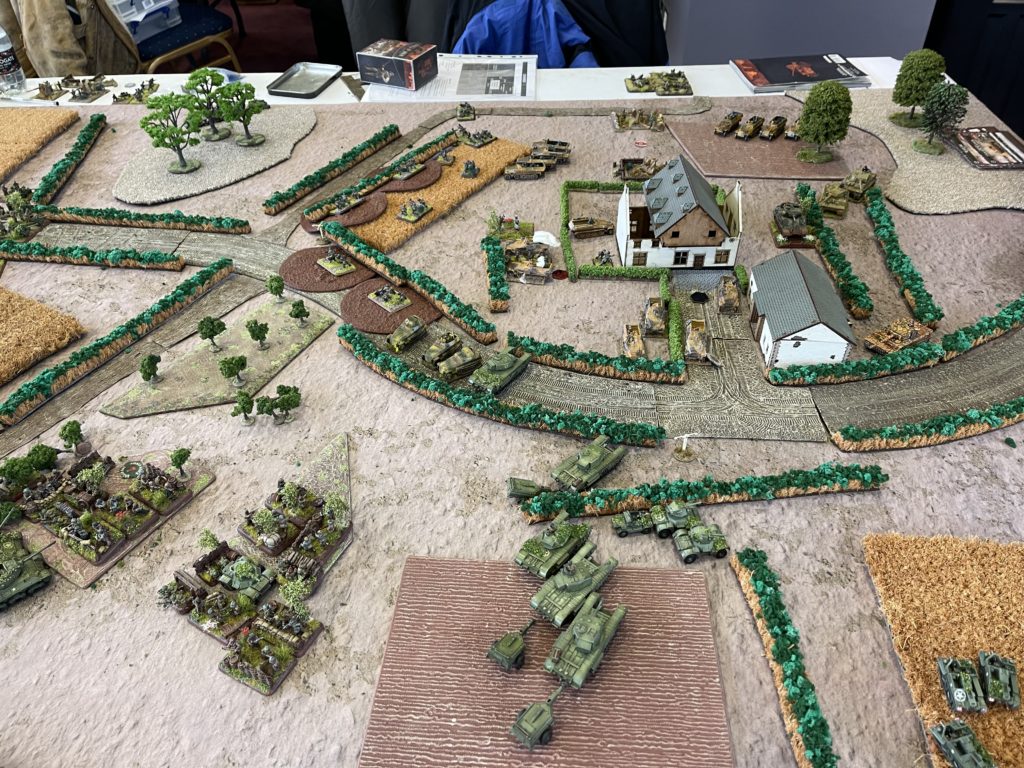 Five members of Breakthrough Assault braved storms and traffic to take part in the UK Nationals at Ascot Race course on 27/28th November 2021.  Congratulations to our own Martin Turner who won the event with his Finns and to Soren who got best painted.  I managed a respectable 5th place and best scenery.  Here is my experience of that weekend.

I chose to go with my British Recce for the event.  While a lot of people talk about running Brit Recce it seems few do.  There was only one other Brit Recce formation and it was very different (With a US Armored formation).  I felt the list had the following;

I started the event against a true FOW veteran, Mike ‘Santa’ Klaxa who was running a dual Finnish infantry formation.  He chose to defend and we rolled up Dogfight.  He made good use of his mines, even deploying in them to hold up my clearance operation.  Packing two platoons armed with FIVE panzerfausts, what he lacked in armour he made up in hand-held Anti-tank!  Unfortunately for him, his lack of AT really impacted him.  With lots of MGs to prevent any assault or the movement of his ‘fausts, my Crocs and AVREs did a lot of heavy lifting.  Concurrently my recce raced into his back line to assault his artillery in the side, along with his mortars.
As always with the Finns, his two-gun platoons of Pak40s hurt him, with a single kill causing the other to flee and his ambush of the other two lacking the punch needed.

MVP went to the aggressive FFI who managed to assault into a minefield, survive, then survive a round of shooting, clear it and then make it back to the safety of a church!

This was a bad matchup for Santa and it ended 8:1.

Next up was Paul and his Greyhound Armoured PanzerGrenadiers and almost the exact list I have used previously with its fearsome three-strong SS Tiger platoon single reserve option.   We ended up with me attacking in Cornered.  I rubbed my hands together at the prospect of a massive chained spearhead deployment ploy, alas his recce really shut that down.  I still managed to get my Crocs up close along with the AVRE who opened the game to two early Pak Kills.  The issue was the early reserve arrival of the Tigers who could avoid the 17pdrs line of sight.  That meant I had to take out the six stummels to allow my Achilles to come out and engage the Tigers.  Hitting on 6s takes a long time to kill six vehicles!  Having finally killed the Stummels, the recce, two PAKs and a platoon of infantry (maybe even his HQ), I was within 4 inches of both objectives.  Alas time ran out for a 3:3 draw.  In retrospect had I gone defend as well then a meeting engagement may have benefitted me more than attacking.

Time to face Andy’s Greyhound Armoured PanzerGrenadiers list, although somewhat different with a pair of Elephants and three German and three Hungarian Hetzers! We rolled up outflanked, again with me attacking.
I extended my deployment with Spreadhead and immediately went for the forward objective in a forest.  This would prevent LOS to the Elephants as they came on from reserve along with the 88s.  It was all going well until six Stummels popped in the back of the forest.  With them gone to ground and with enough MGs to prevent an assault, it took too long to shift.

The Achilles get MVP as they managed to knock out an Elephant in the flank causing the other beast to flee.  I went for the other objective in a hail Mary move with my recce.  They managed to assault off his infantry so I could contest however his armoured mortars quickly raced to the rescue.  With six turns not met the game timed out but bagged me 3 points, meaning I finished the day 10th with 14.

Day 2 started with something different.  A British late Churchill Company expertly played by Alex.  This time I lost the dice off and had to defend in Breakthrough.  I think losing this roll was perhaps the most important dice roll to the outcome.  With three Core platoons (inc HQ) of Churchills, I knew that my high AT would be vital; I had to break his company.   He attacked aggressively claiming two 17pdrs to his Crocs, followed by another until the last one burnt to a crisp.  With one of his Churchill platoons in flanking reserve I concentrated on the other.  Here the dice gods failed me, having killed one, I just couldn’t get the other, constantly failing firepower.
I popped my ambush to nab the HQ.  Despite four hits on the HQ in various turns at close range, he saved them all!  By this time, platoon 1one was gone and I had killed the rest of his core formation (Stuarts and Crusader AA) bar his HQ and Platoon 2.  Finally I lost my Achilles.  With no chance to realistically kill his HQ let along his platoon of three Churchills, but with my cars ready to go to ground on the objective, we knew the game would stalemate and we walked away with a 3-3.

A really close game, a single roll could have changed it to a 6:3 for me, but Alex played his small force beautifully.

Steve Hughes was my final game, he is a great player and lovely guy who deservingly took away the coveted Best Sportsman award.

He was also running a British Recce company with the same core as myself but with the motor platoon.  He had gone with a US Veteran Sherman formation as well including five 76mm Shermans, Stuarts and armoured mortars.

I chose to defend and got Escape.  I put the Crocs and AVREs in reserve with the plan to come on behind him and squish the mortars and/or 6pdrs.  By then I hoped to have killed the armoured cars causing the army to break.  Steve went all in attacking aggressively on both flanks.
I immediately ambushed the Achilles, ignoring the US armour and engaging with massive overkill on the armoured cars.  The 17Pdrs and 6pdrs added to the fire on the other flank.
Steve smoked my Achilles but made a mistake with placement allowing me to blitz forward and bypass it, adding more hurt on the armoured cars leaving just the HQ on that flank.
The 6Pdrs stayed pinned suffering multiple bombardments and bags of MGs.
Steve lined up to assault on my left flank however, he failed to range in his smoke!  At this point the Crocs were engaging his mortars with the AVREs also dashing behind his force.  While his 76mm nailed a Croc with a side shot, he threw everything at my squishy cars to earn some points, but by the end of turn 5 his force was spent and only a 6pdr, Croc and two armoured cars had been lost for a 8:1 win.  Had that smoke got in then things would have become a lot more worrying!

With a final score of 25 I managed 5th place which I was surprised at given the two draws.  I played new and old players alike both in attack and defence.  Also I got to meet Scott Roach from NDNG as well as my Scandinavian friends from the ETC and the Polar Bear Icelandic tournament (next one in Jan 22).

Thanks to Ian for organising and to all five of my opponents for a fun weekend.