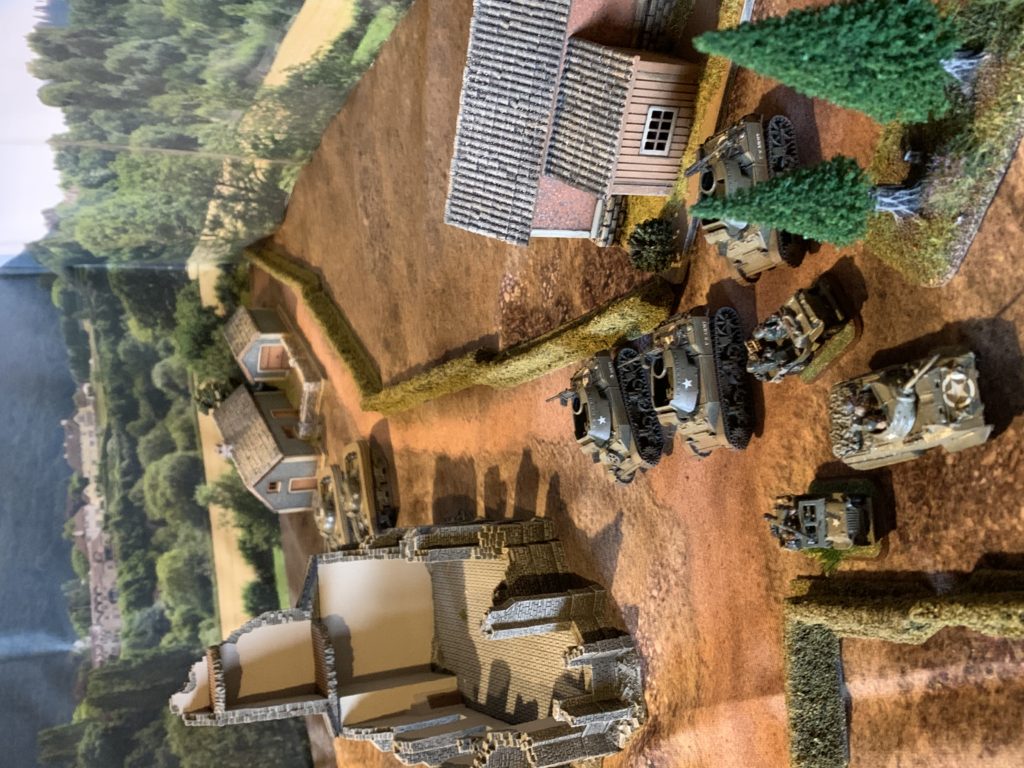 Vanguard: US vs Germans

As we discussed a few weeks ago in our article here, Battlefront have released a new Missions pack.  While not included in its expanded mission matrix, a very different type of mission was also added; “Vanguard”.  I thought it would be good fun to dust off a couple of armies and give it a go.  So read on and enjoy the batrep and some conclusions and thoughts about the mission at the end.

Vanguard is very different to the typical FOW mission.  Firstly you have to break your force into three parts as your total force, the scout force (15%), vanguard (35%) and main force (50%).  You start with only your scout force, then get your vanguard force on turn 3 and main force on turn 5.  No rolling for reserves.  Additionally you take objectives differently.  In this mission you accumulate VPs for each objective in the enemy half of the table you end your turn within 4 inches of (so long as you didn’t dash and can’t be gone to ground).  You can’t contest and stop this.

With that in mind I set up a new battlefield I have been working on.  The river is just a cross check and the bocage acts as normal short terrain.

The two armies are a classic match up for Armoured Rifles and Shermans vs Heer 116th Div Panzergrenadiers and SS Heavy support.

Next the forces had to be split down:

The Germans advanced their armoured flame-throwers towards the river while moving the Stummels into a overwatch position behind the hedge.  The idea was to go for the objective on the far side of the river quickly, engaging the US soft targets with the Stummels if they advance.  The 250s raced along the road to take up position near the bridge waiting to see what the enemy Shermans did.

The two Sherman DDs dashed onto the hill to provide overwatch and protect their objective.  In the centre the Cav and Scotts move into the plowed field.  The 37mm opened up but couldn’t get a bead on the half tracks, neither could the .50cal from the jeep.

The Flame Halftracks easily forded the river and took up position by the hedge.  They managed to end the turn within 4 inches of an objective in the enemy half of the table.  Now they needed to just stay there!  Meanwhile the Stummels engaged the recce patrol and, surprisingly, managed to blow up the Greyhound and kill a jeep.  The recce failed their last stand and the remaining jeep fell back at the start of the next turn. The other German recce stayed still; the hill overlooking them had a pair of Shermans on and that would be a suicide run.

The Scotts move out of sight of the stummels and engaged the flame halftracks without success.  They can’t advance as they would easily be picked off.  The Sherman DDs head for the enemy objective to start claiming some points.

The Vanguard force arrives.  The Panthers moved up the side of the river engaging the Sherman DDs but couldn’t hit their target.  The Panzer Grenadiers dashed up towards the house beside the road, bravely following their leader with a “follow me” roll.  The flamers stayed where they are as they already have the objective.  The 250s moved up to the bridge and engage the Scotts with no success.  The Stummels also dashed and use a “follow me” to relocate to the cover the other objective.

The US Vanguard also arrives and the halftracks use the road to dash up.  The Shermans dashed behind the hill to also threaten the objective while the two platoons of armoured mortars dashed up and took hull down positions on the hill thanks to some “follow me” rolls.  Again the Scotts engaged the flamethrowers and, this time, bail one.  The HQ Shermans have moved onto the far objective,  fording the river to claim a point. However, they can’t kill the scouts on the bridge.

The Flame Halftracks stayed put to score a VP and the 250s moved up to claim another objective.  By this stage they could either grab a point or die due to the 50cals coming their way.  The Stummels moved two vehicles over the hedge and engaged the Sherman HQ, killing one.  The infantry moved up again, closing in on the contested area.  Meanwhile the Panthers engaged the Scotts and Armoured Rifles.  Two Halftracks brew up with another bailed, killing embarked LMG, Bazooka and rifle teams.  A Scott is also bailed.

In the US turn the Armoured Rifle stubbornly refusef to unpin and the whole platoon dismounted.  The mortar carriers used their 50cals to engage the scouts, bailing all 3 of them.  The HQ Sherman failed to hit the Stummels as the other Sherman platoon moved up with two crossing the river.

Main force time!  The Tigers came on, successfully crossed a hedge and engaged the Shermans, but no hits.  The Panthers advanced, although one failed a cross check, and they were supported by the newly arrived armoured Panzergrenadiers, plus a third platoon of infantry with three Panzershreks who moved off to reinforce the objective held by the Flame Throwers.  With help on the way, the flame throwers blitzed forward and engaged a Scott, bailing it.  The 250s remounted two vehicles, claiming another VP all while killing a mortar!  The Stummels continued to engage the Shermans, double bailing two (which both hold).  However, with just the HQ tank left and the Panzergrenadiers passing a “follow me” move, they just managed to assault with two stands. They dodged the tanks hail of fire and blew it apart with a well placed Panzerfaust, killing the HQ and capturing the two bailed Shermans.

The US forces moved to keep the pressure up pushing two Shermans to their side of the river, but just close enough to claim a VP.   With the main force arrived another three Shermans who dashed behind the hill, while the 76mm Shermans swiung wide, ready to engage the Panthers next turn.  The second armoured rifle platoon also dashed towards the far objective.  Meanwhile 1st platoon had unpinned and engaged the Flamers with their bazookas, but failed to hit.  This became a common theme for the whole turn with only a single Scout bailed!

The scouts definitely claimed most valuable unit as they managed to remount, meaning no last stand and another VP.  They moved behind the hill, determined not to push their luck further.  The Stummels bailed two Shermans near the objective, which cleared the way for a brave fire team to assault over the stream, dodging the 50cal shots from an armoured mortar.  They managed to blow a Sherman up and the halftrack backed off.  The infantry consolidated back behind the hedge.   The still advancing Tiger then claimed another Sherman while the flame throwers killed a pair of Scotts, forcing the remaining one to flee.  Panther fire versus the 76mms missed due to the range.

The US knew they were done but kept firing.  The 76mm Shermans scored two hits on the Panthers but they easily save.  The 50cals and bazookas claimed three Armoured Flame-Throwers but still the 250s won’t die, saving FOUR 50cal hits.

Well that could have gone better for the US forces!  I must admit I thought the amount of US armour and fire power plus number of units would easily have won this, just from list and scenario planning.  In the end the Germans lost just three Flamers and a SdKfz250.

First off, the scenario is pretty fun, I actually enjoyed the early game quite a lot; it was tense.  However, if you don’t have a force that effectively works at 15pts then you will struggle; you really need a minimum of two and really three units on table.  For this reason I am glad the mission isn’t in the expanded mission matrix.  However, I may consider doing it as a final game at a event, allowing a specific army list for it.

I genuinely think turn 1 is more important here than in any other game.  Going first means you can score points first and also means you can take up position first.  Had the US gone first then they may have caught the Flame Half Tracks at the river edge, stopping them taking the objective.  This would have fixed the Stummels in place to overwatch the objective saving the HQ tanks.  Also the early death of the US Recce meant that they were now on the back foot and, once there, struggled to recover.  As soon as your opponent takes the lead you have to have two objectives to pull that back, and that’s tough.

I would point out the Germans were crazy lucky with those scouts.  That 3pt unit claimed 3 VPs on their own; I never expected them to survive.  This leads me to my final thought.  While in normal games of FOW you balance winning with loss of units to get VPs, here you have no reason to hold back, every VP counts so you have to push and perhaps the Scotts should have sacrificed themselves for 1 (maybe 2) VPs.

Regardless the scenario was good fun and presented loads of challenges, choices and maneuver.  Give it a go.