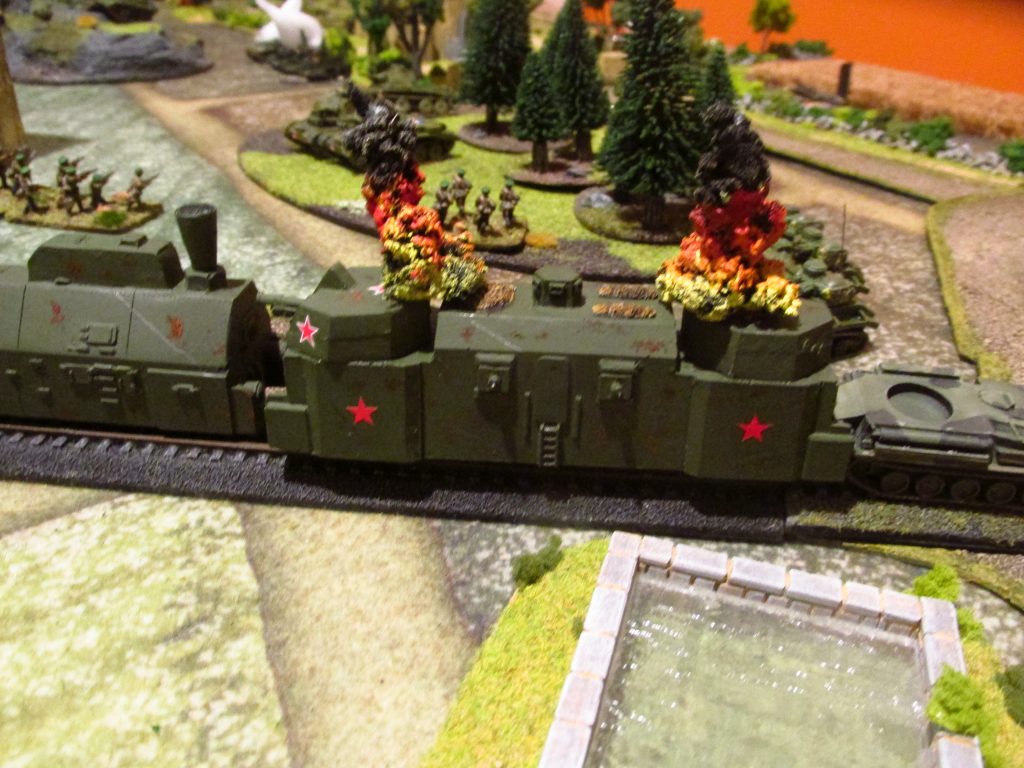 Whilst having a Team Yankee game, Mark had said that he was looking to use a Red Banner infantry list with the Armoured Train at Sturm in early March 2017; he just needed to find someone with a train and some extra Soviet infantry.

Oddly enough he was talking to just the right person, so we agreed that our next game would be a trial game for Storm with me taking a Char B company to test out the list

Mark then decided he had to give Storm a miss but we went ahead with our midweek game, but instead of a v3 competition practice, we decided to give v4 EW a go, and because I hadn’t used them in ages I switched from Char Bs to my Blitzkrieg British Armoured Regiment list Rather than give a turn by turn account of the game, I’ll give a fairly brief precise of what happened and then go through what I found was different, and give a personal view of the pros and cons we encountered

We rolled up a scenario and got one of the new ones, Annihilation; in this scenario there are no objectives and you gain the win by breaking your opponents formation. We then rolled off to see who was the attacker – me, so I deployed first.

Mark had half of his platoons off table (Armoured Train, attached Infantry and attached armoured cars), but I knew they would arrive on turn 1. I used my Recce carriers to create an advanced bubble to deploy some A13s and MkVIcs behind a hill to try and hit the train on the first go, and then tried to hide everything else. Mark deployed his two infantry companies and four-gun 45mm Battery around the railway track entry point

Mark won the dice off for who went first and the train steamed on with the 3 BA6s deployed at the front. The only thing that the they could see however was my poor recce carriers, now totally unable to run away.  They got the full amount of incoming – 4 x 45mm shots and 2 x 75mm shots which took out 2 and bailed 1. That pretty much concluded Mark’s go, so over to me.

I passed the morale test for the Recce Carriers (and here we made a mistake, because after passing once I didn’t take any further tests when in fact I should have taken one every turn, because being down to 1 carrier I was never again in ‘good spirits’).  I decided to try and blitz move my A13s and MkVIcs onto the hill to have a go at the train, even if I failed I would still be hitting on 3s, the A13s succeeded but the MKVIs failed, I also moved one of my Troop HQ units and a Troop of A13s  so that I could shoot at the BA6s. Sadly for Mark the result was fairly devastating, both the Gun carriages of the train were knocked out, though the locomotive survived, and two out of three BA6s were knocked out. So a successful turn for the Brits!

Mark passed the two morale tests for the Armoured Train and Armoured Cars; again we made a slight mistake here as the Armoured Car platoon had 3 cars at the front and 2 cars at the rear of the train, and so it seemed that the one remaining BA6, who was the commander, was now out of command of the two BA20s lurking at the rear – however a read of the EW special rules later showed that Train Tank Platoons are always in command. So now he opened up with his 45mm Anti-Tank guns against my A13s, needing 4s to hit ……..

In fairness it must be pointed out that Mark’s dice were not only bad at hitting, but they were just as bad at rolling firepower checks too.  He blamed the Welsh ETC dice he was using; little did he know that I actually procured those dice for Team Wales and so they were obviously staying loyal to their first owner !
Again a short turn, back over to me. I started to manoeuvre the bulk of my troops to try and get round Marks left flank and target his anti-tank, but the A13s decided to see if the new “No HE rule” would give them a chance and so the stood fast on the hill and traded shots with the Soviet gunners

This proved to be an error as although I did 2 hits Mark saved them both. Fortunately, although his return fire was more effective in terms of hits, I was able to save 2 tanks and Mark failed a firepower test on the other so only one tank was bailed.

Leaving behind the bailed A13 (it took 3 turns to remount under fire which was fortunately ineffective), I concentrated my tanks on dealing with the Armoured Train mounted platoon which had assaulted my centre A13 platoon in a wood. It took a number of turns but eventually I was able to whittle down the platoon to the two teams necessary to take a test

Once the wood was secured I continued the move of forces to the left, my plan being to overwhelm Marks two guns on that flank with a combination of Close Support tank, MG fire, and 2pdr shots. I worked on an assumption that eventually he’d throw some 1s and 2s!

The duel was prolonged, with Mark saving the hits I had, whilst I saved most of the return fire and, when I didn’t save, Mark’s terrible dice scores came to my rescue

I did eventually lose two Close Support A9s, but I got both the guns, and a sneaky pair of MkVIc sniped off a 3rd.  Mark failed the unit test, and that’s where we called it to avoid another 30-60 minutes of me sitting at 16 inches and shelling him to death.

Secondly  I like the fact that Anti- Tank guns are more survivable in a stand up fight against tanks.  I think this is much more historic.

Thirdly,  I really like the Christie suspension love that BF have given to my Cruisers, finally giving them that speed edge that they had.   I look forward to trying it out with my BTs and T34s too!

Firstly, and this is a small point really, the scenario Annihilation doesn’t really add anything in my opinion.

The rules encourage people to play it as a starter scenario. If I were to be controversial, I might ask why Free For All isn’t an easy enough starting point for newcomers, without the addition of a “use and forget” mission which will likely never feature in games between experienced players (maybe it could have been offered as a free download).

Secondly, and this is the big one for me, I’m not sure about the new morale rules.  I think it makes British 3 tank platoons very vulnerable, both initially and because passing once doesn’t guarantee safety until the next effective hit (I really worry about my 2 gun Finnish anti-tank teams). There is a seemingly big shift to large Infantry and tank units. Moreover the Formation ‘Last Stand’ rule could make dealing with heavy tanks or Strelk blobs quite difficult as the previous ability to kill the supports will no longer work.

Thirdly, again a minor issue, there were a couple of quirky outcomes from special rules.  For example, British MkVI C tanks get a 12 inch move, whereas the MkVI B – identical except for the main armament, only moves 10″ as the C had ‘Tally Ho’ in V3, and the B didn’t and the rules grant an extra 2 inch move to tanks which had ‘Tally Ho’ previously.

Fourthly – Recce; the ‘Spearhead’ rule is not as good as it first looks in my opinion, and the loss of the ability to break off, or remove gone to ground substantially alters recce for the worse. The possible uses I can see are more related to Formation morale than tactical battlefield use.

Lastly, and I admit that this is the historian in me coming to the fore, the new No HE rule gives a tactical ability to the British that really didn’t exist. It was extremely unusual for British tanks to stand off and waste solid AP rounds on the off chance that they would hit a breach mechanism, or other equally small target.

Because of the forces chosen there were a couple of rules which we didn’t get to test out.

Firstly, the new artillery rules; the British don’t have any, and Marks train was always going to be more useful in the direct fire support role.

Secondly, assaults; we only had one, when Mark’s armoured train infantry assaulted the wood and I was able to stop it with shooting; though it should be noted we thought it might be difficult to get the 12 stands necessary for the 8 hits rule to come into play actually into the assault.

So we’re planning another game soon with artillery and a bit more chance of assaults occurring.

Those of you that know me will know I have been quite skeptical about whether v4 represents a progression or a regression, and I have to admit to having been quite worried that my enjoyment would drop off. In the end it was a fun game; a good opponent always helps with that. It still felt like Flames and so I probably won’t be selling all my stuff.

I’m still a bit skeptical, especially over morale, but I’m not that discouraged to the point that I won’t be going back for seconds.