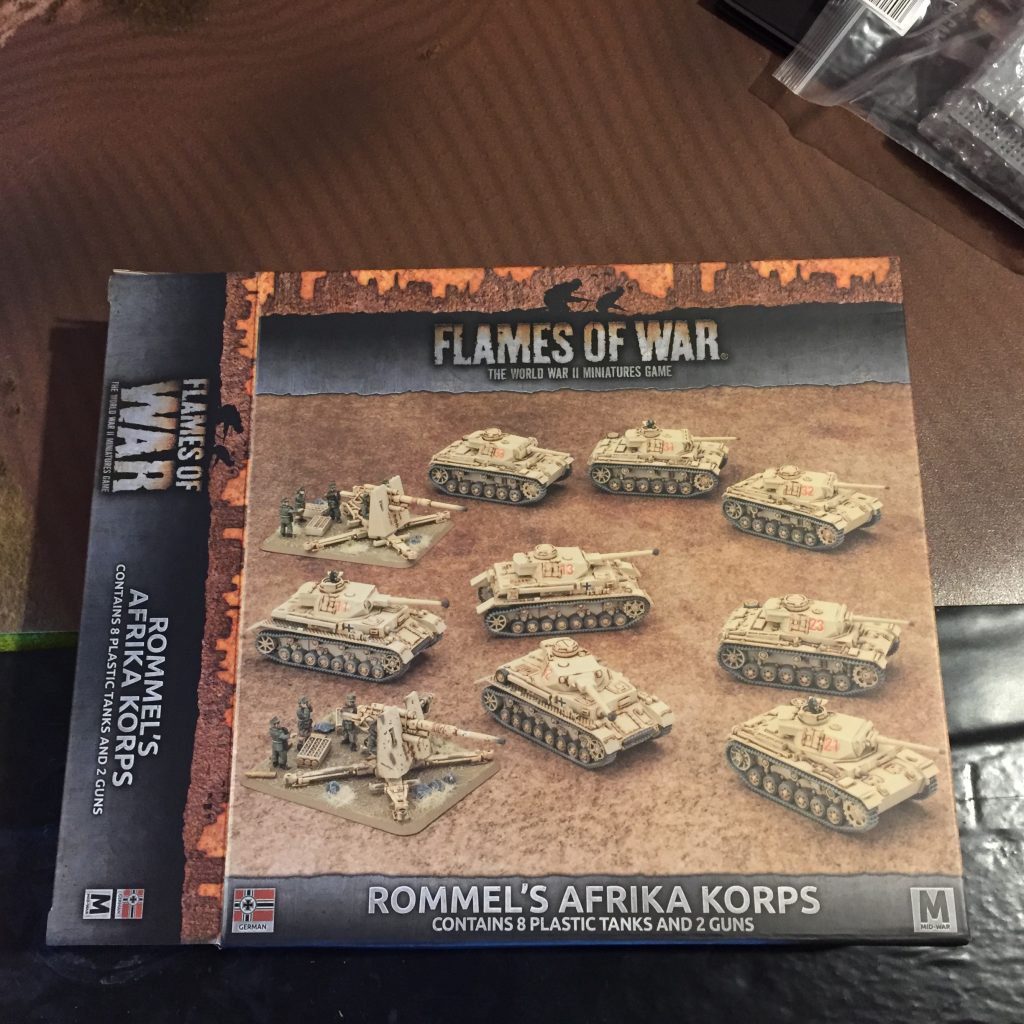 Mark was lucky enough to get his hands on an Afrika Corps starter set a week before release and today reviews what’s inside.

The Afrika Corp starter set functions in a very similar manner to the recent Team Yankee sets, with a similar price tag at 55 GBP.  It gives you a nice sample of the 3 new German plastic.  So what do you get

– Mini V4 MW rule book:  This is similar to the Team Yankee mini rule book and has a different bounding (and is much thinner) than the old V3 rule book which had the notorious falling apart issues.  No worries about that this time.

– 3 x Panzer 4 plastic tanks that can be assembled as long or short barrelled.

– A set of cards for the set:  nice to see that they are now bigger than the Team Yankee ones allowing more information to be printed.

While I know this sounds a bit odd, but I have to mention the box.  The Team Yankee and recent LW sets have had very flimsy boxes which had a habit of collapsing and being crushed.  The new box is thick and protects everything inside really well.  I mention this because it will actually become a nice box for storing things on my gaming shelves!

No great surprises here, except the colour of the plastic.  Ill be interested to see if the light sand colour paints up any differently to the traditional grey plastic.  The models themselves are quick to assemble and the instructions are easy to understand.  You also get some extras such as fuel cans, ammo tins and shells for the Flak 88s. Just a sample of the various cards so you can see the design.

The set on its own can not make a valid formation as you cant make 2 x combat platoons.  However if like me you purchase 2 sets then you have quite a nice little force for with many options. You could field both a Panzer 3 formation and a Panzer 4 formation with the sets, all backed up by some vicious anti tank guns.  With 2 sets you could look at this

For an investment of 99GBP (after normal retailer 10% discount) you are good to go with a typical 100pt game.  With 18 tanks and 4 guns that works out at less than 5 GBP a sprue and that’s before you count the rulebook and decals.

You have great anti tank with the Flak88s, 14 veteran tanks with FA5, a bombardment with FP4+ to dig out those guns and pesky infantry.  Okay is it the optimal build, well no but id happily play it.  One easy swap out is the long barrel for 2 x 8 rads as a further purchase to allow spearhead and to go and sit by likely ambush points.