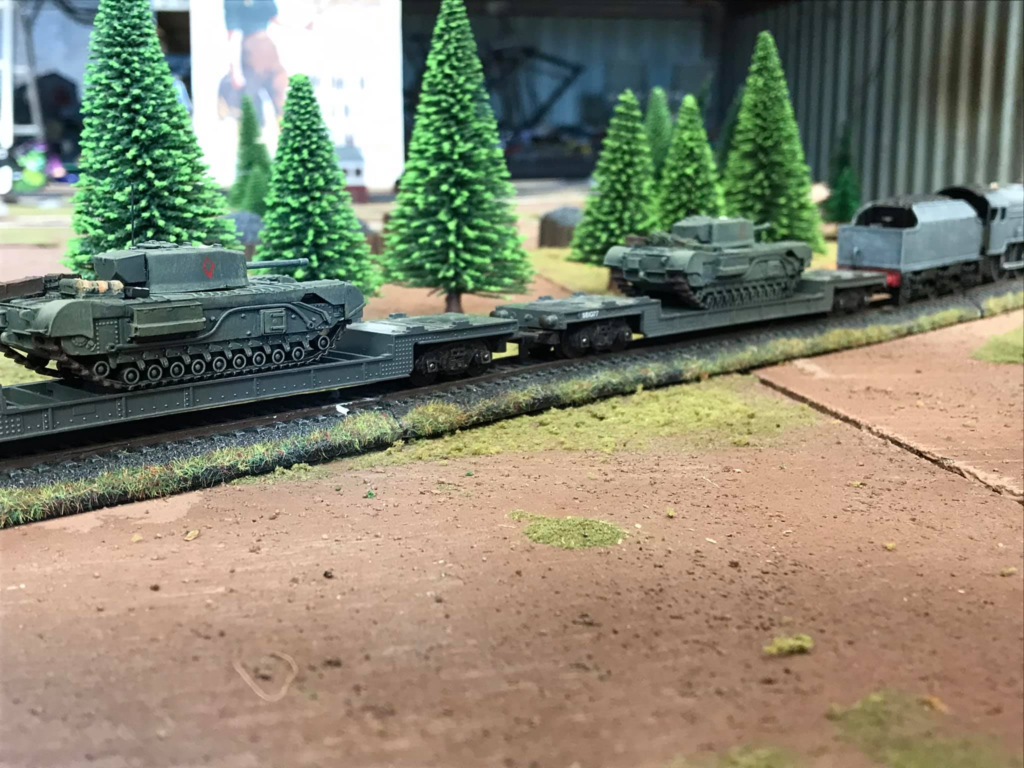 Trains of War! Modelling and gaming with locomotives and trains in Flames of War.

Today we bring you a guest article from a friend of the blog and podcast, Mike Everest as he talks about adding Trains to your terrain portfolio.

As many of you know, lots of the boards I run up with terrain at the barn often feature railways, railheads, shunting yards and industrial complexes around marshalling yards. Growing up around steam for my entire life has given me a healthy love of all things that go ‘choo choo’. In fact, the first vehicle I ever drove was a 1915 Aveling and Porter Steam Roller named Hengist. I was about 8. It stayed with me forever.

What To Model On The Table

Railways are an integral part of the Second World War. They allow the arterial movement of armies in Europe, entire campaigns are fought over them during the Desert War, ultimately they act as a lynchpin for both armies to move supplies, and in the war’s darkest moments, allows the Nazis to enact, quite literally, the final solution. So we can’t understate their importance historically.
As a tabletop piece, I like to use one of three features to engage across.

Where To Get Track

The track is obviously the primary concern with railways. As it stands, to make the battlefield look good, you don’t even need the trains to be there at all if you cant get them! The track is arguably the most important bit. There are two scales that people can use. Both have their pros and cons.

CHOO CHOO! Where to get Locomotives and what locomotives to get

As you can probably imagine, locomotives in the period we are playing come in quite literally thousands of different forms. It’s important to remember that continental locos are going to be different from British ones. In my experience, the locos available on a lot of 3D printing sites don’t really cut the mustard, so much so that for 28mm gaming, I commissioned my own Locomotive to be sculpted and then printed. This was a massive undertaking but the results were absolutely incredible.
Added here for no reason other than me wanting to show off; here’s what you can do with an extraordinarily talented digital sculptor Mike South, and some original plans.

On a 1:100 scale make sure you stick with your track bed scale all the way through. Things in varying scales look weird and don’t sit right. TT Scale locos can be incredibly expensive if you want them to move. Since we are playing toy soldiers rather than literally setting fire to our money with the incredible past time of model railways, after some time of searching I discovered a fantastic resource.
Atlas models, through Deagostini magazines, produced a series of locos in 1:100 scale. Huge numbers of them and continental models as well! These static models are mounted by three screws on a display track which can be easily snipped off. Once cleaned, these pieces sit perfectly on a 1:100 scale and the TT track and the Battlefront track seat them absolutely perfectly! Head onto eBay and search for Atlas 1:100 Trains and a huge raft of them come up. For as low as £8 they won’t break the bank at all.

Choosing your locos for the European theatre might seem daunting, but French rail companies, the Deutsche Reichsbahn and Italian rail companies used vast numbers of different locos. For German stuff, the DB01 is a superb centrepiece for your battles, with its iconic lines. Atlas also sell a DB05 with Streamlining. These saw express rail service, but like literally every single other loco the Germans had, it was pressed into action to move troops, tanks, supplies, materiel etc.
Some cracking web pages I used for inspiration on what to look for.

Finally, with locos, if you have the old pieces or are literally made of silk socks Michael Bay money, then Battlefronts now long since out of stock Armoured Train pieces are absolutely astonishingly beautiful. Armoured trains were used right up until the end of the war all across the theatres. They didn’t see front line action but were still useful for ‘anti partisan’ action. So if you have them, it’s wonderful to see them on the board.

Now, as cool as it might be to have a shunting yard absolutely rammed to the gunwales with rolling stock, in a 15mm company/battalion engagement scale wargame, that can become very unwieldy quickly. That said, watching your unit of Soviet scouts sneaking their way down between two goods trains will look incredible.

Flatbed trucks work excellently in-game, but having a large tall, line of sight blocking piece of terrain can give a taxing tactical decision to think upon. People often put too much credence in a desire to be able to shoot 40 inches with their 8.8cm pieces totally unobstructed, when in truth, a marshalling yard simply isn’t going to have that and having a million high power AT guns on either side with nothing obstructing them is both broadly ahistorical in later war and no fun at all. (See @reassessHistory discussing the myths of ‘good tank country’ being also ‘really good Anti-tank gun country’). Model railway conventions, traders groups and the likes will often be selling stuff on TT scale, and if you aren’t worried about waiting, you can get some cracking deals. I managed to get my rolling stock for an absolute steal on eBay.

Game-wise for terrain, we have a general rule of thumb that the Locomotives themselves are Tall, bulletproof terrain that infantry can pass through (climbing under them, between tender and main loco etc).
Flatbed wagons are low bulletproof terrain, similar to walls.
Tall wagons like boxcars, milk tankers, coal and aggregate wagons etc are tall bulletproof terrain. The latter can quite easily dominate a board so, when laying the terrain, make sure you are careful to not hog the board with them unless your intention is to have a very close set of infantry type engagements.

So there we have it! I hope to see your lovely railway boards! Here are some pics of some of my favourite railway board builds in action!