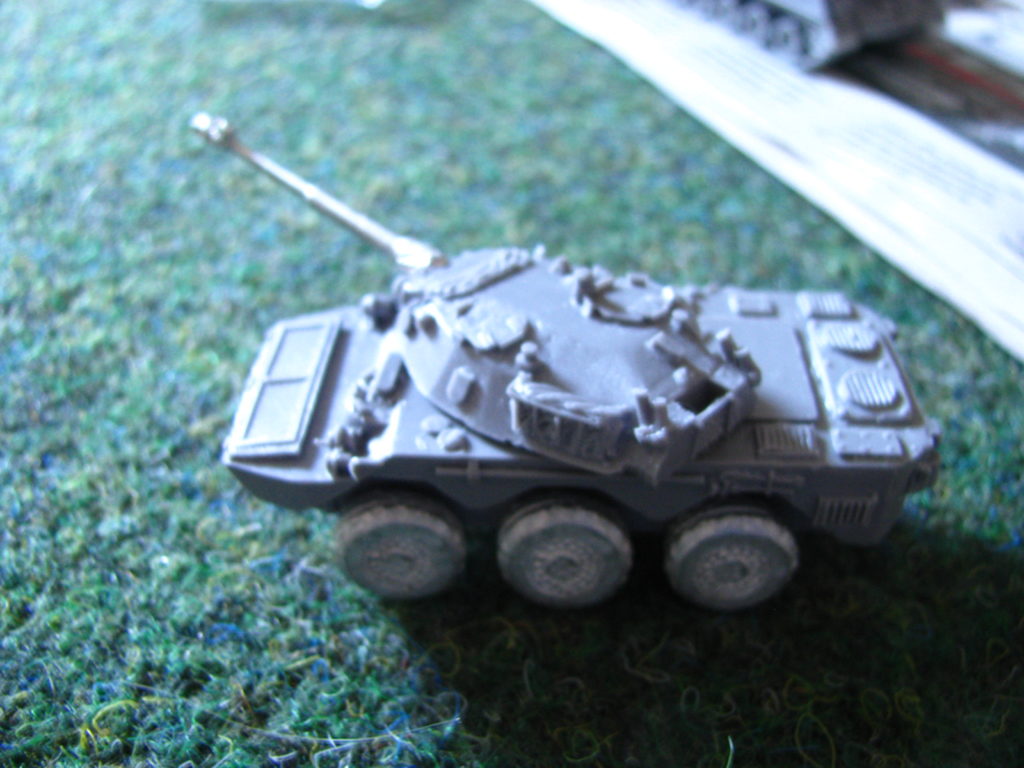 Today Richard looks at some French models by Totentanz.

The guys at Totentanz very kindly sent us a selection of their new French vehicles to review.  The kits were part of their Southern Flank Kickstarter, which by their own admission didn’t go exactly to plan , all I can say is that in my dealings with the company their customer service has been second to none and communications very quick and clear, so people should have no concerns with buying from them if you like what you see

First up the AMX30. Born out of the Franco-Italo-German project to produce a new battle tank in the 1950s the AMX30 entered French service in 1966 following the decision by France and Germany not to pursue a common project. It does, however, bear many similarities to the German Leopard 1 which shares the same genesis. The French believed that it would have required too much armour to protect against the latest anti-tank threats, thereby reducing the tank’s manoeuvrability. Protection, instead, was provided by the speed and the compact dimensions of the vehicle, including a height of 2.28 metres. In the late 1970s, the French began an upgrade programme and in 1982 the improved AMX30B2 vehicle with improved suspension, low light TV, laser rangefinder and fire control system

The kit depicts an original AMX30 vehicle and consists of 12 pieces, Hull (resin), Turret (resin), gun barrel, Cupola, Cupola hatch, Cupola MG, co-ax 20mm and 5 pieces of stowage to fit in the turret bustle rack, all of which are cast in metal. The kit also came with 2 rare earth magnets. The hull body has a nice amount of detail, and as mentioned the turret has a bustle ring cast on into which you can fit the stowage pieces provided. The kit went together nicely, except I did struggle to get the barrel to locate quite as snugly as I would have liked. The stowage pieces are a nice touch. There is nothing wrong with the kit, but of the ones provided I suspect it will be the one which perhaps picks up the least sales, as it’s the slightly earlier version (as opposed to the B2 version in Free Nations) and it will compete against a plastic kit from Battlefront (which will be packaged with a couple of Gazelles, increasing its attractiveness)

Just as the AMX30 is a contemporary of the Leopard 1 then the AMX10P is contemporaneous with the Marder, entering service with the French Army in 1973, and sporting a 20mm autocannon and co-ax MG, the AMX10P forms the basis of the Compagnie de Chasseurs. The kit is a very simple 3 piece kit all in resin, consisting of the hull, a gun mounting and the gun barrel which fits easily into the gun mounting. The gun mounting fits snugly into the hull enabling traverse without too much worry about them parting company. As the gun barrel is a resin casting some of them may need a small amount of hot water immersion to gentle straighten. easy of assembly means that a whole company can be constructed very quickly, and the model takes paint well. the kit has a nice amount of detail on the body with the hatches, engine deck and assorted tools standing out nicely.  Again this is a vehicle which will compete with a plastic Battlefront competitor, but I like it as a kit

The AMX-30R (Roland) surface-to-air missile launching system began development in 1974. Five vehicles of a pre-series were completed by 1977 and then evaluated, prompting the order of 183 vehicles that same year. The Roland includes a rectangular superstructure, taller than that of both the AMX-30D and the Pluton, which houses the radar system and mounts two launching tubes on either side, with an autoloading system feeding from an eight missile reserve inside the superstructure. The Roland’s exploration radar has a detection range of 16 kilometres (9.9 mi).  The Roland will be vital to the provision of AA cover to your French force

The kit is a nice simple 5 piece kit, cast all in resin, with the Hull, turret mount, two launch tubes and radar aerial. It fits together really nicely, with the ability to have the launch tubes at whatever angle you wish. The detail on the hull is good, including a spare track linked modelled over the glacis plate. Again this is a nice easy kit to construct, with good detail

Like the Roland AAGW vehicle the canon automoteur de 155 GCT (for Grande Cadence de Tir, fast rate of fire) was developed based on the AMX-30 chassis it’s referred to by the French as the AuF1. The 155-millimetre (6.1 in) howitzer was 40 calibres long and was autoloaded allowing it a rate of fire of eight rounds per minute, with a maximum range of 30 kilometres (19 mi) with the LU211 round. The turret enables the gun to have an elevation of up to 66 degrees and allows it to traverse a full 360 degrees. The vehicle carries 42 rounds of ammunition, with combustible cartridge cases. The origins of the decision to design a self-propelled howitzer can be traced back to 1969, with the first prototype completed in 1972. By 1979, seven prototypes had been produced, and six pre-series vehicles, followed by the production of 110 vehicles. This order was later increased to 190. The long lead time between conceptualisation and entry to front-line service is common of French military vehicles throughout the eighties.

Like the Roland kit, this is a very simple all resin model, consisting of 3 pieces, hull, turret and gun barrel. the hull and turret are well detailed, and there are two positions possible for the gun (dependant on which slot in the turret you locate the barrel in), in the photograph the barrel is in the elevated position. A nice kit, but again with Battlefronts plastic AMX30 offering giving both a MBT and SPG option the competition will be quite strong

I’d contend that the AMX10RC is close to being everyone’s favourite armoured car, initial work on the AMX-10RC began in 1970; production began in 1976, and the first production vehicle was delivered in 1981 to the 2nd Regiment de Hussards. The vehicle features a powerful GIAT 105mm gun mounted in a welded aluminium turret. The turret also serves to house three crew members, while the driver sits in the front of the hull; the COTAC fire control system is provided for gun aiming, the vehicle is a 6×6 drive, and retains its original 105mm gun which is incompatible with NATO rounds (hence it’s HEAT only in game terms). This was the kit I was looking forward to building and it didn’t disappoint. It’s a 9 piece kit with a resin body and resin turret, 6 metal wheels and a metal barrel. The barrel locates easily and snugly into the turret (much better than the AMX30) and the wheels also locate quickly and simply into their slots in the hull. Detailing on the hull, turret and barrel are excellent. The wheels have tread details and a central hub, the wheels are quite chunky, which might not be for everyone, but they make it easy for me to paint, so they work for me.

Last but not least in vehicle terms is the Véhicule de l’avant blindé or VAB, designed to supplement the AMX10P it forms the mainstay of the Compagnie D’Infanterie lists, entering service in 1976, the higher carrying capacity of the VAB gives a somewhat different formation composition than that in the AMX10P lists. The kit consists of 8 pieces, a nicely detailed resin hull, with 4 metal wheels, a metal cupola and machine gun casting and two metal armoured window covers enabling you to model the vehicles with covers up, down or one up one down, (getting the covers to stay open was a lot less fiddly than I expected), and 4 metal wheels, again quite chunky but for me as that aids my painting this wasn’t a problem.

Overall I only had to clear resin flash on about 3 of the vehicles I’ve constructed, and as you can see they take paint nicely. If you’ve read my Free Nations French articles you’ll know that I’ve gone for the plain olive green paint scheme which was in use in the French Army in 1985

After a couple of years of reviewing ArmiesArmy Warsaw Pact infantry, I have to admit the Totentanz infantry did feel a bit alien, in that they are designed in a much more lifelike style than the chunky ArmyArmies style, which if you’ve read my reviews you’ll know I really rate.

Totentanz provided me with the AMX10P platoon pack and an AMX10P HQ pack. The packs gave me enough figures to produce 7 FAMAS rifle stands, a Milan stand, 3 LRAC Stands and 3 Apilas Stands. There is a nice mix of figures, with a standing firing, kneeling firing and advancing FAMAS rifleman, a sniper figure with the FRF1 snipers’ rifle. The HQ pack provides a Milan Launcher and loader, a standing officer figure, kneeling radio man, and two standing LMG gunners. The inability to buy separate MILAN teams is a slight drawback.

As the time of writing I have only got the infantry undercoated, so can’t yet comment on how well they suit my painting style, they needed very little cleaning up in terms of flash, and only a small number required the bottom of the bases cleaning off to enable basing, and as indicated there is a nice range of poses

The Totentanz range is overall really nice, and I’ll admit that I’ve already added considerably to the review products I received, purchasing more infantry and a dozen more of both the VAB and AMX10RC. I’d say the range rates a solid 8 out of 10, it certainly has some standouts, I particularly like the AMX10RC, VAB and Roland. Totentanz have confirmed this week that they are working on a Mephisto model (that’s a VAB with a HOT launcher), and so when that comes out I suspect I’ll be rounding out my force with 8 of those, and 3 more of the VABS and Rolands As I stated at the start, the customer service I’ve had from Totentanz has been great and delivery from Spain has usually occurred within a week. I’m looking forward to getting my painting finished and gaming with them as soon as possible.