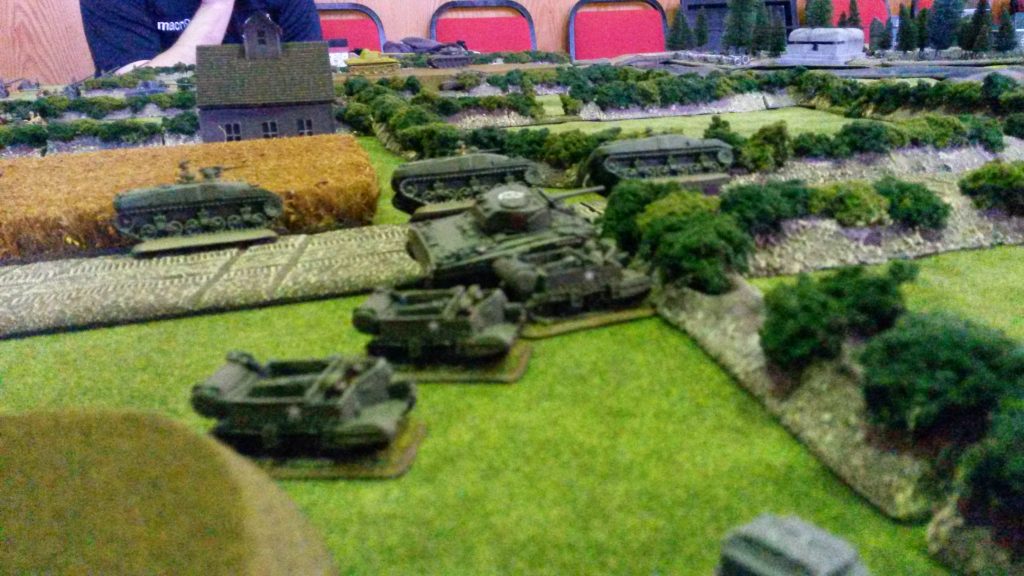 Today we have our first article from new contributor; Mark (another one! – Lee) Alexander Nisbet.  Hailing from north of Hadrian’s Wall, Mark is a volunteer Battlefront Ranger pretty much covering the whole of Scotland.  Mark looks at big games.

Flames of War as we know it, and for the most part love it, is a company sized game pitting two players against each other. Each player usually commands a company of between 1,000 and 2,000pts. This is the most common way of playing the game; the points values and the force organisation charts are geared towards helping player play games this size.

Normandy Battles is an older book in the Flames of War catalogue, full of interesting ideas for fighting set scenarios during the June 1944 landings in Normandy (as the name would suggest). Our focus of interest here though is from page 90 onwards.

At the back of the book you’ll find additional rules for fighting larger battles, allowing for multiple companies and teams of players over the usual one-on-one. From giving bonuses to battalions of tanks and infantry, to examples of mission types, the book is a wonderful source of information

So, why am I rambling on about this old book and the idea of playing large scale games? Well, the reason is that on Saturday (26/11/16), a few friends and myself took advantage of all-day gaming event to try out a 2-on-2 game with 2,000pts a side, giving an almighty 8,000pts on the table at one time. You can see in the picture above that to play such a large game, you’ll be after quite a lot of terrain. Luckily, our club has been very generous in supplying terrain for Flames of War.

On the German side of things we have: Gordon; commanding a Confident Veteran Grenadierkompanie, from Grey Wolf, and David; commanding a Reluctant Veteran Schwere Panzerjägerkompanie, from Bridge at Remagen. The Axis side had the advantage of being the guaranteed defenders and thus built their lists to be a little more ‘sit back’ than normal.
On the Allied side Dermot was giving me some support. He was fielding a US 9th Tank Company, from Bridge at Remagen. Under my own command was a 15th Scottish Division Rifle Company from Nachtjäger.

Forces of War links to all of our lists are attached below.

The most difficult part of the day was getting the table set up for the battle, and took the best part of an hour. But once that was done, we set a few ground rules and started deploying:

The Germans started their underhanded tricks immediately, with two bunkers, trenches and barbed wire being deployed along the mid-line, in an effort to stall the Allied advance. The tactic payed off as my own artillery spent the first few turns laying smoke on the bunkers, rather than engaging meatier targets further back. This delay also bunched up some advancing forces, leading to heavy losses at the hands of the German Artillery.

The picture above shows the initial advances, with a US Tank Destroyer section also waiting just out of shot before the hurried advance between the hedgerows, and subsequent destruction.
The allied reinforcements did nothing to alleviate this problem as roads were backed up with tanks, wreckage and infantry trying to avoid being blown apart by some very accurate German artillery fire.
Eventually, tracks were made, the bunkers dealt with by the Pershing platoon; making use of their thick armour to engage the troublesome emplacements and allowing the thrust to continue.

My ally sadly forgot the majority of his army, so we had to make do with last minute additions, including a Panther serving as a Pershing (shades of the Coldstream Guard’s Cuckoo!  – Lee).
Aside from this issue the game continued, the Allies beginning to make ground as more units made the table.

The Germans started to receive theirs too, in the form of a very impressive 900pts of Königstigers, which then sat back and didn’t move any further, out of fear of my 5.5′ artillery.

As more reserves started to arrive the busier the table got, but even then we didn’t feel it was getting cluttered. There was plenty of space to engage, move and deploy. Especially when the artillery began falling and making some platoons smaller.

Fast forward a few turns and the battle had been met on all fronts, with the Axis players only just noticing in time a little platoon of Universal Carriers sneaking onto an objective in the town. They scrambled an infantry platoon to contest, while at the other end of the table Jagdpanthers and Sherman 76mm tanks traded shots. Unfortunately for the Germans this focus on the Shermans took their attentions away from the Tank Destroyer Section which slipped onto their side, deploying their M10s and taking them out as 3” shells tore through the weaker side armour.
The Königstigers exacted some revenge by knocking out a couple of Shermans, but losing one of their number to a British artillery shell fired at full 88” range.

The day wore on, the players got weary and we decided to call time. The Allies had managed to secure both bridges and the Steelworks Factory objective in town, all the while managing to weather bombardments from 10.5 artillery, Panzerwerfers and 12cm mortars.

In concluding, I’d heartily recommend getting a few friends together, setting up a large table (don’t worry about open areas, lots of fighting was done over vast fields), and having yourselves a Total War.

One final note on the day; The event that allowed us the time and space to run this game was a Memorial Gaming day in remembrance of one of our founder members who sadly passed a few years ago. We raised over £500 for MacMillan Cancer Support. We’re grateful to everyone who donated, and look forward to running another event like this next year.