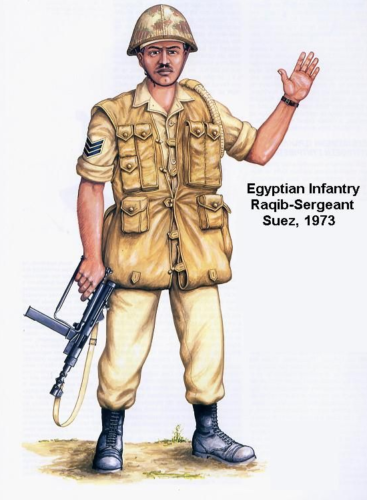 Today, Duncan looks at his Thunderbolt Company for the #FateOfFourGamers Challenge and compares it against the other options available to the Egyptians in Fate of a Nation.

Who are the Thunderbolt Battalions?

Thunderbolt Force or Sa‘ka Forces are the Egyptian military commando force established by Major General Galal Haredi. Founded in the 1950’s the Sa’ka were conceived as a Special Operations, not Special Forces, units and still serve the Egyptian army today. The Sa’ka also differ slightly in their recruitment boasting an experienced, professional core of NCOs and Officers and taking the best conscripts into specialised training facilities.

At the outbreak of hostilities in 1973 there were 38 battalions of these elite troops and they were deployed across all the Egyptian infantry divisions that crossed the Suez as the very tip of the spear in Operation Badr. The opening stages of Operation Badr on the 6th October 1973, were the result of more than 2 years of operational preparation and more than 5 years training with initial goals of crossing the Suez and seizing the Bar-Lev Line of Israeli fortifications.

The information on the Sa’ka Forces deployed is not fully released, even today, but generally it is accepted that the following Sa’ka forces took part in Operation Badr at up to a Brigade level.

Thunderbolt Battalions in Fate of a Nation

Out of all of those options, only the Thunderbolt Battalion and Infantry Battalion are non-mechanised troops which definitely makes them stand out from their peers. So let’s take a look at the pros and cons of each selection in the list:

I’m not convinced that I see a real role for the Infantry – the largest Company is twice the cost of the largest BTR-152 Company and really only gets minefields and wire obstructions so you’re really are setting out your stall early on to maximise that bonus.

The mobile BMP and BTR companies you need to either maximise the Sagger density and invest heavily in that or compromise on cheaper units that will use their transports to get to where they need to go quickly before the footslogging begins.

You may have guessed already that my preference is the rounded Thunderbolt troops. For me, the additional courage means that you will often be able to Follow Me and gain that additional 4” of movement making them essentially as mobile as the mobile units. The ability to include 2 ground mounted Saggers is massive, combined with 6 RPG stands you have some decent man packed AT that will be tough to dig out.

For me the Thunderbolts inhabit a sweet spot in the Egyptian forces. Without the overheads in the cost of transports, they are cost-effective enough to include, like I have in my Fate of Four Gamers list, as a Support choice without breaking the bank whilst bringing the flexibility to either Dig In and defend or Follow Me and support a tank thrust is amazing. Yes, you pay for this flexibility but I don’t feel like it’s over-costed or too great an investment that it compromises the rest of your list.

I also like the Thunderbolt Battalion as a primary, or additional formation, with the inclusion of the BM-21 Hail Battery as a Core Platoon. This means if you take the two compulsory Thunderbolt Company’s as well as the Hails if you are savvy and hid your Battalion HQ and the Hails sufficiently it means your opponent will have to try and kill 35 odd stands of highly motivated, armed to the teeth Sa’ka Troops! Sounds expensive right? Wrong for around 40pts you get a Battalion HQ, 18 x AK47 stands, 12 x RPG-7 stands, 4 x AT-3 Saggers and 3 x BM-21 Hails… Now personally I think that is a bargain and means that you have the points to include another, complimentary, formation to back up these elite warriors.

In game terms, as in the 1973 conflict, Sa’ka troops remain the cutting edge of the Egyptian infantry arm. They were the troops that helped the Egyptians create bridgeheads across the Suez up to five miles deep into Israeli held territory. They are elite, well equipped and flexible enough to do whatever you need them to turn their hand to. They lack the raw hitting power of the full BMP-1 Battalion but they are able to combine effectively with other Egyptian forces to make less obvious and more interesting lists.

Next time I’ll look at painting up your Thunderbolt troops and getting them tabletop ready to take the fight, once again, across the Suez.

Category: A Fate of Four Gamers • Arab-Israeli War • Fate of a Nation • Rambling