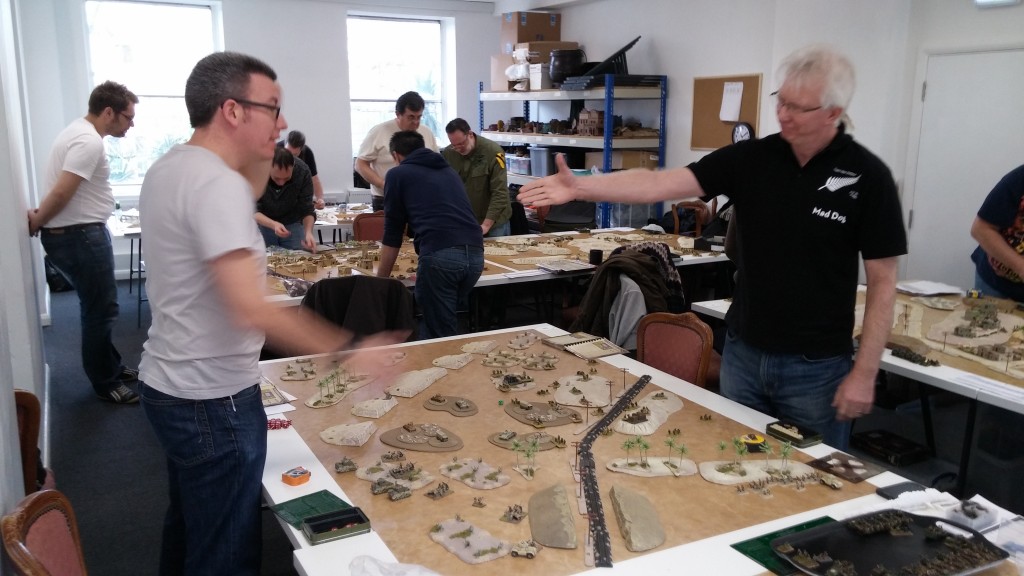 The dust settles and the desert falls silent.

“DAK! DAK! Go!”, the 2016 Brighton Bash, ran over the weekend of January 16/17.  This saw us conduct the first “proper” (6’x4′ dice and rulers) wargame tournament at the Dice Saloon shop and gaming venue, learning a great deal in the process!

Ten tables set up and Mike asked me to strike a pose.  “Parting the red sea” or “deer in the headlights” you decide… [full size courtesy of Mike South]

Friday night saw Nathan, Skip and myself set up ten tables of desert terrain, aided by Axel, Jim and Mat (who came through with a plan that didn’t involve hitting me in front of armed guards and explained *exactly* how to get ten tables in the rear gaming room).  It required a late finish as we had to work around the paying customers but the effort was appreciated and well worth it. Desert settlement – Axel enjoys the perks of being a store owner by ‘supervising’! [full size] Mat and Jim do the important work – marketing! [full size]

Saturday and Sunday saw five games conducted with a random draw bringing ‘Hasty Attack’, ‘Breakthrough’, ‘Free for All’, ‘Pincer’ and ‘Cauldron’ to the table.  Not my first choice in missions, especially not Encounter (to be fair, Nathan had already re-rolled that blot of a mission twice.  Clearly the dice gods wanted it played…)

I’ll get onto results in a moment, but it’s worth taking a step back and reviewing how the tournament went from a Tournament Organiser (TO) perspective.

If you are going to have Raiders, you have to have an airfield with a line of Stuka to shoot up! So, that’s the back patting.  What were the negative points?

That’s lessons learned out the way.  Now the results.

With one exception (Soja just running out of time), every army had at least a basic paint job.  Combined with the terrain it made for some great visuals during the tournament!  I let player’s nominate the best painted and Graham Willmott (with 5 votes) won out here with his US Armoured Rifles.  Skip and his 8th Armoured Heavy Squadron came second with 3 votes and Gav Duck’s late night painting (plus a lend of my recently repainted Grants!) got him 3rd place with 2 votes.

[Hey, you know what would have been great Lee?  If you had taken some photos of the best painted force??]

It was a fairly laid back tournament and most sporting was fairly hotly contested with more than a few players getting one vote.  Duncan Gosling however won over almost all his opponents and got 4 votes.  Graham Willmott and myself came joint second with two votes each. “Good game!”
Dave and Gav get ready to fight it out in the blue

As an Axis vs Allies tournament we have a prize for best Axis General and best Allied General, rather than a single overall best general.  Interestingly, when totalled, the two sides were pretty close: Allies had 490pts vs an Axis total of 515pts.  The axis however had far more variation in the points – the top four axis players were also the top 4 players overall but the bottom four players overall also featured three axis players!  Sadly, I have to count myself in that number.  I won but one game this tournament and came a rather lowly fourth from bottom.  Not my finest moment!

On the allied side, Paul Stovell, with the only raiding force, came first for the allies (fifth overall).  I was surprised to see this but really glad that one of the outlier forces did so well.  Skip came second (6th overall) with his Heavy Armoured Squadron and Graham, both Willmott and Klaka secured joint third with their US Armoured forces.

Terrain packed up and play mats rolled away, its time to think about the next tournament.

Having got on well with the venue, I’m keen to run a few more desert based tournaments to justify their expense on all these desert mats!   Noting that no one from Brighton was heading to Art of War (brownie points being replenished all round) and finding an empty spot in the venue’s calendar we have scheduled a 1650pt North Africa tournament (DAK!DAK!2Go!) for  April 23/24th.  This will be a more straightforward affair with no raiding missions and no restrictions beyond no characters/ list only from North Africa/Tunisia sections of the book.

After that?  Well, the Bunshop guys had a rather interesting idea for an axis vs allied Raiding event.  5 Allied Raiders vs 5 Axis Garrison forces and 5 Axis Raiders vs 5 Allied garrisons.  It’s very intriguing but, given the need to have 4 groups of 5 players I can see it being a logistical nightmare for the poor old TO!

Still, its all a game, right?