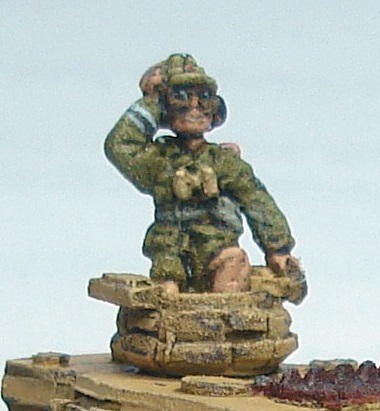 The Making of a Leader

Today Lee looks back on one of his first conversions in 15mm, a DAK tank commander sitting out his cupola.

One of the things to come out of the recent Flames of Fez was dusting off the armoured component of my Deutschland Afrika Korps (DAK) force.  The force was starting to show its age with a  couple of tanks missing barrels and the metal components suffering from chips but the tank commander on his PzIVF2 was still sitting proud.

The DAK my second force, after my Eighth Army brits, so benefited from me being more confident with painting and modelling 15mm, manifesting in my first attempt to convert a unique tank commander for the CO tank.

What I was surprised to find, whilst trying to locate some photos of the CO in his prime, was a set of progress shots that I apparently took.  To the best of my memory I never did anything with these on my old blog so it seemed as good as time as any to post them!

I wanted my CO to be sitting high out his cupola, holding on as the tank races across the desert whilst he maintains a watchful eye on the horizon.  not a pose you would adopt when in shooting range but a little bit of Prussian arrogance seemed acceptable here!

Some of the best DAK figures Battlefront created were the dismounted tank crew figures. You used to get one or two of these per tank, along with the commanders and they were great for creating “bailed” tank markers. However, the DAK ones were legitimately good figures in their own right, sporting shorts, field caps, goggles and rolled up sleeves.

The two figures with SMG used to appear on my “rear area” command bases as often as not! Their absence is greatly noted and, if BF reading, it would be good to see come back as a special order item!

Of use to me for this conversion was this figure:

Dressed in the fantastically odd but surprisingly typical combo of jacket and shorts, stooped over and holding onto his cap as he runs from his brewing up tank, the pose was perfect for the basis of a commander sitting on his cupola, one hand holding his cap on as his tank cruises through the sand.

From there, all I needed to do was remove his lower legs and left arm. The legs would disappear into the tank whilst the left arm needed to be doing something more useful such as holding onto the cupola for dear life! A set of side slippers made short work of the offending limbs.

Now we start getting into the serious work of sculpting! Firstly, sculpting with green stuff can be seen intimidating but 15mm is a fairly forgiving scale to work in. We don’t need to do a lot of the things we would in 28mm such as build up musculature and so on.

I’ll be the first to admit my sculpting is amateurish at best, but it’s certainly good enough to get by at this scale. All I can say is, give it a shot. You will be pleasantly surprised what you can achieve.

Creating a whole new limb, the first thing I needed was an armature to work off. This creates my basic skeleton to work the green stuff on and helps ensure the proportions of the limb are not too outlandish. I used some thin wire (sub 1mm in diameter) from surplus sandwich ties as this was a good compromised between ease of bending to pose, and stiffness to retain its shape.

A pin vice was used to drill a hole in the model and super glue fixed the straight wire in place. Once the glue was dry, I used a set of pliers to bend it at the shoulder and elbow joins, trying to match the limb lengths of the existing arm.

Once I was happy with the position of the arm’s skeleton, I could put on the first layer of green stuff.

For those who have never used green stuff before, it’s a two-part polymer consisting of the resin and a hardener that comes either in two separate tubes or as a combined strip with the two bits separate except at the join. You cut equal lengths off, knead it together till the blue and yellow parts merge into a green.

Two tips; firstly, always cut off half of what you think you need, you’ll be surprised how far a little goes and you can always mix more.

Once I had a decent “sausage” of green stuff on the armature, I smoothed it onto the shoulder join and then left it for thirty minutes or so to partially cure.  This makes it more workable whilst letting it stiffen up to hold detail.

After thirty minutes, I used a sculpting tool to add the main form of detail, creases. The creases should radiate from the inside of of the arm.  A tip a sculptor friend of mine told me was that the creases should “point to the action”. Checking photos of uniformed troops in similar poses is also a good idea.  I also used the edge of the tool to indent the belt lines back into the back.

I let that cure overnight, so its details would be fixed, then the next day added the hand.  This started as a ball of green stuff that I pressed down into a disc, used my sculpting tool to tease out a thumb from one part of the disc and let it cure for thirty minutes.  I then tidied up the outline of the hand and used a knife to cut in the fingers.

I was quite happy with the look of the figure but I figured he needed some extra detail to really make him look like a tank commander.  Goggles, a headset and binoculars seemed appropriate.  The goggle was created by starting with a couple discs of green stuff over the eyes, pressed into the shape and then slightly indented in the centre of the lenses to give the impression of the frame.

The binoculars started as a sausage of green stuff, cut into two cylinders which were then positioned and a small joining piece added to bridge the two bits.

The headset was two balls positioned over the ears, joined by a thin sausage to form the headband.  last sausage acted as the lead trailing into the tank.

And that was it really!  From there I painted the figure in the same manner as the rest of my DAK force.

I planned to ditch a lot of my DAK armour (made up of a mix of manufacturers, some long since out of business!) and I wanted to transplant the officer to a new mount.  He clearly agreed as he fell off his turret the moment his tank was brewed up in the first game of the tournament!  Hopefully, we’ll see him again soon in a future article!