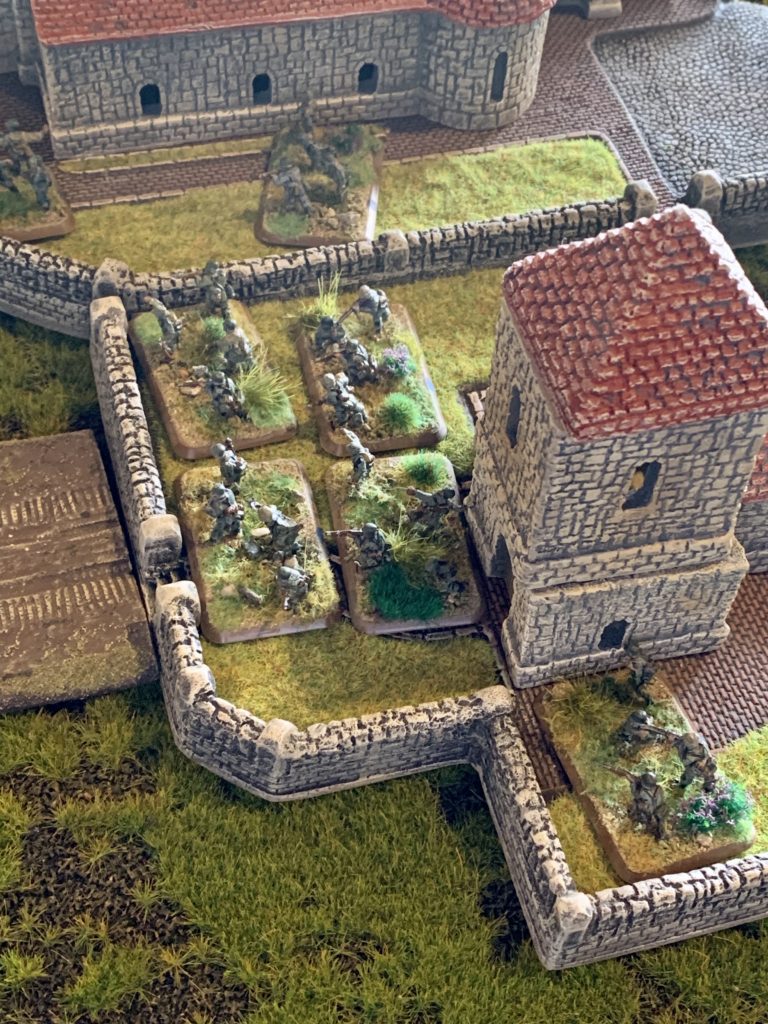 
“In a daring and energetically led attack along the west flank of the army, the division [Das Reich] has destroyed a considerable enemy force, and thus created the necessary condition for further operations. I convey to the division and its officers my special recognition. Mention of the division in the Wehrmacht communique has been proposed.”

With the details of the SS book revealed I decided it was time to give them a runout.  As I have enjoyed fielding their Heer Tiger cousins I thought I would try the new SS Tiger formation complete with SS support.  My opponent Paul opted for his new Cromwell formation.

We both chose to attack and using the Breakthrough Assault Expanded Mission Matrix rolled up encounter.  As the Tiger commander, I looked at delayed reserves and immediately went ouch!

I left 3 x Tigers and the AA in reserve, with Paul leaving a large Cromwell Pltn, HQ, Typhoons and Stuarts off the table.  I immediately regretted my choice of not putting my Panzers on the ridge-line in my deployment, I had delusions of being offensive and then remembered they were aggressive so hit on 3s!  Sitting on the ridgeline would have overwatched my objective nicely.  I also deployed 2 x Tigers in a dangerous but advantageous position on the back slope of a ridge knowing he would only get 1 shot with a Firefly at long range.

Paul got first turn and advanced his Achilles on the right flank.  2 failed cross-checks so only 2 moved up the hedge.  He also hit a Wespe (wouldn’t have happened as Heer!).  His small Cromwell platoon advanced on my left flank and he took a shot with his Firefly, luckily missing.

In return, my Tigers destroyed the Firefly and managed to Shoot and Scoot off the hill.  The Wespes backed off the hill while the recce advance into the farm complex.  The PanzerIVs stayed put not wanting to move in-front of so many guns.  Infantry moved up into the church to hold a centre area.

His 2 x Cromwells on my left flank did a 28-inch dash (!) to the far side of the ridgeline.  Moving that inf was a fatal mistake as it meant he didn’t come into 8 inches of a team so could make it.  I had not expected such a bold and risky move.  The Achilles continued to reposition.

My Tigers blitzed onto the hill and the infantry moved back towards the Cromwells failing their fearless follow me meaning no assault could be made.  The Tigers bailed a single Cromwell.  However, the Wespes did manage a blitz and blew up a Cromwell in the centre which was rather lucky.

With the Cromwell remounted he moved these 2 bold tanks to assault my infantry from behind (no sniggering please).  Also, he got reserves and they came on right by my Tigers.  His Achilles moved forward and took a couple of shots at the recce in the farm bailing 2.  His Firefly penetrated a Tiger but only bailed it.  Frustratingly his Cromwells killed an infantry stand and I rolled a 2 to counter and fell back (Fearless my @%$#).  If I cant unpin this will be a short game.

And I didn’t unpin! Desperate measures now.  The PanzersIVs braved a 4+ Blitz and passed, getting 4 long-range shots in the open bailing 1 Cromwell.

The Wespes moved and fired but seemed to be shooting another barn door somewhere.  The Tigers nailed a Cromwell and bailed another before scooting into cover.  The PanzerIVS also claimed an Achilles meaning they were now actually in poor spirits due to their stung out nature.

My only chance was for the Cromwell platoon to fail to remount and then fail a 5+ last stand.  Ever defiant a 6 was rolled and it was 8-1 to the British.

Well on the downside the SS lost.  Looking positively at least the SS lost!

A tough matchup and hard to get definitive data but as a seasoned V4 Tiger player a few thoughts.

Of course, should of and could have is the joy of FOW, there is always something different to try.  Fundamentally if my SS inf has passed just 1 of its Fearless moral tests the game probably would have been very different.

Let us know how you get on and thoughts on SS lists.