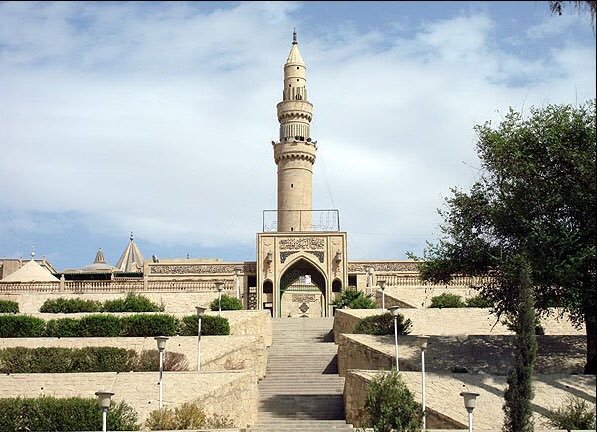 When people think of the Middle East, most think of rolling sand dunes like the African Sahara Desert, punctuated by the odd oasis here and there or the small nomad settlement or camps. While this does work for portions of the region, the terrain and infrastructure in the Middle East is quite varied and presents a golden opportunity for players to build a thematic and accurate table to fight their Oil War/Team Yankee-In-The-Middle-East battles on. In this article, I will explore the different types of terrain I encountered in my sojourns to Iraq and how they can be represented on the tabletop, with pictures of the real thing to give players ideas on what fighting in Iraq, Iran, or Lebanon could look like.

Finally, in the neighbourhoods and just about anywhere you can toss a stone you have the Mosques. Arab culture revolves around Islam, and no neighbourhood (or Oil War city table) is complete without one. Mosques can be small and simple, or massive cultural landmarks. Regardless, mosques always feature prominently from their surroundings and should be a centrepiece on your table

As with any desert civilization, life revolves around the availability of water. In Egypt, you have the Nile, and in Iraq, you have the Tigris and Euphrates Rivers. While Iraq is a wholly desert country, the areas around the two rivers is lush and believe it or not, green. Typical around these areas are palm trees, tall reeds and grasses, and if irrigation is around then orchards. Now, when I say tall grass I mean TALL. You can easily hide in it just by squatting down. In central Iraq around Balad and Samarra, a lot of irrigation goes on, with canals and levees criss crossing the area. Think of it as almost akin to Vietnam rice paddies. Naturally, a lot of these sorts of areas are near to towns and cities, so it would make for a good table to blend the two together

As we all know, largely populated areas a lot of times have poor districts or slums. This is true in the Middle East as well. In these areas, houses are literal mud huts or a hovel made out of tin and sheet metal. The neighbourhoods are densely packed, with not much room to get a car let alone a tank or armoured vehicle around. For me, I would make it impassable to tracked vehicles (due to the narrowness and also these places had a penchant for ruptured sewer mains to get stuck in) and cross checks for wheeled. Of course, most cities with wars being fought in them wind up as ruins.

So while desert fighting is wholly appropriate for Oil War, the diversity of terrain that exists in the middle east can make for a diverse and challenging table to fight your battles on. From fighting in the river deltas to desperate combat in the slums and ruins, the possibilities are there. Until then, happy gaming!