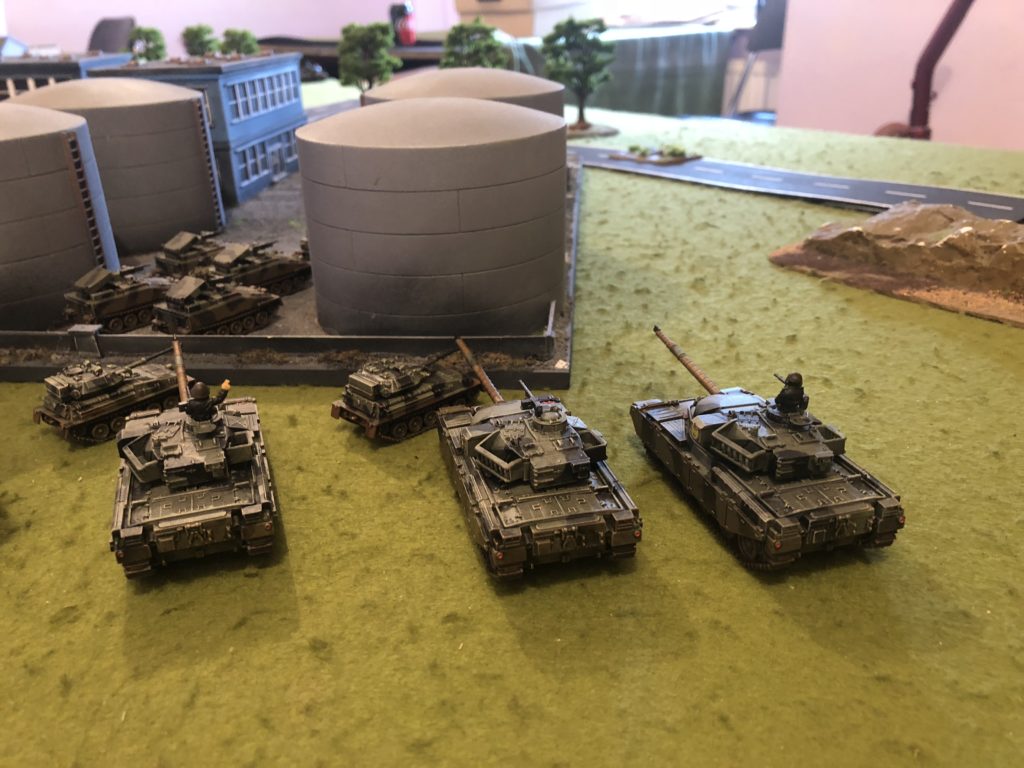 With the fun of the first Mobile Offensive game, I was keen to have another go.  With my opponent being NATO, I switched to my East Germans.

My Volksarmee are normally based around a BTR-60 / Spigot infantry formation and a T55 formation.  I don’t currently have any T72s so that wasn’t an option here!

With the success of my Harriers in my US game, I decided to give the Hinds a try.  I have a bit of a love / hate relationship with the Hind; it SHOULD perform exceptionally but usually lets me down.  They’ve been grounded in favour of SU25s normally, but I thought in this environment they may shine…

So my force was as follows: James had gone with Chieftains, a tank that he really doesn’t get on with in game! We were already commenting re: the large disparity in numbers.

James made rolls for attacker / defender and ended up as Defender on the Gauntlet mission. We chose sides and set up. James used his Recce to push up to middle of the board.  As we were on a 6 x 4, this meant I had quite a long run up the field to get to him.  Luckily, there was plenty of tall terrain to hide my advance. Although I could have lined up a shot with my Spandrels, previous experience was that this was a futile gesture trying for 6s and so I moved them instead.  Everything else pushed up whilst remaining hidden from the Brits.  If they wanted kills, they’d have to substantially re-position to get them. On his left, James moved two Chieftains into the woods for concealment and shot on my BTRs.  One bogged, and the other could not land a shot. On his right, James moved into tactical range of the objective and fired downrange again, still not finding metal. In the centre, James withdrew his AA from the car park sensing the threat from the T55s and Shilkas behind the wood. On the left, I saw an opportunity for open shots on the Blowpipes and went for it.  3 T55s rounded the wood, ignoring their bogged Shilka comrades, and my Hinds swept in behind the Chieftains.  The T55s opened up, destroying a blowpipe and bailing another.  The Hinds took four hits from the Blowpipes but saved three and the last missile failed the firepower roll.  Weathering limited AA MG fire also, they fired on the Chieftains, destroying one and bailing the other.   The bailed Chieftain’s crew decided discretion trumped valour in this instance, and fled the field. On my right, my T55s moved up to the wood, staying out of sight of the Chieftains there.  In the middle, my troops dismounted and entered the first office block and the BTRs pushed up the road. James had limited options but need to start destroying tanks.

His HQ picked up the challenge, taking out two T55s.  The survivor kept at it. On the left, a blitz but a bog meant another two kills but again the surviving crew held their nerve. It was time to get on the objective, which the remaining T55 and Shilka unit made it backed up by BTRs.  My infantry advanced into the Oil Refinery office block.

The Hinds repositioned to take out the Chieftain HQ, but met with much sterner resistance from the Blowpipes.  Losing two of their number, they were still able to destroy the Chieftain.  When it came to morale checks though, the two remaining teams were more than 8″ apart and so were testing!  I finally failed a morale test and they fled the field. My Shilkas and BTRs were only able to bail a single Scimitar. With a T55 and Shilkas on the Objective and no Brits in range to contest, James had to clear them the old fashioned way – Firepower!

He Blitzed his remaining chieftains to the back of the table, getting one of them into a line of sight of the T55.  With a single shot, the T55 was unceremoniously scrapped. The Scimitars moved up to engage the Shilkas.  Managing to bail two, and with the fourth out of range, it would come down to a morale check… With the objective held and uncontested, the game was over.  Victory to the East Germans.

As soon as we compared forces we both agreed this would be an uphill struggle for the Brits; the Blowpipes weren’t a surefire match for the Hinds, and the chieftains were going to struggle due to their weaknesses compared to the other 2 main NATO tanks, the Abrams and the Leopard 2.

So what are these weaknesses?

With these in mind, fielding the Chieftains at 40pts was always going to be really difficult as there aren’t the points for the support they really need.

The game was an interesting exercise, but certainly not the nail-biter that my last game was though.  For my next 40pter with the East Germans, I’m dropping the Infantry and shoehorning in some T72Ms or a T64 allied formation.  Of course I’m keeping the T55s!