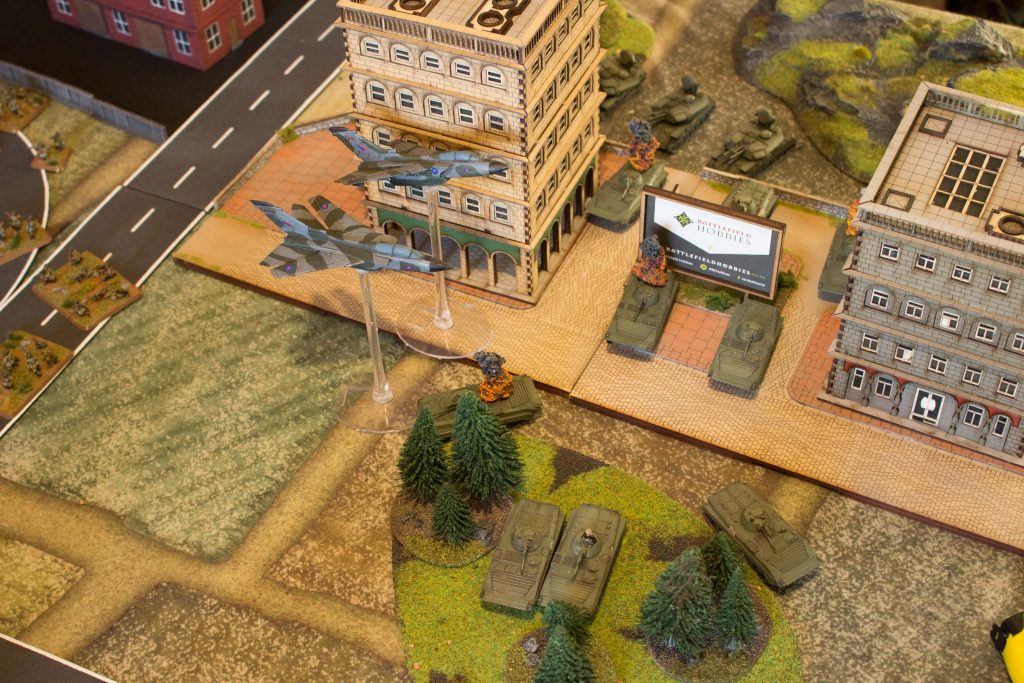 Today we have a quick photo based Batrep from Mark with his new British Army for Team Yankee.

I have been waiting to play with my new British for a while.  I love the look of the BAOR and the lists create some fantastic choices.  While I  am still a bit limited on selection I cobbled together a 100pt force for an outing vs the Soviet hordes.  The drawn mission was the Brits attacking in Breakthrough.

The Brits were packing

Here is what happened…. The Brit armour weary of the ambush and T72s that could come on from reserve and threaten their flanks set up ready to engage the Inf and react to future reserves.  A few Soviet inf stands are claimed by the brutal guns.

The rest of the armour also sets up to engage the inf.  The BMPs hang back weary of the main guns FP. The RAF arrives to hit the BMPs losing 2 to the Shilkas fire despite 5s to hit!  A few BMPs are knocked out. On turn 3 the T72s arrive from reserve moving 14″s and taking the plus 1 to hit in order to hit the rear armour.  2 T72s also manage to get through the forest to target the side armour as well!  The ambush is also sprung to add as much fire power as possible.  A whole Pltn is knocked out! The surviving BMPs also seize the imitative and rush the other pltn to prep for a flank attack!  Banzai!! The Brits try to get revenge striking the Pltn in the crop field and shooting and scooting to protect their rear. Unfortunately the RAFs bombs fall wide. Some brave BMPs make it into the flank but literally cant hit a barn door! The flanking T72s continue to wreck the Brits and BMPs engage the Scorpions. The Chieftains thin out the BMP with only one more remaining, a single T72s is also claimed by the IC. British reserves finally arrive ready to storm the Obj.  The Carls claim 2 Shilkas, gosh they are amazing!  The Milans having blitzed claim a T72 as well. Despite the T72s doing well the Obj is looking weak. The hinds make an appearance and open fire with their cannons on the inf to little effect.  However the Shilkas claim multiple casualties. The T72s claim a tank and the plucky lone BMP gets another forcing a failed morale check!  The inf and the CiC is all thats left for real fighting power. The RAF come to the rescue claiming 3 kills but not enough for a check. The inf polish of the Shilkas and the CiC.  With the Hinds out of range of the Rapiers they continue to hammer them. It all comes down to the final assault. Despite pinning the inf with the transports the Brits get bounced in assault and the CiC dies to an RPG7.  With that the infantry fail their check and the day is lost.

What a fantastic game!  The ambush and reserves started a cascade effect on the Brit tanks as they got into their rear.  As always the Soviet inf has impressive staying power, continuing to show that they are one of the best units in the game.  Time to paint a second pltn!