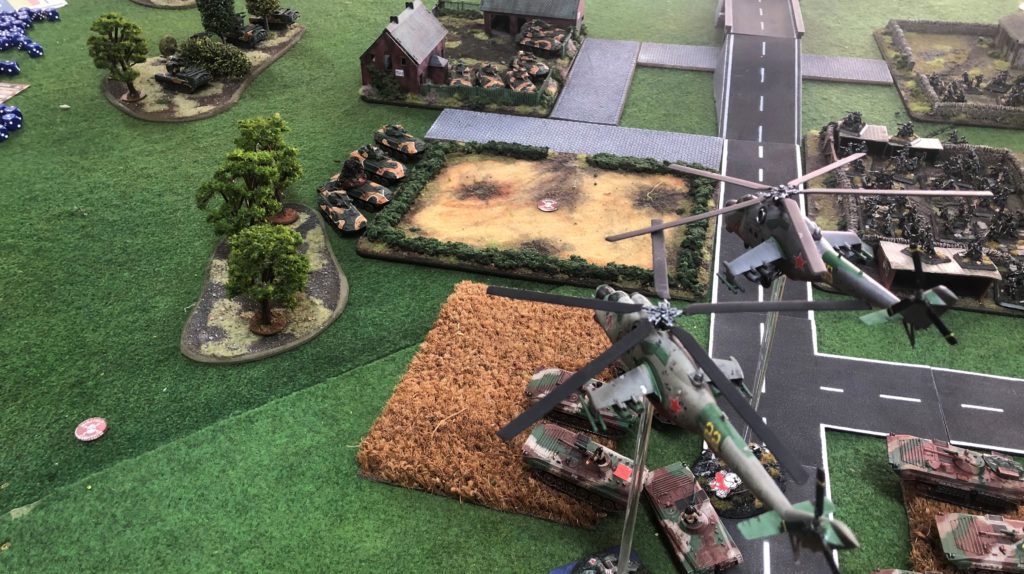 With Team Yankee V2 on the horizon and plenty of new armies around in form of the Oil War book, it was time to dust off the US and finally use some of my new models!

The battle took place on an 8 x 6 foot board (the only way to play Team Yankee over 60pts in my opinion) and was using the latest More Missions supplement.

The throwdown was vs my long term nemesis Big Paul and his Soviet hordes.  He normally goes quite tank and Hind heavy so I was sure not to skimp on AA and fielded my Chapparels for the first time.  My fave unit, the Abram IPM1s, were of course the centre of my force as part of a busy Armored Cavalry Troop formation that also included AH-1 Cobras and a Rifle Platoon.

My other new addition was a Marine LAV Company with two units of LAV-25s.  I was hoping these would give me the firepower to take down BMPs without having to waste TOW shots.   The Spearhead function was an added bonus, and certainly something I wasn’t short of now!

Rounding things out I have a Mech Formation for objective securing and general support.

Unfortunately, due to a blackout on enemy propaganda, the Russian forces were only captured on camera once they took the field.

Paul’s forces were concentrated around a pair of max size BMP2 companies supported by six Hinds and a small company of five T72s.

I’d put down a comprehensive attacking army so plumped for Manoeuvre and Paul decided to defend.  With a roll, we ended up with No Retreat.

Due to a misreading of the second page, I ended up only deploying half my army on the first turn; we amended the mission slightly – I placed the rest of my forces in my deployment zone in my 2nd turn and Paul move his reinforcement rolls back by a turn. (Doh!)

My first move is to soften up the BMP2s on the nearest objective.  I bail most of the unit but only killed one.  They pass their morale check.

I also try and strip down the BMP2 hill.  My Rifle Platoon pushes forward with supporting fire from ITVs.

The results aren’t spectacular but 3 BMPs are down.

Paul’s Hinds swoop in to engage my LAVs, but the Chapparels are waiting.  As I’ve put them on the edge of the woods they are hitting on 3s and the Hinds lost four of their number before firing and destroying only one LAV.

On BMP hill, the BMP2s are able to take down some of my Rifle Platoon but also suffer themselves when they attempt to assault.

The rest of my forces join the fray and mainly push up towards the nearest objective, supported by my Cobras.   I pour fire into the BMPs, killing and bailing several.

My lone ITV deals with another BMP…

…And a Mech Platoon backs up my beleaguered Rifle Platoon.

The Soviets manage to reinforce with their T72s, that push up the road towards my main forces.  The remaining BMP2s push around to hold the objective, supported by their infantry company that high tail it across from the farm yard.

The BMPs of BMP hill move to counter my Mech Infantry M113s, destroying two of them and forcing the troops out, and finally hit and destroy my ITV on the bridge.

I hold back on pushing on the objective whilst I deal with the incoming T72s.  My Cobras take up the challenge.

Two T72s destroyed and one bailed; the Cobras are happy.

I pour more fire into the objective…

Whilst my Mech Platoon near BMP Hill deploys and returns fire on the BMP there.

Unfortunately allied cameras are down during the soviet counter advance.  Paul moves up his Gophers and takes down two of my Cobras, but has little effect elsewhere.

My IPM1s begin the navigate the woods around the minefield; the third one bogs.

Between their fire and the Cobras, the T72s are reduced to a single team which then runs.  My LAVs work on the infantry and gophers.

Elsewhere, BMP hill is going to need renaming as my Mech Platoon finish them off.

The Soviets reinforce with a BMP2 Recon unit, which blitzes on and fires on the IPM1s.  The hits are thrown aside by the tank’s superior armour.

The beleaguered infantry attempt to inflict some damage on the approaching US, but also fall short.

With my LAVs removing the remaining Gophers, my Cobras go in point blank with Gatling guns on the BMP recon unit, destroying one and bailing the other.

A 3rd Abrams crosses the woods and so I believe I have what is needed to clear the objective; I push in on the Infantry.

A successful assault kills several teams and drives off the remainder, and my Abrams are ready to fully clear the objective next turn.

Paul gains further reinforcements in the form of a unit of Shilkas, that rapidly deal with my remaining Cobras.

On the objective, the rest of the Infantry attempt to envelop and take out the IPM1s, but their armour stands strong.

Concentrating all the firepower around the objective, I kill many of the Infantry with shooting and then move in to assault with the IPM1s.  The few remaining infantry are force back, and the objective is taken.

It’s been a while since we played but it was great to get back into it.

Paul had an entire Infantry company sat on the rear objective that took no part in the battle; this, along with my close starting deployment to the near objective and the small defence force made it easier to push hard on that point.

The IPM1s and Cobras performed exceptionally well, and the LAVs laid down a constant barrage of fire on the BMPs and Infantry.  It was a really fun force to throw around.

We’re going to be playing the V2 rules from now on (using Fate of a Nation) so this is my last V1 game I think!  Went out on a win as well 🙂