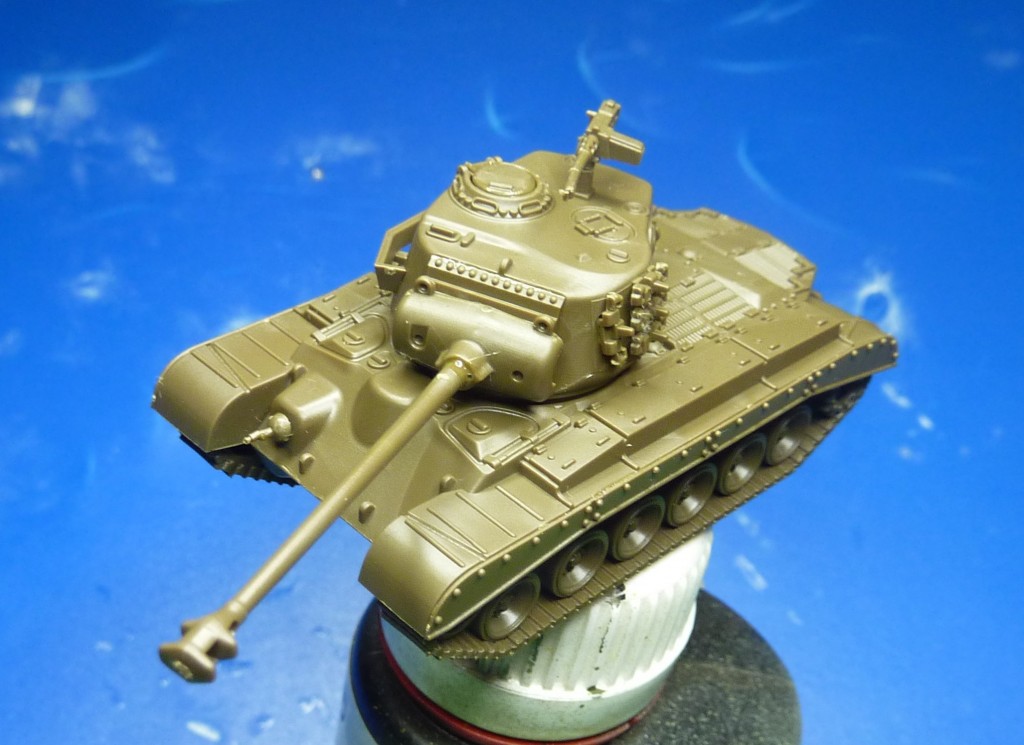 This week, Lee looks at the M26 Pershing expansion for the Gale Force 9 “Tanks” game.

When “Tanks” first got announced I’ll admit to some head scratching on whether the game would appeal to me.  X-Wing with Tanks?  Bah!  Sounds like something for the kids to…GET OFF MY LAWN!  At the very least, the tank expansions may at least offer a Flames of War player a (slightly inefficient, cost wise) way of buying a single model to deal with the relative inflexibility of the 5 tank per box model BF have.

But those from the Brighton Warlords who got to play the game at Salute came back with generally positive words about it; characterising it as the game we play to round out an evening playing Flames, as well as bringing new blood into Flames.  The price point was also very attractive and the final tipping point was the review on this very website where it was confirmed that the “Tanks” game came with all the cards in the box so you could use your existing models to play.  Sold!

So I popped down to the local game store to grab the basic box AND THAT IS ALL I INTENDED TO BUY.  Of course, the Dice Saloon chaps had helpfully stacked all the expansions next to the main game and of course I went “Panther, eh.  Got 9 of them.  Stug?  Got 12 of them.  Pershing.  Pershing? Hmm… I don’t have one of those…crap.”

So, time for the M26 Pershing review! The expansion sets take the form of an over sized plastic blister, re-using the box-art of the Flames of War plastic kit to good effect – putting the Pershing centre stage.  The back is clear and so one can see the sprue and plastic bag containing the cards inside – allowing for an ever useful check of contents before purchasing!  The box contains cards for the T/M26 Pershing and T26E1 “Super Pershing” with its 77 calibre 90mm gun, plus one unique crew card (a new gunner), plus repeats of four cards from the main box (high velocity ammo, repair kit etc – you forgot to actually write down what the cards were before you put them with the cards from the core set, didn’t you?  No.  Shut up.).  The final component of this ensemble is the two sprues that form the tank kit – coloured a suitable “olive drab” in line with the Shermans in the core set.

One of my concerns with “Tanks” was the nature of the models.  Now, don’t get me wrong; I love a multi-part plastic tank kit (I used to be able to say that far more convincingly before the 18th T-72…) and I characterise myself as a painter first and foremost.  But one of the attractions for many with the likes of X-Wing is that the models are pre-painted.  I can grab my G-Wing, or whatever the latest EU monstrosity is, crack open the plastic and have it on the table to be ripped apart by a “U-Boats” or “Fat Han” (or other humorous meta list name) in no time.  Will a multi-part plastic kit have that same attraction?  Its hard to tell, but certainly GF9 seem to think so.

Given I had never assembled an M26 before, I decided to time myself whilst I built the kit to give an idea of construction time.  Whilst I’m an experienced builder, I did this whilst semi-distracted by the post-Canadian GP show and after a couple beers so it somewhat helps reduce my skill level down! Instructions are a step up from the old black and white cracker sketches of old!

The back of the cover art has some instructions on how to assemble the model in three major steps; noting the differences between the two models.  At this point someone fresh from building the Shermans in the core set will be surprised to find that you *can’t* build both turrets this time.  Best make the right choice!  I went for the stock Pershing.

The lower hull went together with the minimum of fuss, excepting one, literal, small thing – the bow MG.  Despite carefully trying to cut it clear with a fresh balded knife, the damn thing snapped halfway along the barrel.  Cue some cursing and hunting for the tweezers.  Certainly not a strong sell for a newbie.

After that, the turret went together fairly well although, again, one of the 0.5″ snapped whilst trying to cut it off.  The second one, because thankfully there is a spare, fared a little better but still badly kinked.

Total time to build, 17 minutes.  Not too bad, but there are some features that don’t lend themselves well to a younger builder and the lack of a true dual turret will no doubt frustrate some. With little chance to actually try the game yet, its hard to tell.  The game definitely sells the Pershing as being the US equal to the Panther, trading one less initiative for one extra damage capacity, as well as the US ‘Gung-ho’ rule (count as moving slower for working out the defender’s shooting) for the German ‘Blitzkrieg’ rule (extra move in the repair step).  The Pershing gives a good balance of mobility, hitting power and staying power to a US team although it consumes a little shy of a third of a platoon’s points in doing so.

By comparison the Super Pershing is a bullet soak; upping damage capacity to 8, granting an extra defence dice and attack dice over the Pershing, but losing Initiative.  It seems to lend itself as both a “tank” for a platoon or a dedicated sniper, sitting back static and using its latent damage resistance to make up for not having movement contribute defence dice.  It does, however, wipe out the best part of half a platoon’s cost for the privilege!

In isolation, the Pershing continues the generally positive trend of the Battlefront plastics, albeit with some niggling issues in how the machine guns are attached to the sprue.  Ignoring tanks, its a slightly expensive way of buying a single tank (£7 for one versus £20 for three – i.e. £6.66 for one) but may be useful if one wanted to just add a single tank to an existing force.

In the context of “Tanks” its a relatively simple plastic kit that may frustrate some with broken MG and the realisation that they built the wrong variant, but otherwise goes together relatively quickly and adds a decent heavy hitter to a US force that needs something to rival a Panther.

Time will tell how the complexity of the kits, optimised for Flames of War, plays out with Tanks.  But I don’t think the Pershing will hurt or help the case.

So there you go, our first Tanks expansion review.  Feedback on the format is always appreciated!