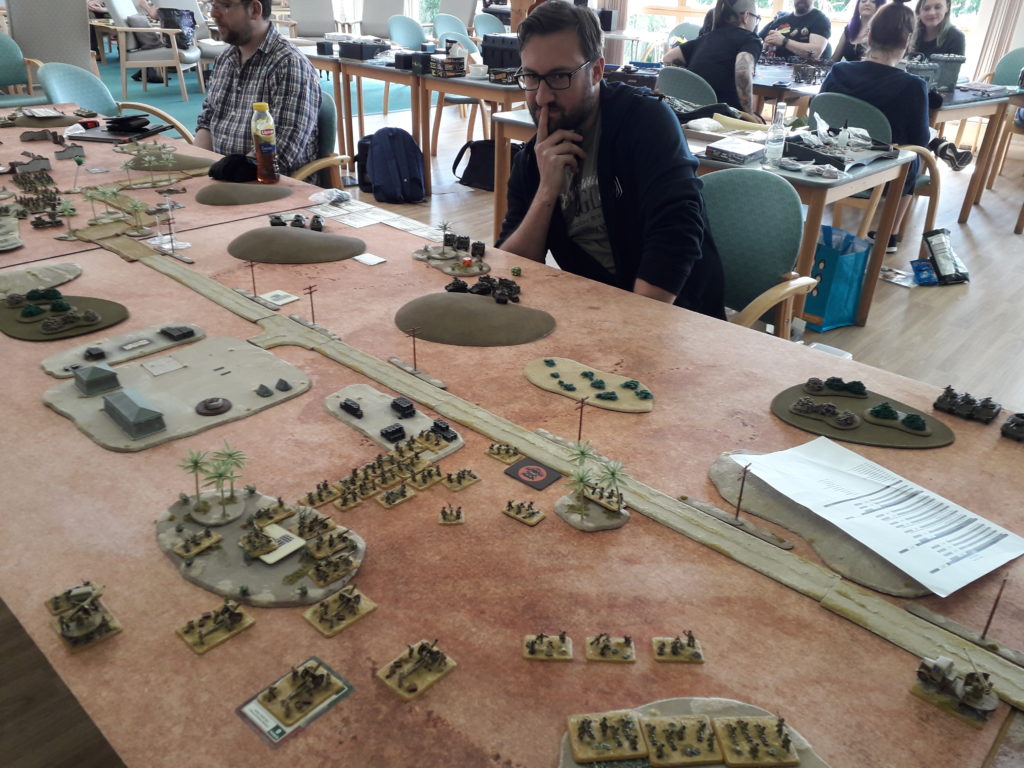 Martin, after realising it wasn’t a day out to the seaside, took his Avanti Italians to Guildford to participate in the latest gaming extravaganza organised by Breakthrough Assaults own Eddie ‘Fez’ Turner.

Normally we’d start an After Action Report (AAR) with a section on the list build used for the tournament but, like all Flames of Fez events, this one again featured the option to participate using the Iron Fez rules.  This option saw players play three games with three different lists, selected at random for each each game, all have to be from the same nation.
Having written about the flexibility of the Italian model collection I built up a while back (A Hat Full of Feathers), this seemed the ideal opportunity to try out all three infantry formations, these were backed up by a tank company and a variable cast of support units.

Dylan had brought a Sherman Tank company with HQ, two platoons of four M4 Shermans, all supported by an armoured rifle platoon and a M7 Priest battery.
I drew my Weapons Company based list and so elected to defend.

The scenario rolled was “No Retreat” so my armour went straight into reserve and I put a weapons company platoon into ambush, setting up my remaining brave Besagliari to hold the ruined compound surrounding the objectives from the inevitable Sherman rush.  These were backed up by my Lancia’s and some captured 25pdr artillery pieces towards the rear. Playing long ways really helped me out as I could reduce the attack routes by placing my minefields across the more open side of the table.

Dylan inevitably launched his tankers and armoured rifles forward blazing away as they came but doing no damage to my well hidden troops. In return, my artillery and 90mm AT guns reaped a terrible toll, killing half the armoured rifles and Shermans by the end of turn 2. Turn 3 saw the remaining Sherman assault the forward weapons company which proved as poor as their shooting but a failed counter assault saw me have to fall back towards my second defensive line. Turn 3 settled the game with my ambushing unit securing the forward objective occupying the buildings and two of my tank units arriving to flank the Shermans.  Even with only AT6, weight of fire proved decisive and the Shermans broke, ending the game.

Now my opponent probably thought I would go for the Night Attack, but with only two Engineer units able to move about freely I elected not to take this option and instead chose to give my Lancias the chance to try and pick off the Churchill platoon in turn 1.

The British were deployed in a walled compound with the AT guns flanking the infantry position, but only one infantry platoon was sitting close to the objectives which would force the others to move forward out into more open ground if I could push these back.

I started the game with my Engineers clearing the British minefields blocking my path to the more open objective and pushing my light armour forward to occupy the British AT gun line.  This was going to be a game of attrition so I didn’t overly worry about any losses to these units, plus as long as they didn’t shoot hitting them would be difficult. My mortars and Semovente unit barraged the gun position pinning them down and killing a 17/25pdr. As hoped, the Lancias disposed of the Churchills. My 14/41’s dashed forward to limit any ambush deployment options against the area of my main thrust.

The British guns failed to rally and remained pinned down for the next couple of turns, suffering further losses to my artillery fire and the steady removal of platoons continually weakened their position until, finally, I overran the position capturing my target objective.

The only losses suffered at the end of the game were a unit of M14/41’s which were sacrificed to the 6pdr ambush which they forced to deploy too far away from the objective for them to help the stranded rifle platoon. All hail Il Duce victory again winning 7-2!

Game 3 saw me play the Fez man himself in a highly humorous game of Dust Up.  His list comprised an M10 tank hunter force of HQ Stuarts, two platoons of three M10, three Sherman and a Recce Platoon supported by Kittyhawks, plus a Priest battery with OP. Lots of high end AT but not so useful versus my final force, my Rifle Company and rather light weight tankers, but could spell trouble for my Lancias.
Luckily for me Fez got the first turn so no planes and no bombardments.

The game was pretty cagey for the first few turns until reserves arrived.
Eddie killed my short rifle platoon who I sent to try and grab the objective whilst I managed to kill an M10 and a jeep.

With my reserves about to arrive, Eddie, now with his Shermans on the tabletop, decided it was time to go on the offensive with his aircraft turning up and killing a lancia whilst his Recce managed to trap and kill the other. The Shermans launched an assault against my infantry and, through sheer incompetence, one failed a cross check failing to assault at all and the other two completely missed me! My counter assault bailed one tank, the remaining tanks breaking off with one again failing its cross check and getting captured.  Rather amazingly, Fez had managed to lose an entire tank platoon essentially to a stand of riflemen standing under a palm tree.

Now my reserves arrived on mass and rushed toward the objective, the Semoventes managed to kill a second M10 which then failed their platoon motivation check and retired from the field of battle.

With his units running out, Fez pressed the assault, rolling forward his Priests to use their 0.5cals along with his remaining M10’s and Kittyhawks, killing four Semovente and a pair of M14/41s.  However, I was now near the objective, I just had to weather one more turn of fire.

With only one undamaged tank platoon and my infantry locked down by the Stuarts and Priests, I had to gamble and I pushed all my tanks on, and around, the objective to prevent Fez coming forward to contest it with anything other than his HQ. My shooting concentrated on the HQ platoon and was too much for them as both tanks were destroyed.  This left the remaining M10’s a tough choice of standing still hoping they killed four tanks, or advancing to contest but leaving them likely to get flanked by my remaining armour.

Fez gambled on all staying still to shoot and charging his Recce patrol into the rifle position with a jeep attempting to leap over the wrecked shermans and ending upside down in the palm grove! The assault failed, to put it mildly. Fez called for his air support but after killing the Lancias and strafing my Semoventes earlier in the game they had obviously thought their day was over and were in the mess having a celebratory dinner.

It all came down to the next dice roll. The M10 platoon took careful aim but only scored three hits; not enough! My tankers had survived!
I only had five out of 14 tanks remaining but it was enough. Victory had again gone to the Italians, this time winning 6-3.

I finished the day on 21 points with my three victories.
All of the lists worked really well and lady luck drew them out of the hat in the right order against the opponents they faced. A great fun day with games played with much humour; I believe Fez could have the making of the Christmas number 1 if you like comedy songs!

Thanks to Fez and The Guildford Games Club for hosting the day and Battlefront for the prize support.
If your able to make the next event you’ll be in for a fun packed day and maybe a bit of gaming!