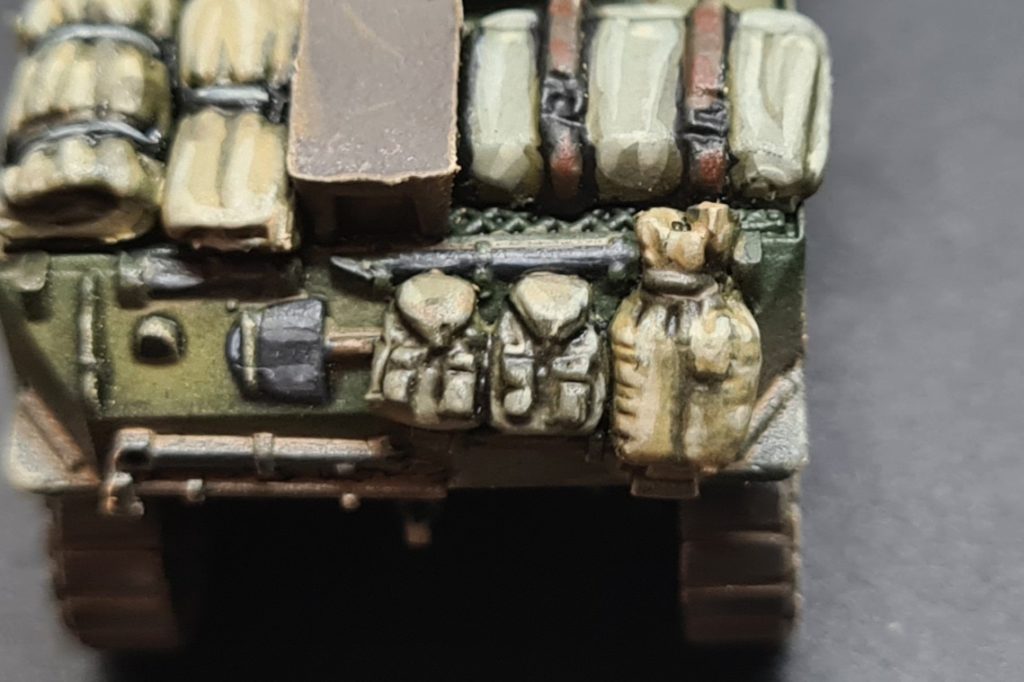 As many long term readers and listeners will know, I do love a bit of stowage on my tanks!  Stowage adds life and character to otherwise cold, lifeless, steel and its addition helps add some points of interest to a model as well as breaking up a monotony of olive drab for painter and viewer alike. Recently I purchased some Debris of War 15mm stowage so lets see how they look.

Debris of war do both 28mm and 15mm stowage, as well as a variety of terrain and basing products.  The 15mm stowage pack boasts 60 pieces of lead components, apparently two each of 39 different designs with each pack having a slightly different composition. You can group the items into the following categories:

Whether its holding ammo or rations, a sturdy crate can often be found on the engine deck of tank.  These from Debris of War come in a variety of sizes, the small crates being especially useful for ration boxes.  They need a little bit of cleaning for mould lines but the casts are relatively clean.

Jerry Cans are always useful for water or fuel, both being essential for correct operation of a tank.  The cans come either grouped up as a trio with a strap/frame around – handy for gluing to the rear face of hull or turret, or as individuals.  They are a little soft edged for my liking but adequate for use.

I’ve never been a huge fan of barrels on tanks, though they do occasionally appear in period photos, so having just two in the pack satisfies my needs.  They have a mould line that needs dealing with but are a good cylindrical shape (rather than the ellipse that some come as) with pronounced stiffening lips to benefit a paint job.

By far one of the most useful things in a stowage pack, personal kit is always going to be one of the most common things adorning a tank as day bags, duffel bags and literal sacks get stuffed, tied and hung from every nook and cranny.

The Debris of War set was especially generous with six different types.  There are two “sacks”, one sitting on its base and one flat backed so as to “hang” from side of the tank which are especially useful.  The other bags are somewhat weird in design, almost looking like scaled up British chest webbing with a long, thin, rectangular form with a single strap.  I’m not sure what they are meant to be, yet.  They also have a pair of more familiar day sacks which are flat backed to again lie against the side of the tank.

As with the rest of the set, casting is largely crisp with just a few mould lines to file clean.

All in all, a very good and useful selection.

Debris of War are pretty much unique in offering tow ropes as an option and are certainly to be thanked for doing so.  They come either as a coiled loop, perfect for an engine deck or the glacis plate of a larger tank, plus two ropes in a linear configuration, perfect for the side of a tank.

All three pieces were free of any need to clean up any mould lines, which is always welcome!

The bane of a tankies/tankers life, the set comes with a few different types of netting from carefully folded netting with no scrim, to heaped up scrim netting suitable for dumping on an engine deck.  The crim netting has a great texture to it and the bare betting is an interesting inclusion that works better than scrim netting for some forces/periods.

Yet another regular feature on any tank in any period (certainly for WW2 onwards), bed rolls and tarps will be stuffed in or hung from any surface that makes sense (generally not the sides of the tank in Europe due to the risk of being torn off when going through a hedge).

Again we get a good mix of types from long, flat bottomed, tarps to relatively compact bed rolls.  I especially like the “drooping” tarp roll that has some weight to it and looks great on the vertical back of a turret or engine deck.

The pieces have a few mould lines but nothing that isn’t typical for metal pieces.

Putting it to practice

I purchased the first pack of Debris of War stowage shortly before doing the Stuarts so they show the pieces off best. Let’s take a look at some of the pieces in situ.

I’d note that the Skytrex set has a lot of repetition and lacks any personal stowage so, whilst you get a lot for your money, its the same 15 or so bits, over and over. By comparison, the Debris of War set only duplicates each item twice so its effectively 30 unique items.

The strongest endorsement a review can give is “would you buy it for yourself?”  In this case, I not only bought one set to review but, after receiving it, I then went and bought a second set plus some of their 28mm stuff for a 28mm project I plan to work on soon.

I always feel that stowage is something that should be bought from multiple places to give the greatest variety of bits (he with the most bits, wins) and the Debris of War set will now join the Skytrex and S&S models sets in my bits box.