By Mark Goddard • Aug 26, 2015 • 6 comments
Stuarts -They are better than you think they are.
I’m on a one man crusade to prove that the best tank in late war, point for point is the humble Stuart M5 light tank. I am aware that this is an uphill struggle to pursuade people of it’s merits, but one day I will get the chance to take on Ben in a Stuart Vs Panzer IV/70 fight to the death and when I emerge triumphant on my one remaining light tank, I will be able to insist we get a new logo replacing the silly Gudarian’s ducks with a proper tank, from early war, in late war.
Anyway, there are a number of options for using Stuarts in late war, should you choose to, the British use them as recce, the soviets use them as a 10 tank mass of awesomeness and the US use them in squadrons of 5 as a light tank in a number of lists. Having played around with the US options I think the best option is to go for Confident trained Stuarts and I tend to use the 3rd AD from overlord as I get to auto attack and spearhead, both if which are very useful, the first because this is a very, very aggressive army, and the second because spearheading let’s you cover some more ground before the enemy start shooting you, which as we will see is absolutely vital. 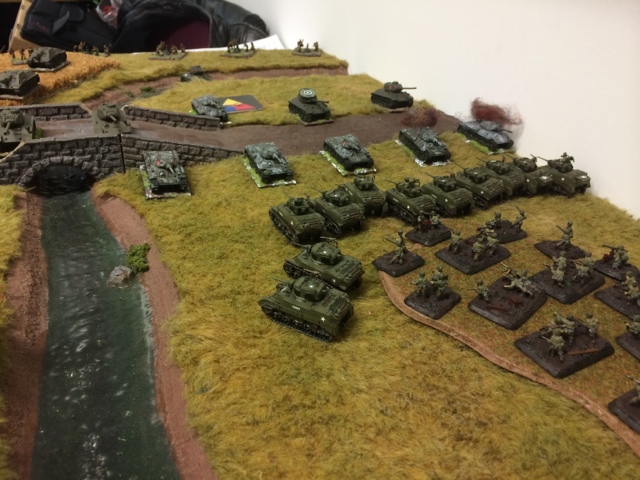 Stuarts vs T34s, suicide you say? I think not…


Why used trained Stuarts? I hear you ask, why not veterans like Bill Wilcox likes with his Chaffees? Well basically because  unlike the Chaffee, not only is your armour rubbish, so is your gun. Chaffees can line up fantastic shots and kill things at range like mobile snipers before dashing in for the charge, with a 2pdr the best the Stuart can do is go hell for leather and get to the side shots where they can do some damage. This means that you need tanks, trained means more tanks than veteran, more tanks means less dead tanks, even if you are harder to hit. This is because you are aiming to get to the juicy side armour of targets as soon as physically possible and if you work things properly you can limit incoming fire while crossing ground fast. If you think of the charge of the light brigade, you are pretty much on the right track. 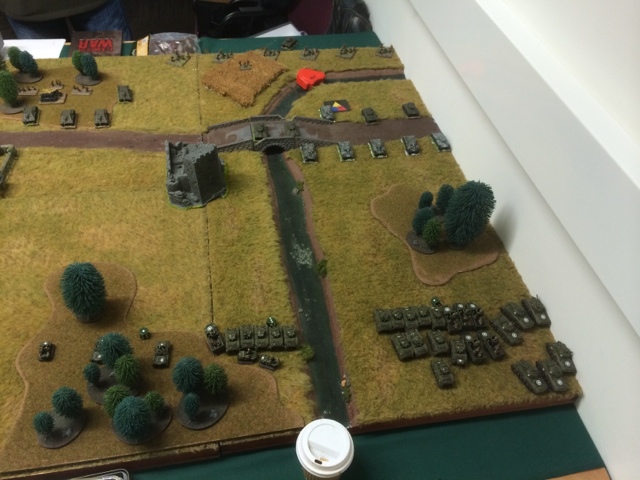 The other great advantage of going confident trained is it opens up a lot of points for support. Even after getting 17 Stuarts, at 1650 you can get tank destroyers, armoured mortars and Sherman 105’s for smoke and pinning things, recce and a full armored rifle platoon. That way, even if/when all your Stuarts die you still have a pretty handy group of troops.
I’m now going to go into how to deal with different types of target. At no point have I even considered how you might defend with these guys, Goodness only knows, I’d probably try to attack regardless and see if that works, it might… 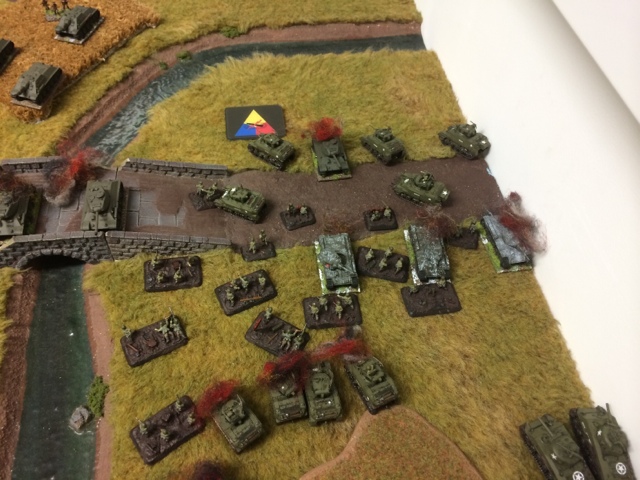 This is what you are aiming for.

medium tanks have side armour which falls to 2 pounders, this is particularly true for german armour like Panzer IV’s and StuG’s with their side armour of 3, if you can get a side shot it’s like you are playing an early war game with about 3000 points worth of tanks.
You need to hit like a steamroller: this means overwhelming force into the side armour of the enemy. You need to be getting at least 10 shots into a platoon of tank’s side armour to do any damage at all and stand a chance of surviving return fire. That means your entire plan has to rest on getting five functional Stuarts behind the enemy. Ideally these will all be from the same platoon as more hits at once mean that they can pick out juicer easy targets rather than getting allocated to the bloody jumbo and bouncing off. Do not think that a platoon of Stuarts which the enemy has the opportunity to shoot will fulfil this criteria, this means that you need to time your charge so they all hit at once. Charging one platoon at a time is a disaster and will just result in you dying, one platoon at a time. DO NOT DO THIS IT IS STUPID.
Stuarts have piss weak amour, you need to be out of sight or charging forwards with more tanks than they can shoot at in order to get those side shots. Attacking as a platoon of five against anything which can kill more than 2 Stuarts is asking for trouble, assume that more hits will kill than chance would expect, in fact assume they all will, then you’ll be pleasantly surprised when they don’t. This means you need more tanks than they have shots, this has to be multiplied by the number of turns shooting they will get before they get into the juicy side armour of any tanks. You move 16″ a turn over clear terrain, less over slow going, you will therefore need more tanks to survive the same distance at slow going.
Smoke is obviously your friend here as it reduces the amount of hits you take, either due to being harder to hit because the target stays in the smoke, or less shots being fired due to them moving for a clear shot. The best sort of smoke is direct smoke for this, as you can shoot it after the Stuarts have fired themselves. However, relying on direct fire smoke (being fired by Sherman assault guns) is problematic as they have an annoying habit of missing. Firing a smoke bombardment which leaves at least one target out in front is ideal, however, if in doubt just smoke everything, absolutely everything, if you can, bring a smoke machine and use it to temporarily blind your opponent.
The good thing about smoke is it encourages people to move forward to shoot at you, if the enemy moves closer, you don’t have to cover that ground yourself. It’s like moving in the opponents turn…
Stabiliser are your friend, think big, more is more, that includes shots. If offered a choice between hitting a target with ROF 1 and potentially hitting it twice with ROF 2, then go for two shots. You are rolling so many dice with this army that you will push the normal variation and every so often will get an amazing roll. When you are using a low quality gun on a low quality tank, then in all honesty what do you have to lose?
If you are doing a gallant charge then there is no point reserving your ammo, if you have any chance at all of even bailing the things you are charging at, then shoot and shoot twice. A bail means a chance of less return fire, which means a chance of more Stuarts arriving intact. You cannot let that chance go. If you can’t penetrate, shoot at something else nearby, after all these may be the last shots you take.
When you get into the rear arc, you will kill and bail things, bailing is more likely than killing (slightly) due to the fact you can bail if you equal armour and your firepower roll is a 50:50. This means you should expect to have some bailed tanks lying around after you’ve driven past them. You need to kill them before they remount and make you pay, that means infantry need to mop them up. Armoured rifles are fantastic for this (and for picking off any odd tanks remaining active after the charge.) if you can use some cover like a wood to advance through then that really helps as you will need to dismount before you can assault. They can also use their bazookas to scare off anything nasty lying around and also dig in on any objectives.
Unless you are exceptionally lucky you won’t be able to do this more than once a game, make it count, charge the objective and do decisively. 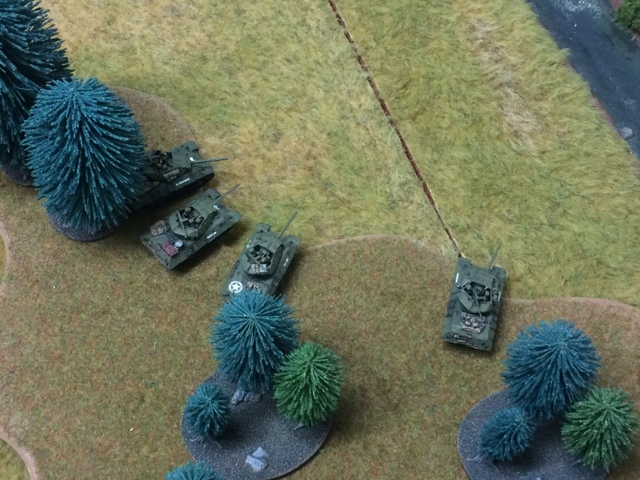 Ps if you are doing this, everything else needs to be supporting the charge, tank destroyers should be deployed for maximum annoyance and trying to pick off targets, remember, less enemy tanks means less dead Stuarts, which in turn means even less enemy tanks…

Against heavy tanks (by which I mean anything with side armour 6 or more): 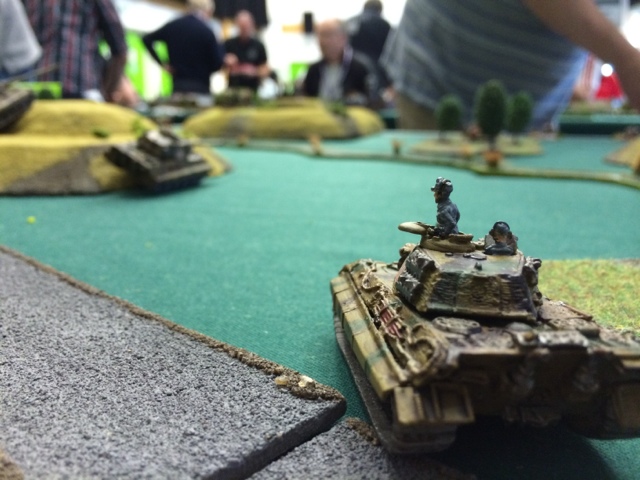 Hide, you can’t hurt them so don’t die trying. Smoke them then assault them with your armoured rifles, meanwhile use you Stuarts to be annoying, chase after objectives, make them move out of position and then drop bombardments on their heads. Tank destroyers are also good for dealing with this. 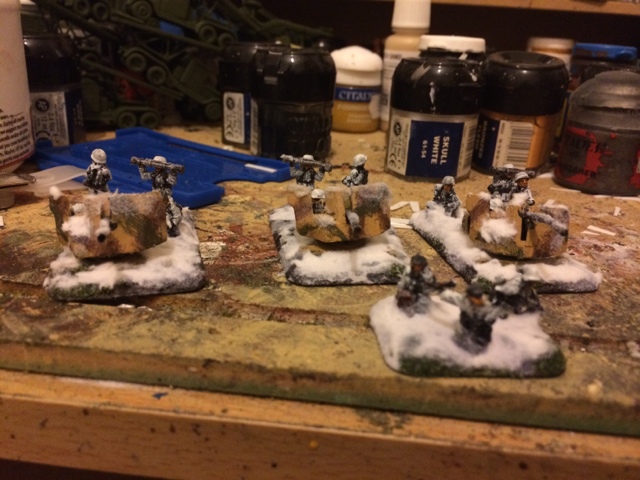 When you are in a Stuart, these count as anti tank assets

This is similar to tanks, except you want to get the enemy to stop being gone to ground and you don’t need to go for their side armour. Ideally, pin them with artillery or smoke them, form a gunline then use recce or tank telephones to lift gone to ground and then open up with everything you have until they are dead.
While you are shooting them, use smoke to limit the amount of things which can shoot you back, direct fire smoke is great for this.

Against infantry with anti-tank assets (note plural, one PIAT doesn’t count):
Kill any anti tank guns, drive to 9.5″, form a gunline and shoot, repeatedly.  Use recce to lift gone to ground, or use your tank telephones for the same. You have tons of MG’s so being within 10″ is to try and tempt the charge, you are going to be killing the infantry slowly through rate of fire, which may frustrate them enough to try a charge, if they do, you will get a decent amount of shots at them, and more importantly, they will be in the open and ready to be MG’d the next turn.

Against infantry without antitank assets:
Kill any anti tank guns nearby, shoot them lots, pin them, then assault. Remember, a Stuart is the same as a panther once they are both in close combat, the only difference is the Stuart gets there quicker and you will struggle to have 17 panthers plus support in an army. 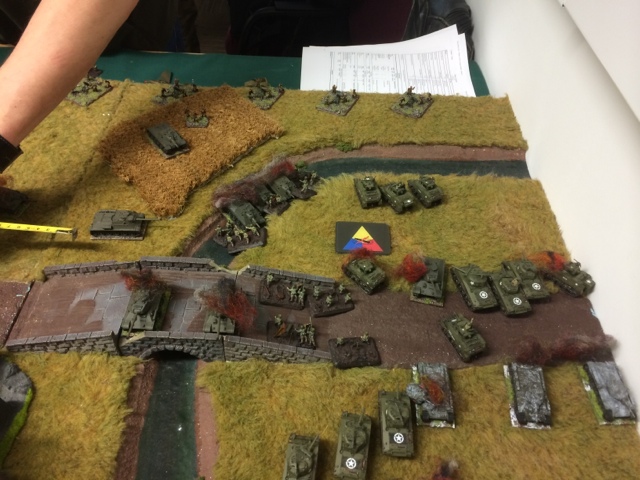 Onwards to the guns beyond…


Against aircraft:
You have tons of self defence AA, you should be ok, bunch up a bit to coax them in so they don’t attach other things. 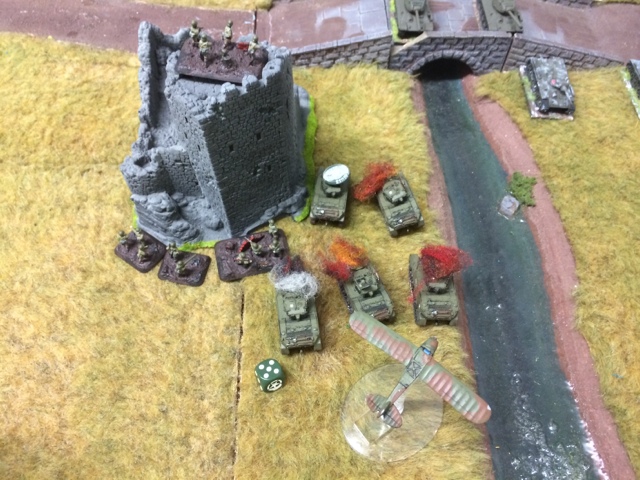 you are buggered, but no more or less than much more expensive tanks as you are too armour 1. Smoke observers and if possible pin the artillery shooting at you to reduce the incoming fire.

Finally avoid these mistakes:
Getting in a gun fight at range with better tanks than you (read: anything) you will die
Charging at unpinned anti-tank guns: you will die
Sitting next to terrain with infantry in: you will get no defensive fire, and will die.
Trying to get a side shot on anything you can’t hurt: you will die.
Not using smoke because you got excited at the prospect of time on target or a devestating bombardment: it won’t kill anything, then you will die.
Attacking in any way other than that which means all of your tanks reach the enemy at the same time, for instance in waves of reserves: you will die. (Instead form up out of sight then charge as a mass).
Forgetting that slow going slows you down: you will die.
I’m sure there are other common mistakes which I’ll be able to add to in future but this should give you enough to start with. What are you waiting for? It’s time to win the war in the same tank we started in (give or take some front armour and HE). 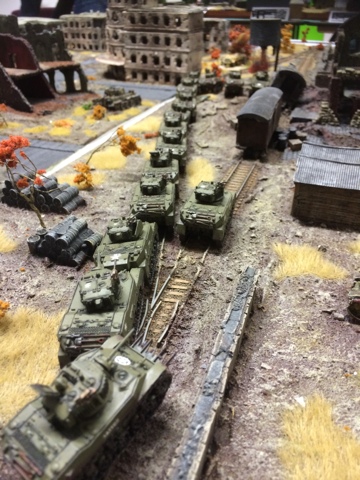 All aboard the Stuart Train (don’t do this in a game, it doesn’t work, you die)