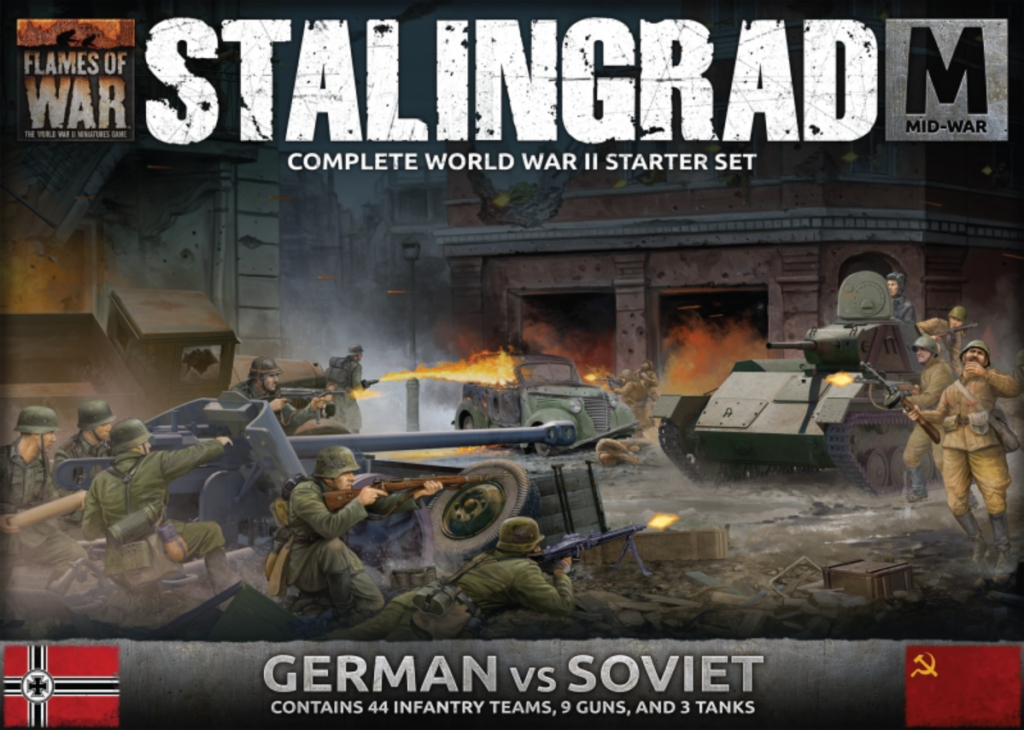 Starting up the Eastern Front

Earlier this week, various webstores started announcing pre-orders for the Eastern Front starter sets.   Whilst these were anticipated (after all, North Africa was supported by the excellent value of Tobruk and Kasserine), what their contents were to be was up for some speculation.

Thanks to some low-res photos, we now know there are two sets inbound with very different contents; the infantry based Stalingrad box and the tank-tastic Kursk box.  Like the North Africa boxes, they can be had for less than £40 if you hunt around, offering some fantastic value.

Let’s take a look at getting the most from these boxes.

The Germans have the following at their disposal

That all clocks in at 46 points.  Not a bad core force, although the two-gun 5cm platoon isn’t ideal.  We can easily use this as a starting point for a force, adding mortars, PaK-36 AT guns (giving us two-three gun platoons), maybe some 88’s and maybe some armour.

That comes to 40 points and, again, is a pretty good core to expand from.  Adding SMG armed infantry, 81mm and 120mm mortars (allowing the 76mm to shift back to AT if desired) to the formation will give it firepower and resilience.  Flame-thrower tanks can support an attack whilst 57mm anti-tank guns can give some answers to the big cats on the defence.

Alternatively, if masses of infantry are your think, you could buy a Strelk company box and use the infantry, PTRD and Flame throwers to bolster the two max-size heroes companies to two minimum size non-hero strelk companies with some trimmings.

If the Stalingrad box was infantry focused, then Kursk is definitely one for the armoured players.

The Germans have a… compact force consisting of:

All that clocks in at a surprisingly large 108pts!

One had to admire the tenacity battlefront display in trying to make mid-war panthers a thing!  They are likely the weakest part of the fore thanks to being an aggressive two-tank platoon, albeit sporting FA9.  If you can keep them to the rear and acting as anti-tank snipers whilst the mixed panzers and Tiger are more aggressive in confronting the enemy, then they can work.  The real issue with this force is that its already over 100pts so we have nowhere to go and nothing we can lose to get down to 100pts and still be legal! That isn’t to say its not without its uses, as we will get onto in a minute.

The Soviet part of the box has a decent model count.  We can get the following out of it:

That crosses the line at 114pts!  The core formation is 68pts so we have some options to make this a legal 100pt force.  We can drop two of the SU-85 and rely on careful and fearless to save them from running if the enemy does land a hit.  We can then use the points saved to add a Hero SMG Company and six mortar tubes to the formation, giving us a well rounded 100pt force.

With your powers combined…

The German portion of the Kursk box got me thinking.  The Stalingrad box provides a decent core force so could the Kursk box be used to provide the armoured support for such a force?  I tried to avoid buying extra bits but I did allow myself a single additional purchase if it did make sense.

I played around for a bit and came up with this;

We re-use everything from our Stalingrad box and all but two Panthers and a PzIVG from the Kursk box.  To this we add our single purchase, an armoured car platoon to give a cheap Spearhead and artillery harasser.  The mixed Panzer platoon gives is a flank attack unit whilst the Tiger gets in people’s faces and draws the attention.  I did try to add an escort PzIII to the Tiger, with the unused PzIV making up numbers in the platoon, but couldn’t get the numbers to work without dropping the AT guns.

We can then either run four SU-85 *or* seven reckless T-34 accompanied by three hero T-70, depending on what the odds of facing heavy tanks are.

A long and bitter war…

Of course, it goes without saying that everything in the box will also work for late war.  The Valentines, PaK-38 and T-70 are showing their age, admittedly, but not without use.  The T-34 comes with its /85 turret on the sprue which makes it a true multi-period hero.  the SU-85 also has the later -85M and -100 options on the sprue too (its possible to make the hulls swappable, you just need to take a blue-stuff mould of the exhausts.  The German tanks are pretty timeless though you will need to find extra Panthers and Tigers as the minimum platoon size increases.  A late war Soviet player may also consider the potential of a Decoy Tank platoon with a Tiger and two Panthers!

It’s also worth noting that the Nebelwerfer sprue will also build PaK-36 3.7cm guns with and without stielgranate rounds, plus Soviet 45mm short and long anti-tank guns, though you will need to find some crew!

The Stalingrad box is an instant winner.  it provides a big saving over buying the infantry and guns separately and gives a lot of options to expand from.  It certainly seems to have caught the most attention in the Brighton group.  The Kursk box is a great buy for the Russian players
(five T-34 for £35 or seven plus four SU-85 for a tenner more?) though its not as immediately attractive to the German player unless they are going halves with a Soviet playing friend.