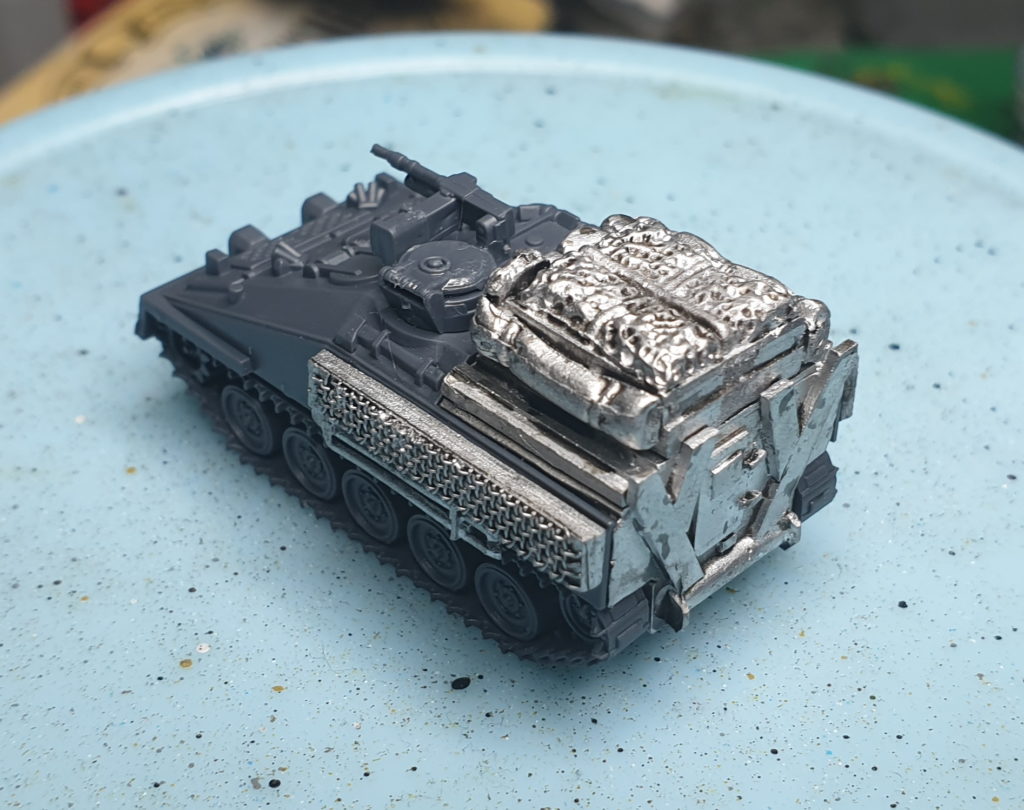 With our escalation league coming up and needing to stowage up a whole bunch of British armour, I hit up S&S Models for a pack of their bergans to fit out stowage bins and the like.

I was pleasantly surprised to find:

Time for a review then!

Bergans (and other large rucksacks)

A big field pack lashed to the side of the tank is a handy (if not bulletproof) way of storing clothes and the like and an oft-seen feature of AFV on extended operations or exercise.

The tricky bit is finding them in 15mm! thankfully S&S miniatures have us covered with this pack.

• A single, unadorned bergan
• A single bergan with day pack and webbing lashed on
• A strip of three bergans, with webbing, in a line

The single bergans are great for putting in bustle racks or lashing to the outside. My only complaint is that the addition of the webbing below the bergan makes the whole stack a little high, making it an awkward for some tanks with raised engine decks like the M1 as the pack catches as the turret rotates. It also sits a bit too high in the rack itself.

The triple line is great for going on the outside of APC, especially the M113 with its long flat side, or on the long flat sides of the M1 bustle racks, though you need to position it carefully so you don’t catch the engine when turning the turret.

The bergans themselves were generally cleanly cast, though a few had some excessive but easily removed flash.

Overall, it’s a quality pack of stowage that is useful for most NATO forces in Team Yankee and a worthy addition to the drawer marked “stowage”.

The Samson is a great little kit (open top hatch infill aside) that fills a variety of roles in the Iron Maiden British lists. One of these is the HQ for a medium recce squadron. A formation recce regiment would have a small number of FV106 Samson armoured recovery vehicles to pull CVR(T) out of terrain that even their impressive terrain crossing can’t overcome.

The FV106 combined a set of powerful winches and a mountable a-frame, with a large deployable earth anchor on the back to stabilise the vehicle during recovery. The vehicle also had large mesh bustles added to the flanks, along with another earth anchor attachment and mounting points for the folded winch a-frame.

The S&S kit exploits the design of the plastic base kit by having drop-in replacements for the top rear hull and the backplate. I’m always a little wary with trying to get a precision fit between plastic kits and other mediums such as resin or metal, but these dropped in perfectly.

The top plate is covered in stowage and camo nets, as seems typical for the type, whilst the rear plate has the earth anchor moulded on it in the stowed position. This does sadly prevent it being modelled pulling something out, but that’s probably not a common requirement and keeps the part count down.

One thing I noted quickly was that the assembled model became back heavy very quickly, often rolling onto its back!  I had to add lead ballast to the nose, using some lead sprue offcuts, to get it to settle down.

The kit then has three additional parts; the left and right mesh bins (the left-hand one also having the folded winch frame mounted below it), plus the other earth anchor blade. These just glued to the respective side. The mesh bins look the part though are not hollow (not unreasonable given the scale!), though the right hand side one seems a bit small compared to the photos.

There are a few minor letdowns of detailing. The kit lacks the rear stowage bins of the real thing, though they are easily modelled on. Instead, it oddly carries the exhaust (picking up with the plastic kit) all the way aft, rather than just terminating in the upturned end, halfway along.

The rear plate has the window modelled but it’s not particularly square to the door which seems a little careless, though it’s a small bit of detail.

Neither the rear or side earth anchor are shaped correctly. The back one isn’t too bad, it’s just a bit squared off. The side one lacks the tapering to an edge and the gaps between the prongs are squared off and shallow. I’m conscious there may be some manufacturability considerations that may be in play, but it’s probably best to see the side anchor as the basis for modification rather than glueing straight on!

With the exception, perhaps, of the side anchor blade, these are minor quibbles that most won’t care about or notice and don’t detract massively from what is otherwise an impressively constructed upgrade kit.

In terms of usage in the game, the Samson doesn’t appear in the rules and the way bogging works in Team Yankee precludes any use for a recovery vehicle. Plus getting hold of a single Spartan to use is tricky as the box of four typically gets used up quickly! However, the HQ of the medium recce squadron does have a pair of Spartans so I’ll use the Samson to mark the 2iC’s ride.

All in all, the Samson is a good kit with excellent construction design but with a couple, correctable, minor detail quibbles for the rivet counter. It’s certainly a great way to add some interest to a Spartan HQ and I’d recommend it for the consideration of anyone starting a medium recce squadron.

The FV432 APC is the basis for many specialist vehicles, but one of the most ubiquitous is the command variant.  Sporting a fold up tent at the back, and stowage and a generator on the top, plus big whip aerials, the command variant provides a link for upper command to the fighting units.

This is a simple, one-piece kit for the plastic FV432 kit. It replaces the top hatch with a panel of stowage, aerial box and wire reels for an FV435 command variant. The panel gives the right look for a period command vehicle, only really missing are the frames for the “penthouse” tent that is assembled at the back, plus the left side additional aerial mount.

It’s a simple upgrade; when building the FV432, leave the top hatch off and drop the panel on, with the long stowage box on the left side. Two cut-outs line up with the hatch mounts to assist alignment.

It’s a simple addition that is probably seen as a starting point for a centrepiece model, you’ll really want to model the penthouse frames and aerial mounts to get the most out of the kit, but it does the job!

Whilst really a battalion level HQ vehicle, I plan to use mine to mark the Company HQ vehicle.  It could also be used as part of a scenic objective.

The Bergans are currently on the online shop.  the two upgrade kits will be, but in the meantime shoot Shaun a message at S&S Models and he can sort you out in the meantime.  Shaun has let me know that there are some LAV upgrade kits in the pipeline so I guess I’d better go buy a box of LAV25!