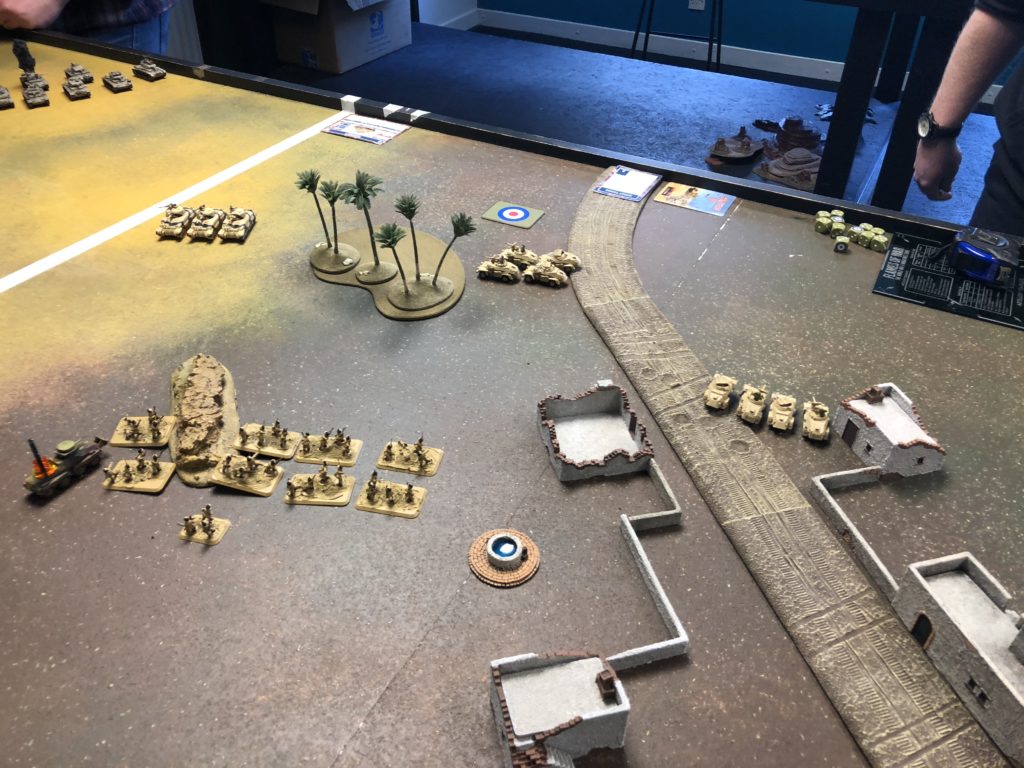 Today Mark G looks at a recent game Vs Mark N to highlight the need for offensive action in V4.

Its all about the offence

For me V4 has been quite a step change in what is required out of an army list and playstyle to be effective.  As a veteran of V3, with hundreds of games and several ETCs under my belt, I had reached a comfortable area, understanding the meta and what would or wouldn’t work.  As many people know, defending was highly popular in V3.  US Infantry camps, with Tank Destroyers and Time on Target Artillery had the answer to most things and there was a very effective variation with RV British (better in same ways due to the ability to auto attack if needed).  Auto Defend was great and allowed you to focus on making your army a one trick pony.  On the other hand auto attack became almost mandatory for tank companies who never wanted to end up facing the prospect of defense against another tank company.

Then along came V4 and this meta was blown out of the water.  Now you have a degree of control over whether you will attack and defend, however it is never certain, so your army needs to have the ability to adapt.  Missions have been tweaked and you can’t just auto win by sitting still and doing nothing.  Arty is no longer the auto answer to tanks (hurry).  I could go on…

Its now a year into V4 and with more lists and stability in the More Missions rule pack (after a sensible tweak last year) the new meta is starting to develop, and its so refreshing.  My takeaway from it is that unless you are massively specialized you want to be attacking and its all about that critical assault.  Games are about taking objectives (a mantra you should keep repeating to yourself) rather than the company/formation break which is a lot rarer now with the new morale rules.

A recent game vs Mark N highlighted this nicely.

To explain my logic I’ll include a short battle report. We played 100 points and used “more missions”.  I chose attack and he chose manoeuvre (he looked at my Italians and thought I’d defend).  We ended up playing contact (basically ‘fair fight’ with meeting engagement and delayed scattered reserves for each side).

Mark N had an easy choice with his reserves putting the Churchills in at exactly 40 pts.  I left my Tiger, Guns, and mortars off table.  Yes I made a mistake here.  I had actually forgot I had those guns in my list and by the time I remembered it was too late – had I remembered this the mortars (of both types could have been on table!). With Mark N’s Churchills off table, I was saw my chance to go massively on the offence.  If I could secure the objective before turn 4 then it would all be over before I face the issue of the Churchill.  With only 6 tanks, some infantry and a patrol of carriers I reckoned I had a good chance.  Mark N deployed sensibly with the Shermans on one obj and infantry and crusaders on another (he needed the AT defensive fire to stop an alpha strike by the Italian tanks).  His carriers were ready to go to support either obj however were only a threat to my infantry.

I spread out, maximising my spearhead moves but allowing me to swing my armoured cars in different directions.  My high AT actually focused on the Crusaders defended objective as this was my intended target.  My plan was to negate the Shermans by getting them bogged down shooting at armoured cars thus preventing them reinforcing the other objective or going on the attack. I went straight forward on the right flank, concentrating fire on the Crusaders, bailing 2 and making them flee within 2 turns.  The scene was set for an assault.

The armoured cars on the left started to approach the Shermans making Mark hesitant to push them forward.  To add pressure the infantry, moved up as well. Turn 2 saw the Italian tanks position for an assault along with the infantry.  Enough shots were pumped out to pin the infantry and then the armoured cars started to make pot shots at the Shermans which they had started to flank. The Italian infantry assault got pinned with 5 shots (if I had bought my assault mortars they would have been smoked and being hit on 5s), however the Tanks went in.  Lots of rounds of fighting ensued with one tank bailed but thanks to the formation commander, the surviving defending team was pushed back.

I was now on the objective.

There little Mark N could do now, the air failed to turn up and the 2 surviving Shermans continued to be fixed by the cars while inf got ready to assault. Even if the Churchills turned up now, they couldn’t be on both objectives.  The carriers were destroyed in my final turn and the sole survivor brutally gunned down.  A good day for the Axis for an 8:1.

This scenario shows that seizing the initiative and attacking is key.  Actually both armies were in a similar situation due to both sides having heavy scary tanks in reserve.  While I didn’t fancy tangling with his Chruchills he equally didn’t want to face a Tiger with them, especially when combined with Marders.  Equally the inclusion of the Hurricanes means I don’t want the game to drag on, as the Marders will eventually be picked off by them. The ability for the attacker to win a game by finishing a turn holding the objective is a massive difference to v3 and encourages this fast, aggressive play.  In V3 Mark N could have kept his carriers back and drip fed them 1 at a time onto the objective to keep it ‘live’ long enough for reinforcements.  Now, he has to react as soon as I am on it.  As I say in the intro, you cant just sit still and hang on any more.

Now consider if I had had my mortars and assault mortars on table.  Not only would those British infantry have been pinned from the arty, the assault mortars would have been firing between 9-18 shots of smoke (depending if they moved) before the infantry assault, which would have resulted in them not being pinned.  This combo is perfect for the set piece attack, eg attacking in hold the line.

Additionally when starting with all units on table there is a need to consider how to use the Tiger.  I hear lots of people saying they don’t produce their return of points.  That’s a fair assessment if you are popping Crusaders or Stuarts, however a bit different in the world of Churchills.  While its an effective pill box and perfect for baby sitting an objective. I think it needs to be viewed through an offensive lens;  my Tiger moves forward.  Its a near unstoppable beast that picks an objective and goes for it.

While players say the best way to deal with a Tiger is to ignore it, they can’t when it is being rammed down their throats straight towards their lines. You do need to be aggressive, although also considered (use cover and LOS blocking terrain, smoke etc) its to valuable to be cavalier with.

Considered risk management is the name of the game here.  Combine it going forward with infantry and tanks, and you are creating a lot of headaches for the opponent, making them react.  The more an opponent has to react they more likely they are to make a mistake which can be exploited. As demonstrated, V4 has changed the FOW meta dramatically, making a more mobile and dynamic game that requires a change in mindset.  Fortune currently favours the bold, and your army build needs to be able to attack, although able to deal with times you have reserves.  No longer can you just sit there, even in defence you need to be prepared to counter attack.  Seize the initiative, and force the opponent to fight on your terms, do not give them the ability dictate the game, keep them guessing.

Finally when in doubt assault with a Tiger, you wont regret it (caveat don’t assault 17pdrs!).