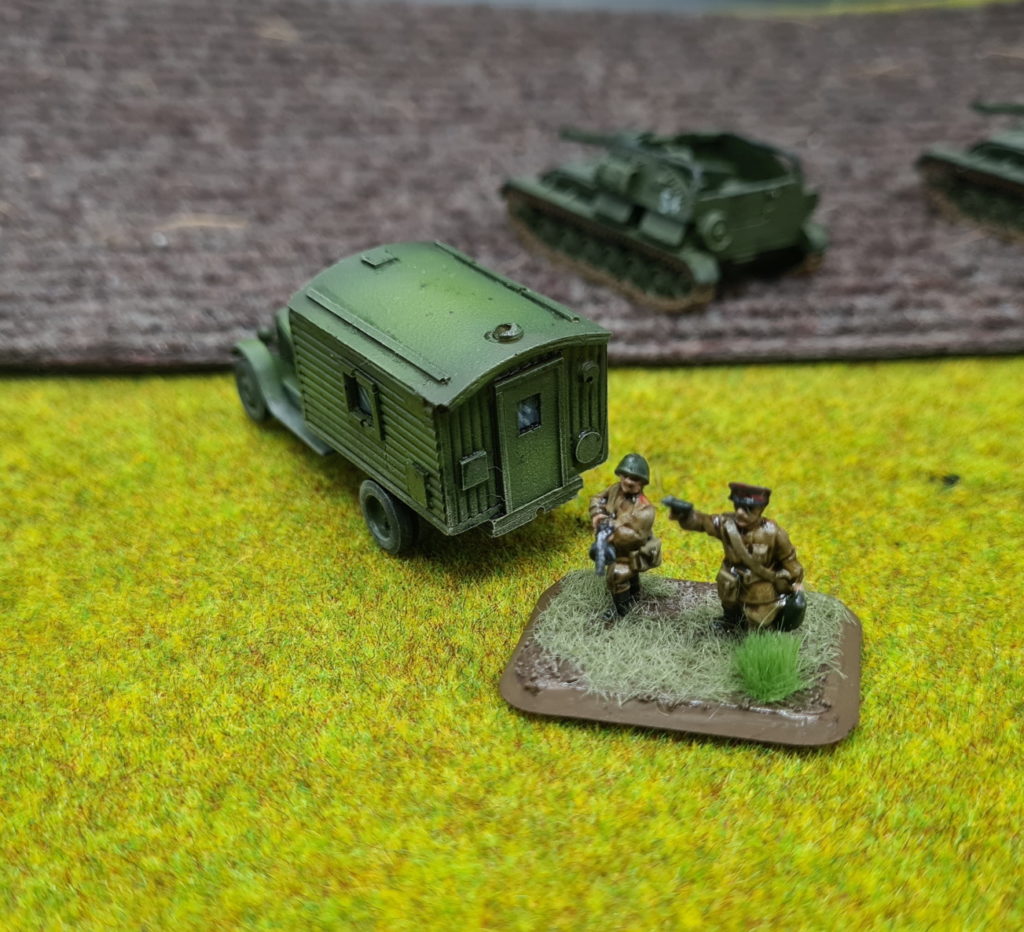 The speed of advances in mechanised warfare meant that specialised equipment such as radios and repair facilities needed to keep up with the forward units and the easiest way to achieve this was to take a standard truck, remove the flat bed and mount a rectangular body to contain all the kit.

As such Office (radio-truck) and workshop body conversions of standard trucks were a common feature during the war, albeit less so with the Soviets.  Even so, they modified some ZIS-5 and twin axel ZIS-6 trucks to take care of these duties and the Germans also modified the quite large captured fleets of trucks they had.

Recently S&S models released a resin set for each body type and were kind enough to send us some review copies.  The truck bodies are designed to work with both the Zvezda and PSC models of these trucks and I’ll take a look at the resin bodies with the Zvezda truck.  The bodies have no game use but make great objective diorama fodder or for use in special scenarios.

The Workshop body consists of two pieces, the main body and an overhead extension that goes over the cab roof.  The one I was supplied with had the two bits already together but I’m not sure if that is the standard.

The body itself has windows on three sides, plus a door on one of them.  The door side also had an access panel and a thin rectangular feature that I’m not quite sure of its purpose but at least breaks up the slab side of the model.  The door itself was a little odd in that the lower lip of the window didn’t touch either side of the door, which let me wondering if it was meant to be a window sill or a handle.  I went with window sill but I could be wrong.

Another little detail issue was that the crease on the side to mark where the sides fold up/down was well defined on the left but split into three lines on the right, like it had been corrected but not covered over.

None of this is especially show stopping though some may feel that it needs a bit of filler.

The cast is relatively clean with no mould lines but there were a couple bubble marks, but they were small and would be easy to fix with green stuff.

A home for the staff team!  The office body is a single piece sculpt with an interesting corrugated look compared to the slab sided workshop.  In addition to this texture, the sides have a window on one of them, a door on the other, plus various access panels and the like to add detail.

Much as with the workshop, there were a few bubble miscasts in the window frame and the two lines running along the roof.  Nothing that can’t be fixed with some plastic putty or similar.  There were no mould lines and, bubbles aside, it was a clean cast.

All in all, both bodies open up some interesting possibilities for objectives and scenarios (convoy ambush with partisans!).  The bodies are relatively cheap, which is always nice for non-essential models like this.  The bubbles in the mould are the only casting issue the models present and its one that can be cleaned up fairly easily.

I gave the models a quick paint job via airbrush.  The primer took to the resin with no issue.

All in all, if you want some characterful additions to populate an objective then I can certainly recommend these truck bodies for your consideration.

Note that S&S models originally sent me a pair of payloads for the flatbed too which are currently still AWOL.  These are on release and when I can find mine I will get a review up.