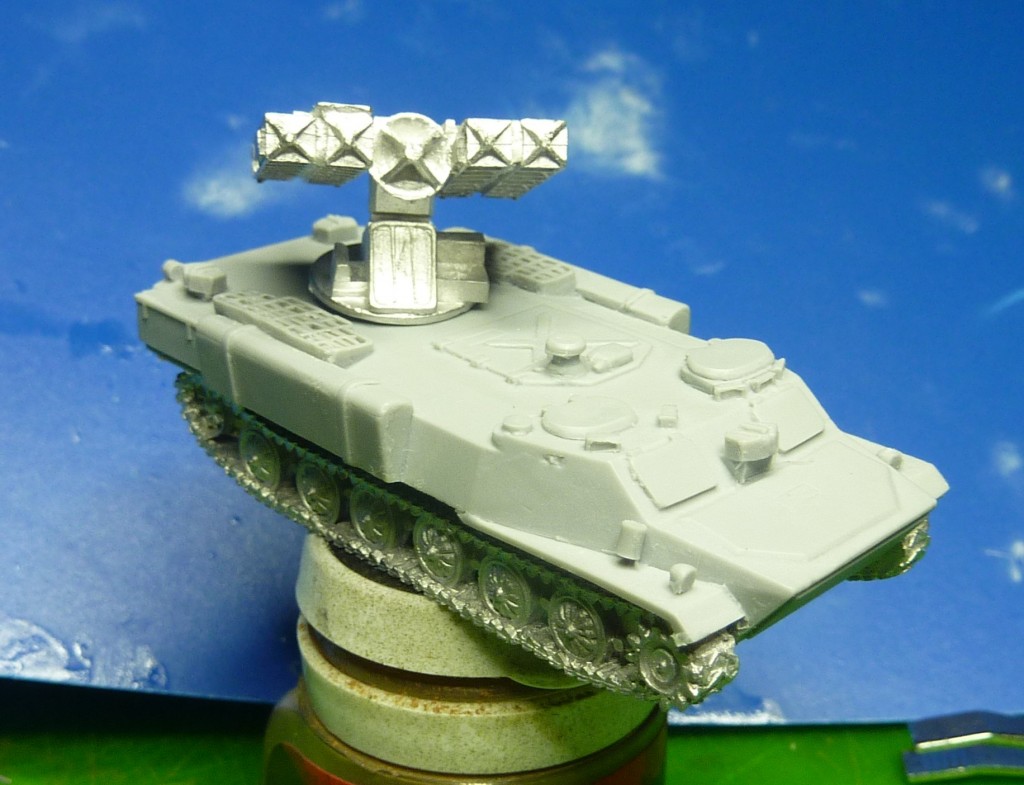 This week Lee looks at a new Cold War offering from Skytrex; the SA-13 Gopher self propelled Surface To Air Missile.

So, surprising no-one, I have utterly failed to stick to my pledge of sticking to a small US force for Team Yankee until BAOR comes out and I’m now the proud owner of a small Soviet tank force.

18 T-72 and a full strength BMP Company isn’t that small.  It’s small compared to a Division.  Shut up.  It’s not like Matilda has to go to university when she’s older.

Anyway, I was having a ponder about the BMP OP and decided I wanted a proper PRP-3 “Val” Mobile artillery post.  A quick search found that Skytrex made one.

Now, Skytrex are one of those old veterans of the 15mm wargaming cottage industry, putting out various scales of WWII and Cold War models in white metal for what seems like an age.  I didn’t really pick up on them until I got to my second army, Brit Paratroops, where they provided a useful source of pack howitzers and alternative infantry figures to flesh out a Battlefront company box.  The models were okay, if unspectacular.  They had better proportions (not hard considering the issues with the BF paras…) but felt like very flat models with little pop in the detail such as webbing or fire arms.  Not bad, not great.  After the paras I used them for the occasional side piece (along with regular purchases of their excellent general stowage pack) but otherwise they fell by the wayside.  They appeared to disappear for awhile and I assumed that they had folded.

But it appears that the old owners passed Skytrex along to new owners and the new owners, noticing an uptick in Cold War sales seem to be building on the range.  Furthermore, they had even moved away from white metal as the only building material and the newer figures had adopted resin hulls with metal tracks.  It was certainly an interesting development and the front page announced a new SA-13 model with a discount on the purchase of four of the models (4 for £27 comparing very favourably to the BF equivalent – reviewed by Mark previously).  Skytrex also seem to have added decent photos of all their range now (seem to recall they were always quite small photos and sometimes absent entirely) which suggested that it looked decent enough.

Seeming as the local store had sold the last of its Battlefront Gopher’s, and I had been on the receiving end of the things enough to know I wanted in on that action (plus being privy to the “Leopards” preview cards so knowing that Tornado would definitely need to be dealt with), I decided to add it to my basket to join the BMP variants I will cover another time.

The SA-13 Gopher is a self-propelled Surface to Air Missile system that was developed by the Soviets to repalce the SA-9 Gaskin and provide point defence of forward units able to keep up with the tanks and BMP that made up the main assault.  It combined four Infra-Red (‘heat seekers’ to use the much hated colloquial term) missiles with a simple optical guidance system, ranging radar to save wasting rounds, and a moderately armoured chassis, called the Telescopic Erector Launcher And Radar, or TELAR)  based on the MT-LB tracked utility vehicle.  It was broadly comparable to the US MIM-72 Chaparral (albeit with a much smaller warhead), Franco-German Roland and UK Tracked Rapier (the latter two being optical/radar command guided rather than IR guided) in role and capability.

A rather damp SA-13 – note the two inner missile canisters have been removed. (wikipedia)

The SA-13 saw service with the Iraqi forces and claimed 14 kills, mostly when allied aircraft were operating at low level in the early stages of the conflict. Not that that did much to even the score…

I found this article very useful for detailed shots of real world examples.  Wikipedia also has some good photos and info.

In Team Yankee the SA-13 provides the Soviet forces with a long ranged, high firepower anti-aircraft unit, capable of providing coverage of most of an 8×4 table whilst having a decent chance of turning a hit into a kill.  Its main weakness is a lack of night fighting capability and a lack of armour allowing NATO forces to try and quickly dispatch it to clear the way for their air assets.  Its hard not to want to fit at least two in a force to compliment a ZSU-23-4 platoon.

The Sktrex model has some similarities to its Battlefront stable mate in that its not a high part count model by any means!  You have a resin hull, two metal tracks, a metal central launch structure and a metal upper launcher incorporating the four ready rounds and ranging radar dish; one less part than the BF model. So simple, even conscripts can build it

As can be expected, this makes for a relatively quick build!  This is helped by some very clean white metal parts although I did find that the hole in the hull was smaller than the peg on the launcher. Nothing a file couldn’t fix.  The contact area for the two parts of the launcher is fairly generous but the top part isn’t well balanced so I found it better to sit the whole assembly upside down whilst the superglue dried. All in all, the unit was quickly assembled and ready for painting.

Those who read my Zvesda reviews will know I like to do a side by side comparison of the models with a competing brand.  Choices for the SA-13 are fairly limited with only Battlefront and QRF  appearing to have a competing product.  Thankfully my regular opponent, Nathan, had a brace of the Battlefront ones I could compare without having to reach any further into Matilda’s ISA.

I’ll say now that for some reason my camera seems to have gone for a particularly grainy quality – especially on the side shot, so apologies for that.

Side by side and length and height are fairly equal.  There was a marked difference in tracks/roadwheels.  The Skytrex model has smaller road wheels with more sag on the tracks, matching the photos of real world examples but it also seemed to have larger gaps between the roadwheels compared to the Battlefront one, which seemed to be better a better match in that specific regard.  The Skytrex one has large panniers on the side – more on those in the next photo. Front on view and both models have good and bad features.  Firstly, the front view suggests we have two different models of SA-13, as the Sktrex model has the 9S16 Flat Box RF Passive Detection System on its front and rear hulls consistent with the later 9A35M2 launcher.  The BF one does not, suggesting it more reflects the earlier 9A34M2 model.  I couldn’t find any “entry into service” data to suggest if the Skytrex was too late for 1985.  If anyone knows an answer (with source) then chime in below!

The Skytrex model has some better definition on the canopy of the launch turret (the BF model is just a flat plate) and has decent depth the features.  But the panniers are a bit dull and lack definition when compared to the real world example above.

The BF model has more detail on its lower hull (driving lights, planing surface) and, excepting the flat panel where the canopy should be, better turret detail of the antenna package and optical seeker.  The BF model seems to have the radar set too far forward and high compared to the photos here.  I’d say the Skytrex model hits closer on that (and has the dish receiver arms orientated correctly to boot). From the top, the two are similar in major features but the BF model generally has more definition in the finer details such as the hatches and driving lights cluster – excepting the mast on the large top hatch which is closer to reality on the Skytrex model.  The Battlefront launcher mast has a better sense of depth on the electronics systems although the actual launch tubes look slightly better on the Skytrex model.  The walkway grids are different in shape between the two but may be driven by reflecting different variants of the TELAR.  The Skytrex ones have some ugly infill but that can be removed with some effort. The Skytrex SA-13 is not a bad model by any means and I’m not regretting buying them.  It has a suitable level of detail for “other side of the board” standards (pretty much where a SAM should be sitting!) and even stands up to a cursory close range glance.

However, making allowances for the slight difference in variant, the Battlefront model has better “up close” detail and I think I’d probably enjoy painting the BF example slightly more as it has more detail to reward the painter.

All in all, there’s an argument that you get what you pay for and the Skytrex SA-13, at 80% of the price, is probably about right in that regard.