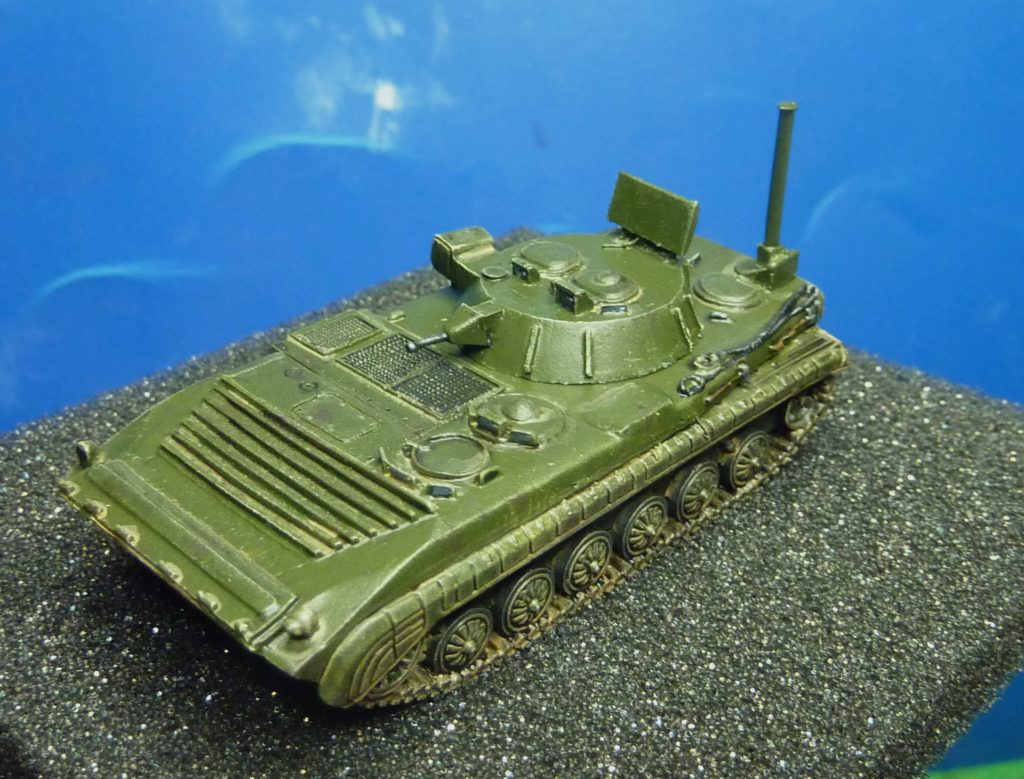 In my previous Skytrex review, I noted that the only reason I had even found out that Skytrex had an SA-13 was because I was looking for a PRP-3 Artillery OP variant of the BMP.  Skytrex had one (and unlike the only example, had actually bothered to get with the 21st century and photograph it).  I grabbed one at the same time as the SA-13 along with another BMP variant, the recce BRM variant.  Lets have a look at it!

The BMP-1 not only defined the Infantry Fighting Vehicle concept, it also provided a new chassis for the USSR to use for specialist armoured vehicles.  Along with command and armed reconnaissance variants, an artillery reconnaissance variant was developed.  This took the BMP chassis and replaced the single man turret with a larger two man turret that incorporated better external visibility, an optics package with night vision capability (nut no thermal capability) and a SMALL FRED J-band radar good out to 20km for detection, but only a PKT machine gun for firepower.  The rear chassis had only a single semi-circular roof hatch and most vision blocks and firing ports were deleted as the rear was largely filled with radio equipment and map boards.

In role, the PRP-3 was tasked with shot adjustment and target acquisition for artillery and guided missile units, with one being attached to each artillery regiment.  The PRP-3 entered service in the mid seventies and would eventually be replaced, starting in the eighties, by the PRP-4 which improved the radar (TALL MIKE) and added a thermal vision capability.

As is usual for Skytrex, no expense has been wasted on such frivolities as “packaging”, the model coming in bubble wrap and a plastic bag.  Emptying the contents we get the low part count one expects of a non-plastic model  – the turret is in two pieces with just the SMALL FRED radar dish separate.  There are no open hatch options which is shame.  The rest of the part count is made up of hull, tracks and the (what I presume is a) meteorological mast. A quick inspection showed some poor casting and mould line placement that had to be contended with.  The turret mould line runs mid way around the turret so is quite obtrusive and featured a casting defect right at the rear.  May be one to hid with a tarp roll in future! The placement of the tracks to the hull suffered from a low contact area on the hull, making for a slightly wonky connection that is thankfully not too noticeable.

All in all, assembly was very quick with only the track to hull connection seeming particularly troubling.  That said, the unpainted model was in the figure case for a few months and held up well and you can’t ask for more that that.

The next question is, how does it look compared to the plastic BMP that no doubt makes up most people’s collection? In general, the plastic BMP is streets ahead of the white metal version, although there are a few points of merit with the capture of the vision blocks and driving lights for the Skytrex contender.

Size wise we run into a few issues: and longer than the Skytrex model, but narrower.  On the bright side, the OP should be sitting off on its own, out the way so shouldn’t be seen too often alongside the battle taxi ones.

Engine intake grills and crew hatches are well captured and the hull forward of the turret is very nice.  But it goes downhill aft of the turret as details becomes soft and malformed.  In general the turret detail is good. The poor state of the rear hull and turret casting is quite evident, as is the lack of crispness of the tracks.  Filler ports for the door tanks, a distinctive feature, are missing as is the rear firing port (which may or may not be correct) In contrast to the tracks, the road wheels are crisp and well defined, although there is some detail missing compared to the Battlefront version.  Rear fuselage features on the left side, such as tools and vision locks all seem to suffer from a poor mould. The right side is slightly crisper in detail. The BMP-OP has one job and that’s to call in the fire.  In an army of 5+ skill checks that +1 bonus is essential so careful placement is necessary to get the best results.  The PRP-3 is no better armoured than any other BMP but it does at least have protection versus artillery and small arms fire and the enemy should have more than enough things higher up the pecking order to send ATGW and HEAT rounds at.

The real issue is that Soviet artillery that requires the OP is a little underwhelming at the moment.  The big guns suffer from the de-tuning of artillery with Team Yankee and there are no cheap mortars to be seen (somewhat frustrating given the propensity of the 120mm heavy mortar in soviet use!).  That said, there is still a place for that one shot of smoke and if you take a battery to get it then the extra point for an OP is really a necessity.  The arrival of guided artillery munitions may also improve their lot but given NATO forces are hard to hit then it may be a little early to see the Acacia as the saviour of Soviet artillery.

The East Germans can also make use of the OP and the better skill makes artillery even easier to use and find a place in the force.

All of the Skytrex vehicles retail at £6.50, a pretty standard market price for the non-plastic offerings.  We also have to factor in a £5 shipping fee so buying *just* a PRP-3 could prove very costly if not part of a larger purchase!

A cheaper option is to get a single BF sprue (£5.20 from BF, plus shipping) and scratch build our own offering, but that assumes we treat our time as worthless (the wife would probably agree with that sentiment on my hobby time…).  Well, I guess you could use it un-modified as Battlefront seem to intend but where’s the fun in that?

All in all, the Skytrex PRP-3 is one of those models that you don’t *really* need but does add some flavour to a Warsaw Pact army.  Whilst a relatively accurate reflection of the PRP-3, it doesn’t match the Battlefront BMP dimensionally, and its mould is not the cleanest on the rear hull/turret. However, painted up and stuck out on a flank, in cover, those two factors are going to matter less.  The cost is competitive so long as it’s being purchased as part of a larger order to mitigate the shipping cost.

Ultimately, it will suffice until Battlefront, or a third party, do a “forgeworld” and start offering alternative resin upper hulls and turrets to upgrade the Battlefront plastic kit to a PRP-3 standard! (hint – seriously, someone do this and the BRM recce version and I’ll throw money at you)