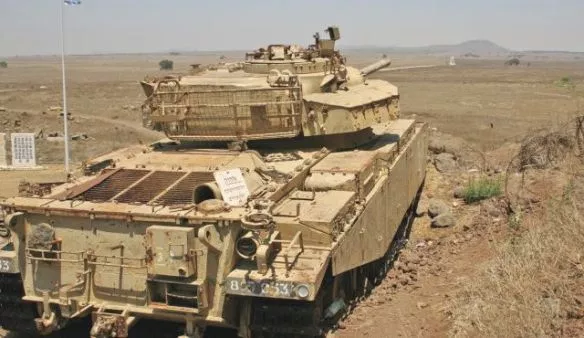 Sho’t Through the Heart…

… And Yom Kippur to Blame.

More and more I have been coming round to the notion of having a force for either side of a book or games system; partly for a variety for me but also to ensure that I can play different people and avoid any unsightly Blue vs. Blue situations.

I still love my Egyptians for Fate of a Nation, but I always knew that getting an Israeli force to oppose them or to fight Eddies Egyptians was something that I really wanted to explore. I still consider Fate of a Nation to be the single best system Battlefront have produced; both for balance, gameplay and general feel of the period.

So before the 25% off launch event ended last year I took the plunge and picked up a compact Israeli force that has languished in the pile of shame for more than a year now… It was time to dust it off, get it built and get it on the gaming table.

Again, this was a first for me – planning an army before purchasing anything. Normally I’d say this was a good thing but because we’d had very little in-game experience at that moment so my first iteration was a little wonky.

My main formation is going to be the awesome Israeli version of the trusty British Centurian – the Sho’t. For me, the Sho’t hits the sweet spot in terms of punch for your points. The AT18 of the 105mm main gun is more than sufficient to take on 90% of the armour of the opposition, whilst FA13 is enough to take on all but the most of their opponents – the T-62 and ATGWs.

This gives me a decent number of hulls on the ground and a significant threat that has to be taken on.

The next portion of the list was potentially odd at first look but let me set some context. Playing Germans in Flames of War having a single formation 99% of the time has bitten me more times than I care to think about – the answer to a second formation is usually recce. For the elite Israelis, I thought that using that insight I would include a small, cheap, mobile formation to give me some redundancy.

So the minimum requirement for the formation is the HQ and 2 platoons… so that is what I popped in.

This formation is a steal. A. Steal. The Sayur platoons are deceptively resilient; they are hard to hit, high, skill to Shoot & Scoot, have a 4+ save vs. everything and even when they do die they have a 2+ Morale. Used well they can be a thorn in the side for a long time.

The final choice was in Support and I went with all the Skyhawks I could muster. I love the 1000lb bombs and the DEFA 30mm guns – always useful, they have the range to influence the battlefield and even if they stay in reserves they are so useful to have.

This gives me 90% of my force in core formation units but it does have some obvious weaknesses. This was my starting point that has dwelled in the garage for the last 12 months.

So initial thoughts out of the way, and again with nothing tabletop ready, mentally I’ve begun tweaking this list.

I’m still convinced that the Sho’t is the way forward as the MBT for an Israeli list and I’m equally convinced that having a Sayur secondary formation is amazing; it’s the composition that I’ve been rejigging.

Despite saying that this is still the main company I am having to cut some points to include other things:

Loosing 2 of the Sho’t is a bit of blow but frees up points in the most efficient way possible and adding the 3rd fighting platoon beefs up the formation and adds some desperately needed artillery support. The 64″ range of the mortars means that you should always be in range, but should there be no suitable targets then they are cheap enough to go hide somewhere and preserve your formation.

This formation is still a steal but now has some real teeth. AT17 and 2+ FP makes the 106mm recoilless rifle jeeps an extremely effective ambushing unit. They are as vulnerable as the other jeeps but don’t have the security blanket of the Sayur 2+ morale so you may have to accept that the 4 shots that they make might be their only ones but the threat of that alone is enough.

I’ve kept the 4 Skyhawks as I still feel that for their points they do something in the list that nothing else can and even with their 30mm cannons and bombs they can make a mess of support units.

The 120mm are something that I had missed the first time round – no idea why – they are another cheap barrage in the list and gives another deployment of smoke should I need it too. They are the same points as the 25pdrs, and subjectively, the WW2 era guns are better valued in points as they can be used in a direct fire role. I chose to ignore them as I can’t see if they were used in 1973 and therefore don’t really fit my army.

Planning for purchases is actually quite refreshing but there is no real replacement for getting some rubber on the road and actually test things out. I’m not a great Points-on-Paper General and experiencing fighting the Israelis has taught me some lessons that I’ve applied here to playing with them.

I think that I am still missing that M113 fighting platoon – every time I play Lee they are always the biggest thorn in my side – but squeezing that in means dropping almost everything else. Once again, playing on the tabletop will influence the list composition and I’m sure it will evolve again before I’m content with it but for now I think I’m heading in the right direction (towards Sinai or the Golan Heights whichever is your preference)