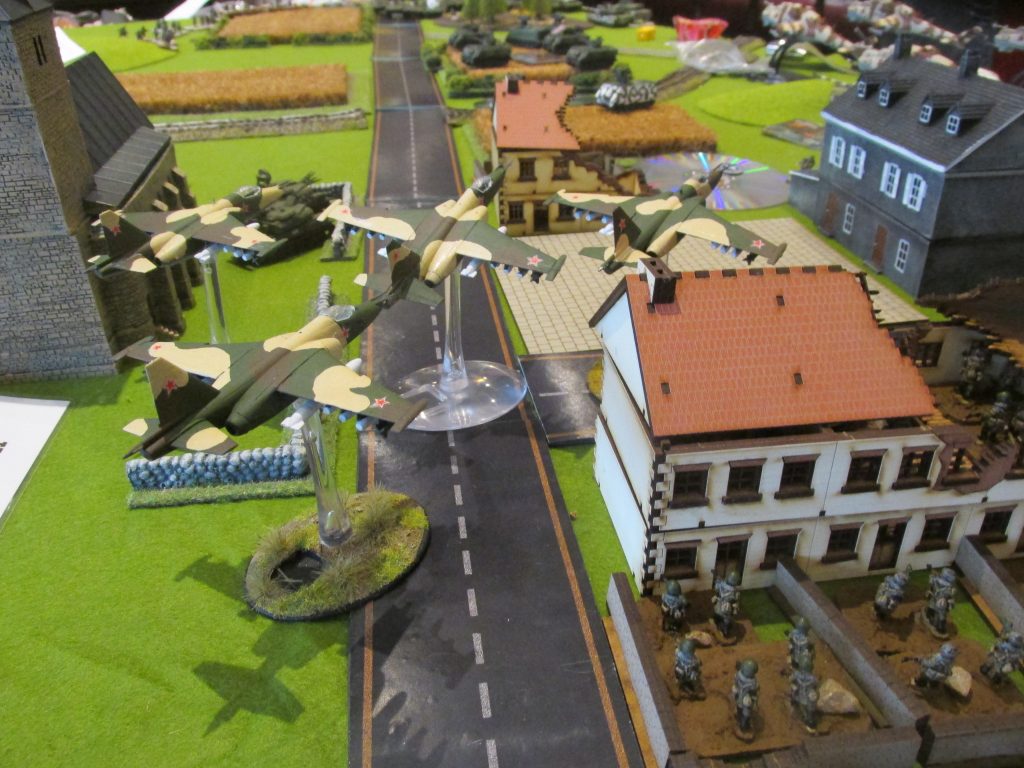 Rumble on the Rhine

Today Rich talks about his experience at a 1 day Team Yankee event.

As a long time v3 player I have to admit to being a little underwhelmed at first by Team Yankee. Up here in Central Scotland there was a mad rush to buy starter packs when the rules were released, but the interest rapidly tailed off, with most people putting the game on the back burner.

I bought the Afgantsy supplement and some excellent figures from ArmiesArmy, but it really wasn’t a popular ruleset, locally. With no opponents, I was on the verge of giving in and e-baying off my stuff, but a few “southern” friends encouraged me to keep going, and as a few of them had arranged a competition within (just about) commutable distance I thought I’d go and see, before I made a final decision.

The Ribble Warriors club based in Preston, on the dark side of the Pennines (that’s Lancashire for non UK readers), took over the AVANTI competition branding when Stafford Games sadly stopped trading in 2016.

On February 19th they hosted a 100 point AVANTI Team Yankee tournament, entitled Rumble on the Rhine. It was a matched tournament so Warsaw Pact players always played NATO players and was based around a NATO counterattack after the Warsaw Pact onslaught had been halted.

The tournament used the expanded missions and battle plan rules available on the Battlefront webpage, but as an additional rule for the day the Soviet players with Afgantsy (which included me) were given the opportunity to always attack.

Jeremy and I have been wargames opponents for nearly 30 years, dating back to my first ever games at Blackpool Wargames Club (now sadly defunct) in the 1980s.  However this is the first time we’ve ever crossed swords in the Battlefront universe.

Jeremy had a two formation army, with one Tank and one Mechanised formation.  I decided to make use of my ability to auto attack and thus forced him to defend. Being hampered by the “deep reserves” rule Jeremy had 1 Tank platoon, 2 lots of ITV’s, his VADS and an infantry platoon on table.

Using the “spearhead” ability of my BMD recce I was able to deploy the Motor Rifle Company to flank his defensive position whilst pinning him frontally with the mass of the Afgantsy infantry, the larger of which I would use to attack the objective I placed on my right, whilst the motor rifles went for the other objective located on my left. Jeremy unfortunately forgot he could ambush with one unit, and as this was my first game I didn’t realise either, otherwise I would have prompted him

On turn one I was able to range artillery in on his VADS, and bail two of them out. But that was about it. In Jeremy’s turn he decided to move his tank platoon to cover his right flank, now being ominously threatened by 10 BMPs and a horde of Motor Riflemen.

On turn two my loitering SU25s failed to turn up whilst the larger Afgantsy pushed ahead toward the right flank objective I opened up on Jeremy’s remaining VADS with my BMPs, BMDs and ground mounted ATGMs, all this deluge of missiles did was kill a further VADS, but Jeremy was able to pass the morale test.

On his turn the Abrams platoon, HQ platoon and ITVs put a nasty dent in the BMPs and reduced my BMD platoon to one vehicle, though I was able to pass my morale test too. Crucially for me Jeremy’s bailed out VADS didn’t remount.

Turn 3 was the turning point, the SU25s arrived and so I also brought on the 8 Hinds from their loitering position. The SU25s destroyed the VADS, and the Hinds carved up his M1 platoon and M1 HQ, the loss of both of these meant the formation was destroyed and I could concentrate on grabbing the objective. Jeremy was unlucky with his reinforcements, which kept turning up amidst a horde of BMP2s and infantry. On the next turn he did manage to dispatch my remaining BMD recce, and took out the ZSU platoon which had got greedy and went after his ITVs, but I was on the objective and so the game ended 5-2 to me.

Another opponent that I’ve known and played against for years, but again a first game with Battlefront rules. Sam had a mixed two formation army with a formation of Tanks and a formation of Infantry.

Again I elected to auto attack to try and grab an objective before Sam’s Chieftains rolled on from reserve and stopped me cold. Fighting Chieftains with infantry is a very different kettle of fish to fighting M1s. The brutal 120mm L11A5 Royal Ordnance gun on the Chieftain means I can’t be quite as gung-ho with my infantry.

Sam deployed minefields to cover the objectives as well as a platoon each of Infantry and Chieftains and the Milan platoon; this meant a lot of infantry and loads of GPMG armed FV432’s all over the battlefield (this is one problem I’m having with the rules, I’m not sure any self respecting FV432 driver would have hung around on the battlefield long enough to give his vehicle commander the chance for a few pops at Ivan with the gimpy!).   My plan was to try and target Sams Tracked Rapiers and then overwhelm him with air.  Here I should point out that I had misunderstood the AA rules and thought AA fired against every air target which attacked, not just once.

I pushed forward with the afgantsy, and recce and tried to get shots against the Rapiers, also trying to bring down artillery on them. Sam, being the annoyingly experienced player that he is, kept them fairly well hidden and when I got shots I couldn’t hit. We traded recce units with me taking down Sams Scorpion platoon whilst he in return wiped out my BMDs (they were wiped out in all 3 games!!)

With us both having big infantry armies to deploy the time limit of 2 hours 30 didn’t give us much time and so as time ran down I did launch the air wave at him and then found out the mistake I’d made in thinking the Rapiers could keep firing. Sam dice were appallingly bad and the Frogfeet and Hinds wiped the platoon out, however in the next turn which ended up being the last the Frogfeet didn’t turn up, and the Hinds couldn’t hit a barn door (or the side armour of a Chieftain) and so the game ended as a 2-1 losing draw to me (we both had 9+ platoons)

Another opponent I’ve played against a few times, although unlike Sam and Jeremy I’ve only known Tim a few years and we’ve only fought over a Flames of War table. Like Sam, Tim had gone for BAOR, but with a two formation mechanised list supported by Lynx, Harriers and the airmobile infantry. This time the competition scenario made me the attacker so I didn’t have to go with the auto attack. However given the size of both our armies, and the already rapidly reducing time available this was always going to be a scenario that would be difficult to play to a finish.

Tim deployed some Spartan MCT and other assorted CVR(T)s on his right, with a strong infantry centre and his right supported by a Chieftain troop, with an infantry platoon in ambush.

I decided to go for it on my right flank, whilst again trying to soften up Tim’s anti-aircraft defending. Tim’s hunter killer helicopters shot off my Shilkas and his Harriers killed my long suffering recce. In return my Motor Rifle BMPs took out a troop of Scorpions loitering in the village in the middle of the table. As time ran down I just concentrated on trying to take platoons and Tim sportingly gave me the chance by getting through his turns quickly, I managed to take out his Rapiers with a massive air wave and then next turn my remaining Hinds ripped through his Chiefains but then time as called a 3-4 defeat for me

The Soviets got a bit of a kicking overall, but I managed to end up as second place Soviet and picked up a box set of Gophers (now traded for some BRDM Spandrels). I can’t say I enjoyed the games as much as I enjoy V3 but the day certainly encouraged me to stay involved and build up my Warsaw Pact forces, and to organise a tournament in Scotland to try and show the ruleset is not as one dimensional as we’d first thought.

If I had one small niggle, the 100 point lists made 3 games too tight a squeeze, so we’re going to run at 85 points for Storm Over Stirling.

Overall though, a great day, and a big thanks to Sam, Ian and Pete of the Rubble Warriors for organising, and for keeping things interesting through the game with spot prizes for “first NATO platoon” or First “WarPac” platoon killed. Dave Adlams Soviets – winners of the best painted armySadly I haven’t been able to get a full final scoresheet, but as a Warsaw Pact player that’s probably no bad thing !!!

And lastly sorry for the lack of photos of any of my games after Round 1 or the awards ceremony – my camera batteries went flat, and my spares were flat too !