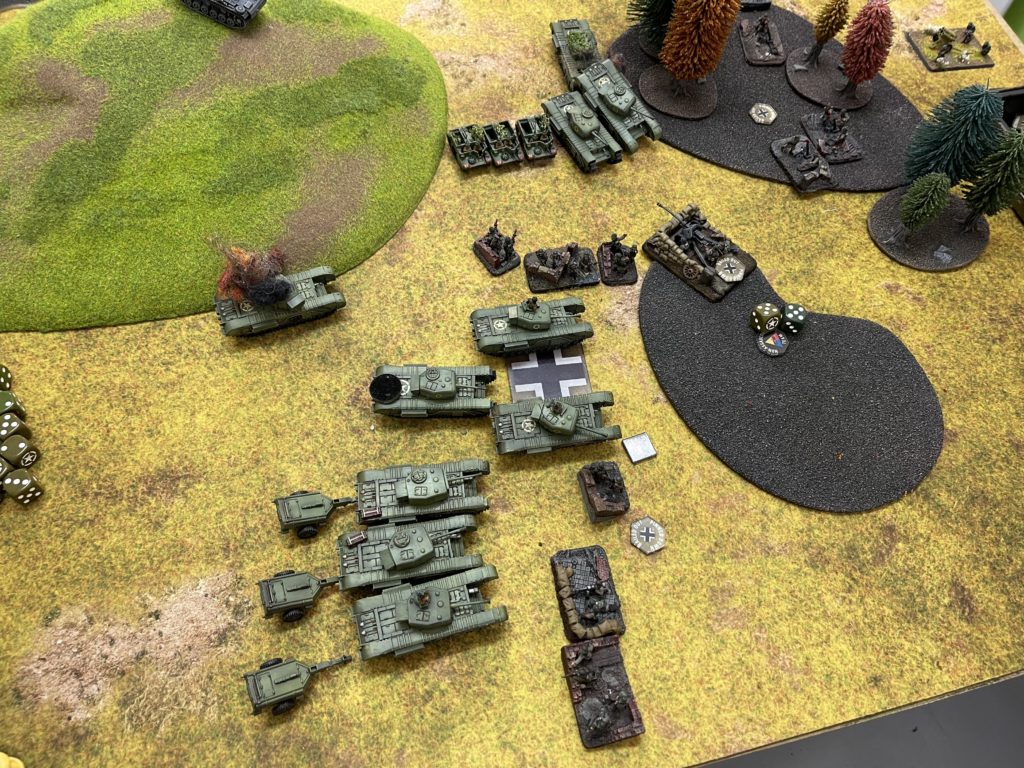 Gameshub is a major FOW stockist in Edinburgh and a regular host of a range of one-day FOW events.  Drawing between 10-14 players, these are really fun days, played in good a good spirit and very welcoming to new players.  Rather than continually playing similar games (eg 100Pt LW), last Saturday saw a 100pt Italy themed event with battles covering the middle part of the Italian campaign, Jul-Aug 44. Gareth the organiser had done a lot of research and presented a set of restrictions to create Italy themed lists using the full range of Late War books.  While Fortress Europe was the lynch pin book, many more formations could be added, but certain non-period units could not.  For example, no M10C and no Firefly.

I have not managed to play FOW much at all due to the demands of newborn twins, therefore I decided to adapt a faithful list to the event requirements.

The first army I faced was a late war German Army using Italian troops as substitutes (part of the rules pack).

We rolled up cornered with my forces on the offensive.  I found that that the escarpments meant that the table diagonal could be almost cut across completely by mines and sheer cliff!  This meant I had to deploy using spearhead, chaining my deployments to get as far around as possible.  This was sub-optimal with some Pak43s sitting on a low rise ready to knock out anything coming at them.  I gradually made my way around with some recce vehicles, although shout out to one Universal Carrier who spent FOUR turns with a ‘cross here’  order, failing to get over a wall.  On the right flank my Crocs came up and burnt away the four stands which they could reach over the minefield.  The StuGs failed to knock out the side armour of my Crocs as they blitzed onto an escarpment and, with a failed shoot and shoot, got reduced to a single hull by the M10s and Churchill fire.  A cheeky assault in the side by some recce rolled up the 10.5cm guns which had proved rather effective at blasting TA0 vehicles.

In the end I had to do something I have never done before and drive Churchills, Crocs and Universal Carriers across minefields.  Surprisingly this only led to a couple of bail,s but allowed me to flame the remaining infantry and assault them off the objective.  The game was won as the valiant CiC was toasted by six flame hits, ouch!

The second game was against an iconic Italy campaign vehicle, the dreaded ‘Elefant’.  SIX Elefants to be exact! They were joined by some AA and infantry.  I did not like the sound of this and knew that the mission that came up would be key.  Luckily I got Fighting Withdrawal meaning he had to come to my guns and all I had to do was hold on.

I chose to deploy away from the objectives, my plan was to force him forward, then ambush my 6pdrs in his side.  My M10s hid in a wood meaning he would have to close to with 6 inchs to shoot, thus allowing me to come out and flank him.  I also planned to remain gone to ground in a wood by the other objective, playing for time with him hitting on 6s.

He come at me with three Elefants on each flank and infantry on the left.  My artillery and armoured cars mowed down the infantry, sending them packing on turn 2.

Now the fight was on.

I tried to bait some Elefants with my Churchill CiC on a ridgeline, however my opponent was too clever to fall for such tricks.  He played the ‘blitz and scoot’ game for a few turns, trying to clear the woods a bit.  My Churchills flanked to the right and, again, crossed a minefield, forcing him to break of his attack on the objective.
On the left he decided to brave a wall and cut around the wood with the M10s in and engage my Crocs. However, his shooting was very poor with only a bail.
My 6pdrs seized the opportunity and ambushed on a hill however they whiffed and bailed only two, who all remounted.

By now it was almost end game, I just had to hang on.  The M10s moved to engage the right flank and the rear of the Elephants still fighting my Churchills, however they achieved nothing.  My 6pdrs got another set of shots (he had tried to present front armour to the scarier M10 threat) and they bailed three.  By some miracle, only one remounted and they promptly fled.  With three Churchills and a a recce platoon gone to ground on the to right flank objective, he called it there.

My final game was versus a beautifully painted Panzergrenadier Company with an urban base theme.  This time I was attacking in Escape.

The Panzergrenadiers deployed a platoon on each objective, with Pak40s in ambush, along with Nebs, HMGs and mortars.  In reserve were Stuka Tank Busters, four StuGs and another platoon of Panzergrenadiers.
I deployed weighted to the right flank, and the simple plan was to stay ranged in on the wood behind the objective where his Pak40s would likely ambush, then advance forward with Crocs and Churchills.  The other flank would have some Universal Carriers threaten the HMGs, Mortars and if possible assault the Nebs.  The second platoon of Churchills would go left to lock down the objective, but swing right to support the main attack when needed.  My guns and M10s deployed facing the back line to deal with the reserves.

The advance started well, and by turn two I had cleared the HMGs from their positions with a cheeky assault, although to the right the defiant Germans seemed to shrug of flame hits every time.  My mortars failed to kill any Pak40s and then got reduced to two stands by the Nebs.  His Stukas harassed my M10s, gradually killing them all as they moved to engage his reserve StuGs.  Eventually I had to go for it and assaulted his pinned Panzergrenadiers on the right flank, forcing them back while dodging a Panzerfaust.  This meant his (very unlucky firepower) Pak40s were now all that was stopping me assaulting my way to victory.  My Crocs advanced and managed to burn three away in a single turn.  As they did this my Carrier platoon assaulted the Nebs but they bravely fought back killing one and causing them to break off.  As the Churhills pushed the depleted infantry back again it was all over with the objective seized.

It was a great day and importantly saw some new players getting to grips with the game.  Thanks to Gareth for making the Italy lists and putting on a great day.  It certainly produced some different lists, and I don’t think I will face 6 Elefants again anytime soon!
Having said that, I think the Axis players all agreed by the end of the day that they were sick of the sight of Churchills.  Every single Allied player had taken them over the 75mm Sherman.

If you are in the Edinburgh area, there is another gaming day in May.  Check out the Gameshub FB page and Discord channel for details.