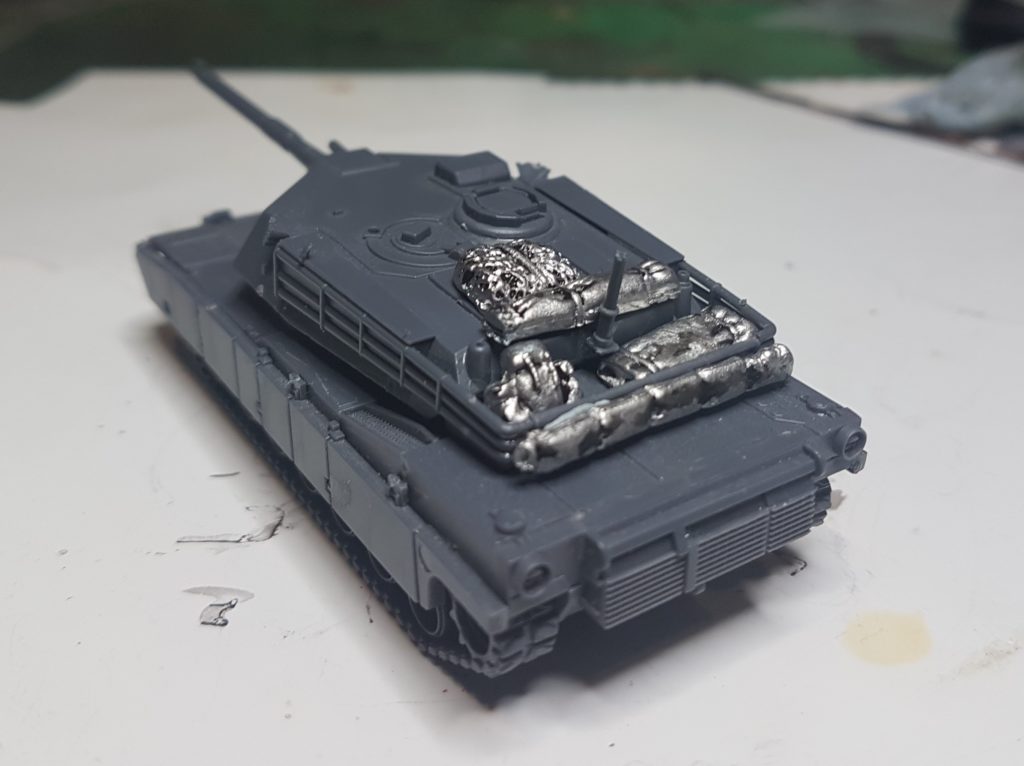 I think by now we have established that I like a good bit of stowage on my tanks, so when I found a bag of stowage bits in the S&S Models review pack, I was more than happy.

The set I received is effectively a taster, almost half of what comes in the 30 item pack.  What I have gives a good sample of camo nets, tarp rolls and miscellaneous items (though I really would have liked some of the duffel bags we can see in the bottom left) Manufacturer’s photo for the 30 item pack

S and S Models describes the set as being suitable for British and US WWII tanks, but I’d argue that the kit works just as well, if not better, for Team Yankee. certainly the Bergans look very contemporary! A grab bag of stowage

The tarp rolls come in a series of useful sizes and configurations, either rolled up as if tied to the rear or side of the AFV, or folded flat for stowage on the roof or a stowage basket.  They each have securing straps cast on and deep creases and look suitable for the part.

The camo nets are similarly a mix of stowage styles, neatly rolled – including a couple banana shaped example as if hanging form a central hook, folded or just heaped.  The camo nets are probably the weaker element of the pack, the texture being a bit rounded and coarse compared to the competing Skytrex examples I normally use, but they are ultimately perfectly usable and the variety of styles is a major plus point, they are just not the reason I would buy the pack.

The miscellaneous items are a mixed bag.  The bergans are suitably bergan shaped and a great boon for fitting out tanks on campaign.  The jerry cans are a little soft edged for my liking, though I did like the one piece “tarp and lashed jerry can” example as a concept.  The “piled stowage” item is a characterful item that could easily find a home on the engine deck of a Sherman/Cromwell or the bustle of an M1 Abrams.

At this point, I could simply rest on my laurels and just content myslef with a shot of the bits layed out, but lets look at their use with some Team Yankee examples. Bed Rolls and a neatly rolled tank sheet and camo net on the blow-out panels.  Still leaves the bustle and racks free for more stowage! The one piece “pile stowage” would probably give the RSM a headache for being untidy but isn’t bad for reflecting a tank in the midst of the campaign and doesn’t look out of place on the bustle. The bergans look good on the racks.  The Jerry Can/Tarp combo had a slight issue where I needed to mount it higher than I’d like due to clashing with the engine deck but it still works.  Desert War examples can lash it to the side somewhat easier! A more heavily loaded example!  The long tarp roll is absolutely perfect for going along the back of the bustle and the long, thin, folded one fits perfectly in the bustle rack with space for bergans, duffel bags, etc.

S&S have two options – a thirty item random grab bag for £8 or a set of 15 bergans for £4.50. On the fact of it, both seem like pretty good value.  Looking at the competitors, the Skytrex General Stowage set retails at £10 and has a huge number of parts, but generally smaller items like small bed rolls, wooden crates and jerry cans.  The former Armiesarmy stowage set at £2.75 is an amazing price for a similar quantity of parts to the S and S offering (plus fabric camo nets), vastly undercutting the normal market price.

That said, I always like mixing up different companies stowage and the S&S price does not put me off.  The convenience of just being able to get bergans on their own is worth it.

Manufacturers photo of the bergans. the one on the right would probably work well for the ALICE pack with its central pocket.

The S&S models stowage set is a useful set to have when populating the tanks for a long campaign.  Whilst some bits are sculpted a bit better than others, I wouldn’t say any one part is unusable nor going to let down the look of the tank and the variety of configurations makes for easy combining of parts to get a specific look.

Ultimately the proof of the pudding with a review is if I would buy it myself and I can happily report that I will be ordering a bergan set and a general set for future use.  I would say that the S and S set should definitely find a place in the avid 15mm tank modellers “stowage bits” drawer!