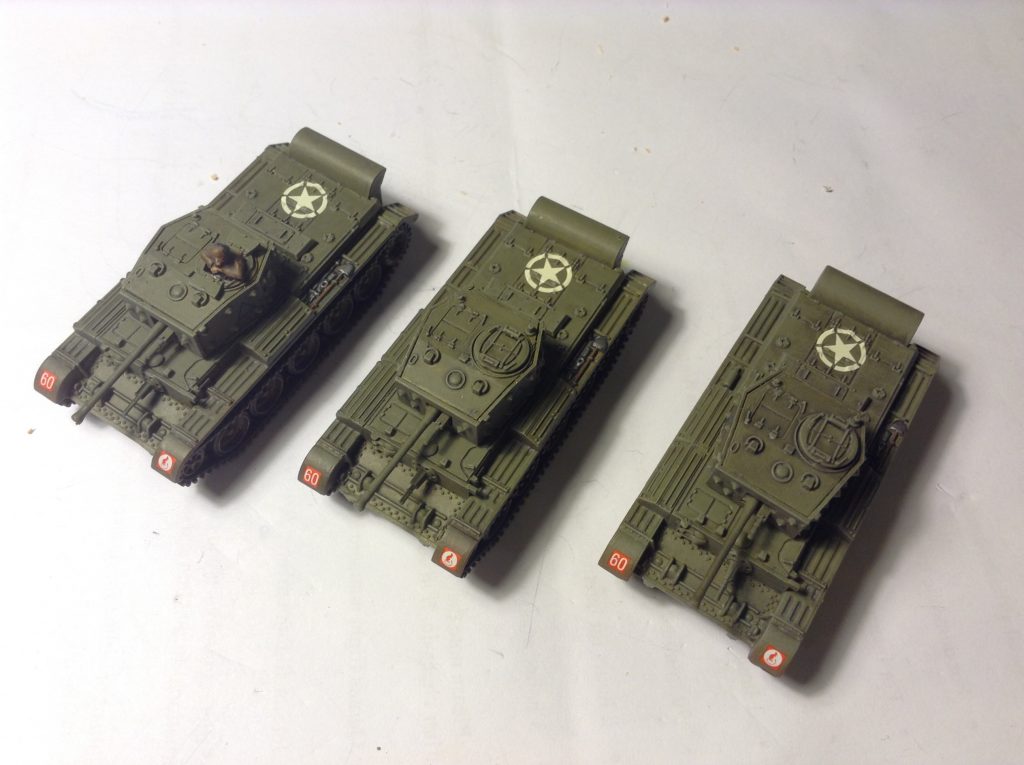 Named after the English Civil War commander, the Cromwell was a British cruiser tank that first saw action in Normandy in 1944.  Equipped with a 600 horse power engine, it was capable of high speeds. The tank was equipped with a 6 pounder, bored out to fire a 75mm round. The 75mm gun was a capable all-round armament which fired the standard US rounds. This provided a superior high explosive round to the standard 6 pounder. A close support 95mm howitzer was also fitted to some models, used primarily for smoke rounds. Cromwell’s were often paired with a Sherman Firefly or challenger for anti-tank purposes.

This box follows the well established Plastic Soldier Company (PSC) pattern. 5 tanks, one per frame, with as many options as possible. I have always wanted a unit of Cromwell tanks and looking at the photos on the PSC site, these seemed to fit the bill. Opening up the box, I wasn’t disappointed.

The kit allows the turret to be fitted with either the 95mm CS or the standard 75mm gun. You can select an open or closed top hatch. You can also choose to fit the hedgerow cutters and exhaust cowling cover. I left off the cutters but used the cowling. Finally, I choose to leave off the mudguards. I found the model to be well detailed. There is lots of detail, clearly represented such as rivets, panel lines and hatches. All the detail was well cast and I had no mould lines or other cleanup to do. All pieces went together well after a dry fit. I was surprised to find no stowage in this pack. Yes, there are the options I listed earlier but some of the usual PSC fare (crates, track etc) would have been a nice addition. Instructions are really an area that PSC could make some improvements. Neither the box or the website contains instructions. The inside of the box contains an inventory list that list the parts but nothing about how the pieces go together. I strongly believe there are two types of people in the world, those that assemble with instructions and those that ignore them and charge ahead. I am in the first camp. For people like me, a solid set of instructions would be nice. Firstly, confession time. I didn’t wash these or otherwise prepare them for painting. I simply clipped them from the frame and glued them together. I know, bad modeler, bad! I did blue-tac the assembled turrets and hulls to bottletops prior to spray priming.

I brushed these guys with 2 light coats of VMC Russian before a strong tone wash. I then used VMC Iraqi Sand in decreasing amounts, mixed with VMC Russian Uniform in bry brush highlights. I painted the road wheels and tracks black before weathering the whole area with a VMC Flat earth dry brush. Unfortunately I couldn’t get a hold of the correct LW decals so I have used MW decals. Yes, I am a bad, bad modeler, but this has already been established.