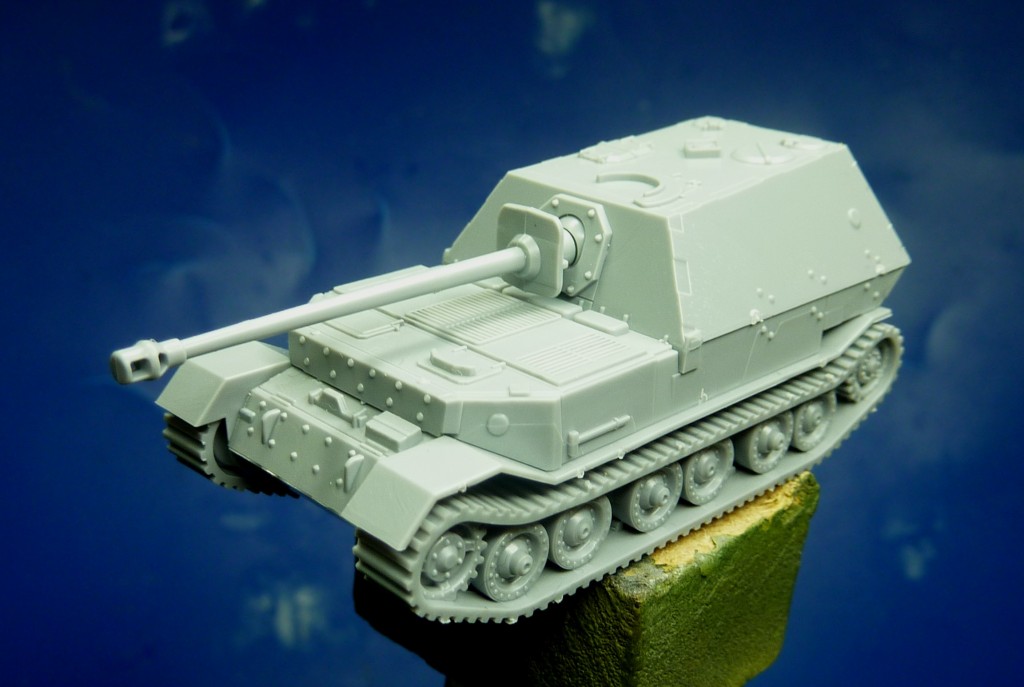 Today, Lee looks at one of the more recent Zvesda plastic 1:100 releases, the Ferdinand tank destroyer.

If you could imagine a long list of things I expected to see in 1:100 WWII plastic, its fair to say the Ferdinand would be in the bottom third of that list.  Plastic manufacturing lends itself to bulk purchases (armies of Shermans or the Tiger 1E that every German player will buy at least two of), not niche products, as the need to recoup the cost of the steel tooling drives the economies.

Still, it feels of late that a lot of things from the bottom of the list (Plastic Soldier Company’s A9/A10 kit, Battlefront’s Pershing) are getting made; even whilst things from the top (King Tiger -apparently Zvesda has one coming, Panzer IV(70), Hetzer, Chaffee!) are being overlooked.  So maybe I *shouldn’t* be surprised that something as flawed, in real life, as the Ferdinand has made it into the plastic world. The Ferdinand is named after its creator, Ferdinand Porsche.  Ferdinand would become better know for the Porsche 911 series of sports cars but, during WWII, he spent most of his effort on tanks, generally large ones.  Porsche designed a competing design for the tank that would become the PzVI Tiger.  His design aimed to make use of an electro-drive transmission – the engine supplying power to individual electric motors that drove the wheels, rather than using a gear box to transmit the power via drive shaft.  On paper it has some benefits (lots of torque, for one), but Germany was already starting to feel the pinch on the materials needed to make the electrical motors and the design proved unreliable.

The Porsche design lost out for the main contract, but an order was placed for a couple company of the Tiger (P) as it was felt that these would fair better in the North Africa campaign due to their air cooled engines.  The drive train issues would continue and the Tiger P would never see service in North Africa (a couple did kick around as command vehicles on the Eastern Front though).  The Germans were suddenly left with a bunch of hulls and nothing to do with them.

In true German fashion, a large gun was stuck on the chassis and a heavily armoured superstructure (equal to the King Tiger) was mounted to enclose the crew.  The Germans called it good and sent it to Kursk as the Ferdinand Tank Destroyer – which turned into a disaster.  Whilst the Ferdinand could kill any Russian tank it faced with its long 88mm main gun; and shrug off any hit fired in return from the front; it still suffered from mechanical unreliability, lacked any defence against infantry, and had poor visibility.  A bad combination when facing an army with fearless, bomb and flamethrower wielding pioneers.

The surviving Ferdinands were sent back to Germany where they received a hull MG, elevated cupola and a coat of Zimmerit.  The reworked tanks were dubbed Elefant and then sent to the theatre that least suited them – Italy. The combat history ends with the Elefant in the ruins of Berlin, a pair of them dying with the regime that birthed them.

As is common with the simpler Zvesda models, the box contains just the model, in this case on two sprues, with the instructions on the back of the box.  One sprue has all the parts for the lower hull whilst the other holds the superstructure and the fearsome long 88mm. I was expecting a more complex kit but, in retrospect, the Elephant is not exactly the most complex vehicle in the world when it comes to its lines.  None the less, I was sceptical on what the final model would look like and set my expectations to an A-13 low.

The lower hull and tracks interface by a pair of adaptors that mate the tracks to the hull.  The join is a little spongy and the odd tapering shape of the rear of the Elephant makes it look like the tracks are splayed out when in fact they are parallel.  Bit of an optical illusion! Attention now turns to the upper hull and superstructure.  The gun is a two part arrangement, joined by a single piece superstructure and a front plate that allows the model to have the distinctive riveted appearance without suffering the normal Zvesda vertical detail shortfall The assembled gun looks like it should give a degree of lateral movement on its pivot on the upper hull, but the box superstructure prevents it from pivoting at all and, if not aligned fully, can prevent the superstructure from pushing fully home.  A little adjustment resolves that.

All in all, assembly took a mere ten minutes and I didn’t use glue.  I’m inclined to remove the tracks and apply a little cement where they join the adaptors and then run some along the join between superstructure and upper hull just to act as a bit of gap filling, but it feels like it is hardly necessary.

Fully assembled, its an impressive model.  By the standards of a Zvesda kit is is excellently detailed.  The access hatch at the rear is maybe a little lacking (no hinges) and there’s the occasional missing bit of detail, but its not the wholesale blank side issue that most Zvesda kits have.  Honestly, I was really impressed with what the model brings to the party. The track join to the hull could be stronger as it looks a little saggy.  The only real criticism is that the driver vision block and jack (it is a jack isn’t it?) could be a touch more detailed.

No real complaints from the side.  Some tow lines which seem fairly common on the side of the lower hull would have been welcome but their absence is no great issue.

The rear hatch, and the circular plate it sits in, is a little weak on relief, a typical Zvesda issue, and lacks the hinges (although that may be more of an Elefant thing) but otherwise all the rivets and bumps seem present and correct

Its difficult to find a top shot of a Ferdinand but it all looks correct from what I can tell.  A marching barrel mount, folded down, would have been nice but not a deal breaker. The only real shortcoming is that the model is a pre-Kursk version with no cupola or hull MG but plastic kits make that easy to fix.

Well, its Zvesda so its what would have once been called “pocket money” prices – £2.99 for the kit, before the typical 10% discount.  At 130pts/£ (midwar) I wonder if that is the best bang for buck in a model ever!  A whole (and very impractical) Fortress Italy (late war) 1500pt Schwerejaegerkompanie of 5 Ferdinands (Hq, 2iC and three platoons of one Ferdinand) comes in at a mere £15!

The Battlefront model (sadly I didn’t get a chance to take comparison photos with one of my friends examples) is very nice, and obviously can be purchased in the later Elefant version with no conversion work needed; but at £9 a pop the “bang for your buck” battle is skewed so heavily to Zvesda this time it’s not funny.  The Ferdinand is that rare Zvesda kit, like the M3 Lee, punches well above the normal cheap and cheerful standard.  Short of PSC or BF doing a plastic kit with better detail (a high bar, but not insurmountable) I really would struggle *not* to recommend this great kit.  Zvesda, take note and give us more of this quality please!