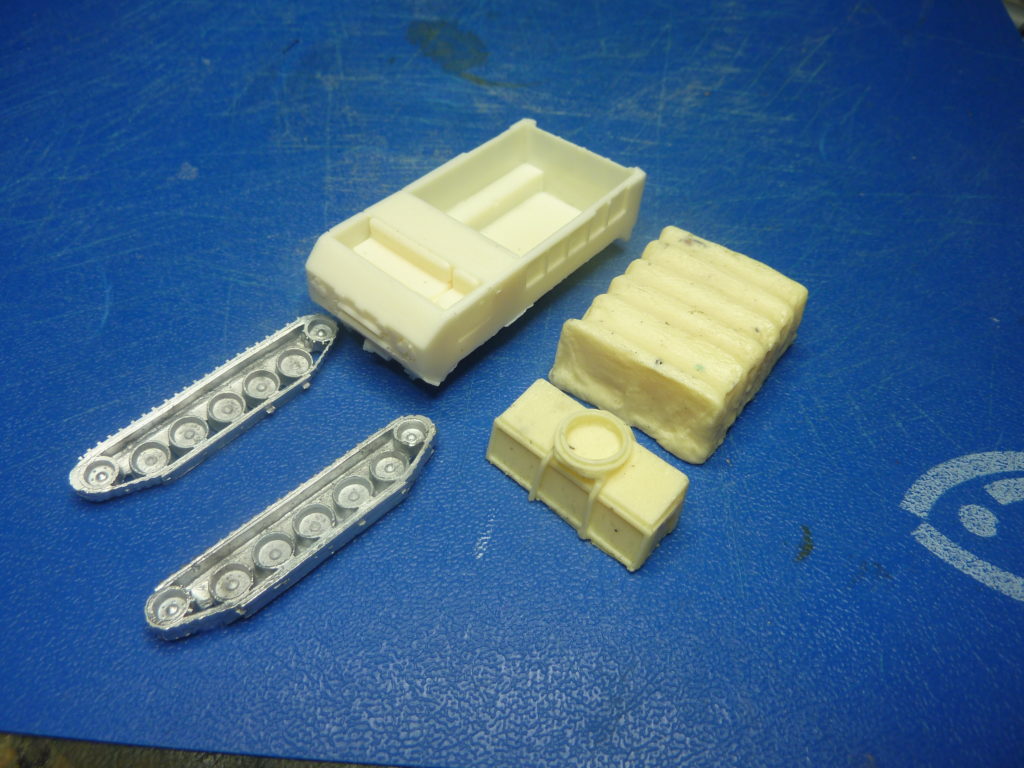 S & S Models, a 20mm manufacturer making the move into 15mm via conversion kits (such as the T-55 engineering vehicle) sent a care package for us to review.  The biggest item to roll out of the jiffy bag was a kit of parts for an M548 Cargo Hauler, S&S Models first venture into making full models in 15mm.  Lets take a look at this handy boon to logistics.

The M548 is an all-terrain cargo carrier based on the M113 drive train and lower hull.  In place of an armoured fighting and passenger compartment, spacious but unarmoured driving and cargo compartments were mounted, separated by the mid hull engine.  This provides plenty of space for the transport of cargo and the like whilst the driving compartment can seat four.  The passenger compartment can also be fitted with a self-supported pedestal for an AA MG that can be accessed by a hatch in the roof. The model is of resin and metal construction with a relatively low part count.  The major parts are: A notable absence was the lack of any mud guards for the tracks, or an AA MG.  However, both parts will no doubt be available in the bits box (certainly I have enough spare 0.5 and 7.62 AA MG and M113 mud guards to fit out a small fleet!) and there are more than enough photos of M548 without either to excuse the absence. The parts were generally cleanly cast, though there were a few flash lines around the track recesses on the lower hull that needed cleaning (one can still be seen in the photos below).  I also noticed that the front horizontal bars, used to mount spare track, were missing their ends although I can’t tell if that is a mis-cast or just unfortunate chipping in transit.  I did find that the flat bottoms of the two resin compartments were not as flat as one might expect, the fit of the canvas tilt being less than satisfactory for getting a clean bond to the lower hull.  Even after some filing I found that I still had some high points that was leaving a few gaps between the two parts, though largely hidden unless held up to the light.  The canvas tilt parts do have an interesting texture to them that may benefit dry-brushing the tilt when it comes to painting.

The gun ring is moulded into the tilt which makes for a bit of infill.  For a “background piece” like this I guess that is preferable to an otherwise fiddly assembly of the elevated gun ring. I would probably suggest to the manufacturer that they consider having more of a stepped plug (so contact face then step down fit in the compartment) to help with location and gap hiding for the two resin uppers.  The tracks could also benefit from some locating tabs to help alignment.  Otherwise, assembly was straight forward.

Detail is generally good although there are some omissions. The engine deck (between the two cabs) was missing its various vents and vertical exhausts, probably because its not hugely visible with the tilt installed.  The side of the hull had door and filler cap detail but was missing the access steps to the cab (should be below the door). The light cluster at the front could probably be a bit more recessed into the circular cut-out but that may be a casting limitation more than anything.

Of note, the cargo bay does have some interior detail such as the bench sides and engine access panels which was a pleasant surprise and useful if you want to model the carrier with the tilt off.
Other than that, the major features were present and I noted that this model is depicted with the front winch present.

Size wise, when I took it out the jiffy bag, I thought the model was over-size compared to its near siblings (Tracked Rapier and M113) but they really are that big!  The actual track length is a pretty good match for a BF M113 suggesting that all is as it should be. The M548 does not have a role to play in the game outside of special scenarios such as rear area attacks or anti-convoy operations. For such missions, I would suggest that the stats should be much as a M113 for mobility, unarmoured (5+ save rather than armour rating), and skill and morale much as per a similar transport in the respective force.  If armed, it should be a .50 for the US or a 7.62mm type for other NATO forces, mimicking that country’s APC.

Otherwise, the M548 serves the purpose as a nice objective diorama.  I plan to use mine as an objective stand-in should a British Rapier unit be deployed contesting an objective.  It would also not be out of place in the ‘Nam game either – have a few in the next fire-base attack mission as scatter terrain.

The model costs is yet to be confirmed but the manufacturer expects it to be about £5.50.  For a piece that’s use is limited to scenarios, objectives and dioramas that is fairly reasonable.  A quick search of Skytrex and QRF revealed no M548 in their ranges and showed that S&S are somewhat unique in offering the cargo hauler.

Whilst logistic support is perhaps difficult for all but the most committed wargamer to get excited about, the M548 model by S&S is a useful piece for those who like filling out their baggage train or creating scenic objective markers.  Its relatively low price makes it a fairly guilt free purchase for a, normally, non-playable model and the quality of the piece is suitable for the task.  Whilst there is room for improvement, its a good first step for S&S as an all-up model manufacturer in 15mm, building on their conversion kits.