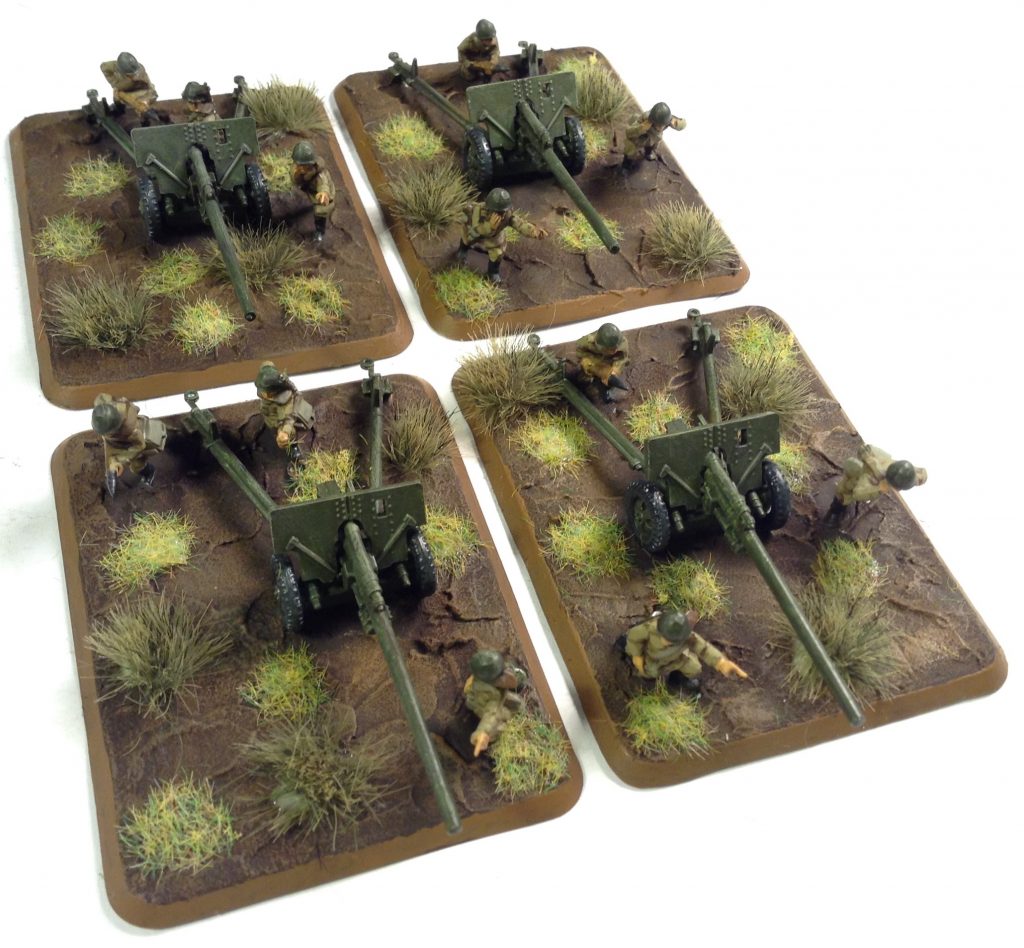 Today Comrade Collins adds another unit to his IS2 Company and reviews the Battlefront Soviet ZiS2 Anti-Tank gun.

In 1940, the Soviet Union decided a new anti-tank gun was required to counter expected heavier German tanks. The engineers and developers responded with a new high velocity 57mm gun which was expected to fire a projectile capable of 90mm of armour penetration. This new gun was the 57mm Anti-Tank Gun 1941 (ZiS 2).

Production began in June 1941 but was halted after 371 guns were produced as in the field the shells would penetrate German Panzers with little internal damage. Instead factories manufactured ZiS 3 76mm pieces. This was a simple change as the 2 guns shared the same gun carriage and gun shield. The appearance of the German big cats (Tigers and Panther) quickly lead to a reversal in this decision and the ZiS 2 went back into production as the 57mm anti-tank gun model 1943. Nearly 10, 000 units were produced before wars end in 1945.

The gun was semi-automatic in that the gun breech closed automatically when the gun fired and opened again automatically after firing, discharging the spent shell casing. This meant the loaders simply needed to insert a new round. The guns were also light and capable of being towed at fast speeds making them an effective battlefield anti-tank gun.

Firstly the stats. These are ‘medium’ guns, with AT 11, ROF 3, firepower 4 and range 32 inches. Technically they could be on medium bases but the gun looks too large so I went with the large bases provided.

Being medium guns, the ZIS 2 is concealed when dug in. This means it doesn’t need to be placed in terrain to be concealed – as larger guns do. It also suffers no disadvantages ambushing unlike heavy or immobile guns. With “roll up the guns”, they can move 6 inches without being limbered.

In firepower terms, these are on-par with the late 6lb guns and a touch below the PaK40 with an AT of 12. However the ROF 3 goes someway to making up for this. Having 4 in a unit means it can put out 12 dice of AT11.

A disadvantage is the firepower rating of 4+. It will fail firepower tests 50% of the time. Being a Soviet gun, it enjoys the volley fire rule meaning that when stationary, it can reroll misses at close range, somewhat mitigating this through sheer volume of fire!

Overall, I think the ZiS 2 is a good all round gun for taking on medium tanks. It won’t take down heavy tanks but then, that is not their job.

The box set (SBX31) provides a spotter, command stand, staff team, 24 crew and 4 guns. Each gun can be built as either a ZiS 2 or a ZiS 3 gun. The box also comes with all the required recessed bases – 4 large bases, 1 medium base and 2 small bases. For modelling enthusiasts, each gun frame comes with a staff table and some ammo boxes.

The staff team and spotter are only need for the bombard-capable ZiS 3. These figures look like they will be very useful on an objective.

The box allows for a good variety of crew so that each gun doesn’t look the same. In addition, the large bases have the recesses placed differently on the base to allow for further diversity. The assembly was straight forward. The trail is in one piece so you just need to glue the gun and then the gun shield in place.

I haven’t painted a lot of plastic figures but I don’t think these plastic crew figures are as nice as the metal figures from Battlefront. There appear to be some compromises. For example where the guns meet helmets and where guns meet uniforms. The 2 items seems to flow into each other rather than being distinct, clearly defined parts. This is a minor quibble and more a response to the excellent metal figures from Battlefront than an issue with the plastics. The same cannot be said for the guns, which are top rate. They are highly detailed, easy to assemble and most importantly quite robust. I think these are way ahead of the metal counterparts.

I used a variety of different poses and placed 3 crew on each base. Given the size of the base, I glued in the crew, applied the basing filler and glued down the guns before I started painting. This lead to a few awkward painting challenges so I will probably paint them separately next time.

Overall, they painted up really well and I am very, very pleased with these guys. Roll the photos….