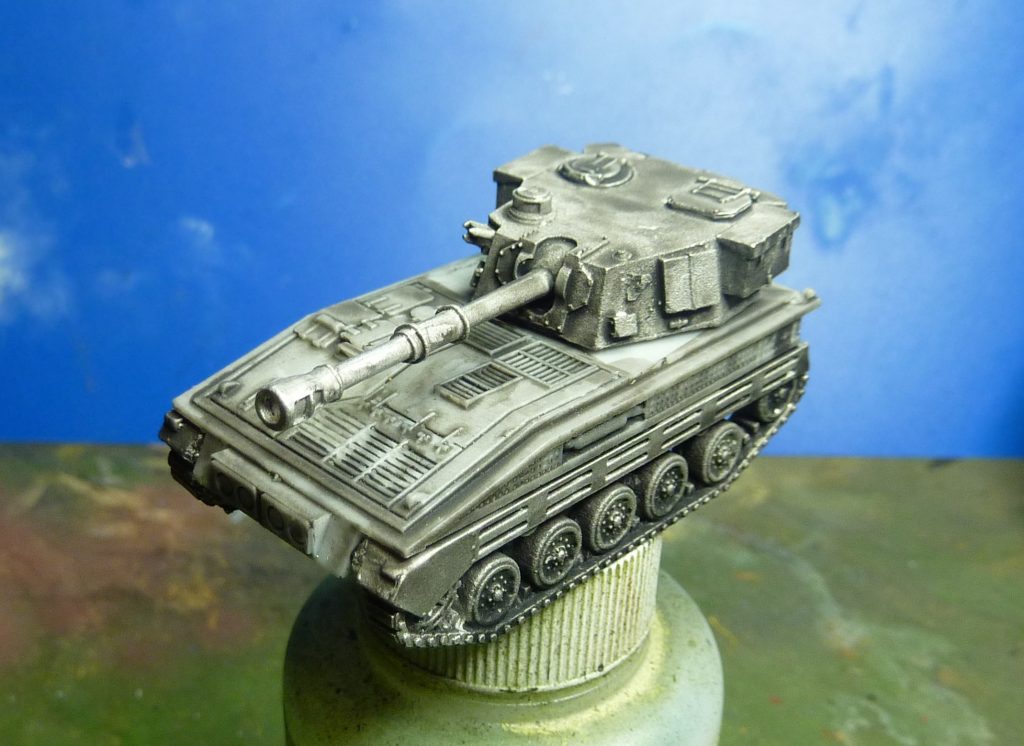 ArmiesArmy is a fairly new supplier of Cold War 15mm miniatures but has wasted no time in establishing a large range of models for Soviet Airborne and the British Army off the back of one successful Kickstarter and with a “kick-off” to cover Canadian forces already at 50% backed at the time of writing.
ArmiesArmy sent me a few pieces for review so today we shall look at the first, the Abbot self-propelled gun.

The FV433 Abbot (continuing the WWII habit of naming SPG after ecclesiastical ranks) was the principal Self-propelled Gun of the British Army from the late 60’s to the mid-nineties. It was born out of a need to produce a SP Gun that complied with NATO standardisation on 105mm artillery pieces, replacing the 25pdr that was still serving as the main artillery piece of the British Army.

The Abbot combined the powerplant, running gear and rough dimensions of the FV430 family of vehicles (including the FV432 previously covered) with a newly designed L13 105mm gun and family of ammunition and electrically primed bag charges – 40 rounds being the typical load. In addition to High explosive, Smoke and Illumination rounds, the Abbott could also for a 105mm HESH round, providing a useful direct fire anti-tank capability – no doubt a lesson carried over from the 25pdr’s anti-tank role in the 1940’s desert operations. If you go fast enough you don’t need smoke rounds…

In the Team Yankee time-frame, the Abbot was still the main SP gun of the British Army, supported by heavier pieces such as US built M-109 155mm SP Howitzers. Whilst being a relatively light 105mm artillery piece, the shell was still sufficient for suppressing the enemy (as befits British doctrine) whilst packing a decent punch. This makes it the second best Abbot of the 1980’s

The Abbot served well but was never used operationally by either the UK or the other main customer, India. It was eventually replaced by the 155mm AS-90 self propelled gun but the Abbott proved a favourite in the civilian market for tank driving experiences and the like. The kit comes in a few major parts – tracks (with integral mudguards), hull, then the turret assembly consisting of the turret itself, M13A1 105mm gun, open and closed commander cupola versions and the loaders hatch.  It was good to see the separate loaders hatch – I’m not sure if I’d use it open but its nice to have the option.  There was also a pair of crew figures and a length of camo netting which is a welcome addition!  The only thing I’d note is that there is no AA MG but given they last seconds in a figure case anyway I’m not entirely fussed.

The hull is the only resin component, being made of a resin that feels lighter than the dark grey resin Battlefront uses.  It reminded me of the Skytrex SA-13 hulls I previously reviewed.  The detail seemed sharp so no real complaints on this, just an observation.

The turret is solid white metal which makes for a very top heavy model.  It had a mould line most noticeable on the rear of the turret, slightly disfiguring the rear hatch.  Nothing a file won’t fix and other than that the casting was very sharp, especially the tracks.

A minor quibble was the smoke dispenser on the left was absent and the open cupola was mis-moulded.  Keith at ArmiesArmy offered to send replacements which was what I like to hear. Assembly was straightforward enough.  I didn’t realise it at the time but the commander’s cupola dropped flush which apparently its not meant to do.  The real life examples and the examples on the ArmiesArmy website have it sitting a bit proud.  I’d recommend doing a dry fit and maybe putting a sprue offcut in the base to set the height if it does full flush before you glue.

A minor point of dissatisfaction is that the gun can only be glued in one position (to be fair, I can level that at most manufacturers), seems vulnerable to breaking and it lays the gun a bit flat.  The example on the site has it steeper but its not how the barrel was sitting naturally. Probably just a case of playing around with it to get the desired angle but I’d recommend pinning the barrel to the turret at any rate to make it figure case friendly.

Total assembly time was about ten minutes.  Subsequent models would no doubt be even quicker. Note – the light resin and white metal was causing a lot of glare so I applied a coat of black wash to aid photography from this point forward.

Time for our walkaround (a somewhat neglected real world walkabout can be found here).  Sadly nobody in Brighton has the Battlefront example – the obvious nearest competitor –  so I can’t do much of a comparison beyond looking at their website. From the front, the drivers periscope, driving lights, gunners sight and other details are all well captured.  The left track has a slightly misaligned casting which is detracts a little from the otherwise pretty sharp track castings . Side on and the exhaust muffler is visible as it should be.  The grilling is present in the forward wedge which is not the case in real life that I can see – it should be open.  The rear of the exhaust ends abruptly rather than curving up – that might be a concession to manufacturability as otherwise it’d be a fairly weak part of the model so can’t fault it too hard but the Battlefront example does get this minor detail correct (at least in the photos).

The turret captures the various smoke grenade and stowage bins (oddly the Abbot appears to have had a large canvas side bin on each side which is captured here) and even the extinguisher is present which is nice to see!  The muzzle break and fume extractor of the 105mm is well captured. From the top we can see the engine deck, fuel cap (aww, no embossed “fuel” – okay, maybe a bit much at 15mm!  :D)  and drivers hatches are well captured.  The wash picks the detail out well.  The gun cradle that should be sitting on the engine deck is absent which, given its pretty prominent in real life, is a somewhat odd omission given the rest of the detail.

On the turret, the rivets on the mantle come out very well as can be seem and the gunners sight is well captured, along with the detail of the loaders hatch. From the rear, the turret suffers a little from the mould line obscuring the rear turret hatch and the detail is softer than the top and sides.  The NBC pack is a little under-detailed and the communication reel almost entirely absent, a small shame given how well the rest of the kit captures the Abbot.  On the plus side, the hull detail is good with driving lights present (the BF model neglects them) and the rear hatch well realised. Its hard to show it on a photo but the turret is a very loose fit into the locating socket on the hull.  It was possible to move it backwards and forwards by about two millimetre or so, the same laterally.  Most tanks will have a loose turret fit – not exactly aerospace tolerances, but it seemed noticeably excessive.  I went to my West German M-109G Howitzers (BF examples) and the turrets were pretty snug in the hulls so its probably not me being unreasonable on the fit here.  I’ll use magnets to centre the turret in the short term.

All in all the kit compares very well with the BF competitor.  For the most part it captures detail, especially in the front arc, just as well as the BF example but is slightly let down in the rear arc on the turret and exhaust.  I suspect most people will not notice the detail differences in those respects and, as a treadhead, I’ll admit to them being minor points of order.  It should be noted that the Armies Army models tend to be larger than their BF counterparts so you may want to be wary of mixing themwith BF Abbots or FV432 as the size difference will be raedily apparent.

The Abbot, despite the smaller size of its 105mm does a fairly good job matching the 155mm M109 in game, despite being near half the points (4 Abbots for 6pts versus 10pts for 4 M109). Like the M109 it brings smoke bombardments and AT4 HE bombardments to the party, but has a shorter range (88”, 8” less than the M109) and half the indirect firepower at 4+.
Given artillery is going to be mostly smoking or suppressing ATGW/infantry, these shortfalls do little to detract from the Abbot, making it more attractive than the M109 – plus its more British! The real competition comes from the L16 81mm mortar. The Abbot ends up as 3 times the points whilst matching the 81mm for firepower (somewhat oddly) and smoke, surpassing it only in range (beating the 56” mortar range handily – but at little benefit on the standard 6×4 board) and AT. They are also both equally British! Dilemma! The real differentiation will be in the role the player intends – the Mortar won’t be killing massed BMP any time soon whilst the Abbot can do that quite happily. However, 8 81mm can be had for less points than 4 Abbots – making suppression more likely through the extra to-hit bonus.

Perhaps the better case may be for having 4 of both though, covering all bases and lending even more smoke to fox the Saggers and Spam-drels!

Whilst ArmiesArmy may struggle to beat the price of the Battlefront plastics (such as the FV42 or Chieftain), the traditional resin affairs are a much fairer comparison.  The Battlefront pack comes in at £33 for four, before the normal online 10% discount.  Now, that does include the unit card  and decals but lacks the camo netting that comes with the ArmiesArmy model.  All in all, the price favours the ArmiesArmy offering and, as noted the quality is close enough to make it a serious consideration.

The only other competitor with an example is QRF at £6.50 but, as usual for QRF, the small photo on the site offers few clues to quality.

All in all, this is a solid offering from ArmiesArmy that has a few niggling issues with fit due to its metal turret and, if I’m being fussy (which I will be, for fairness) has a few missing or under-defined details that the Battlefront model captures better (NBC pack, exhaust, communications reel).  That said, the ArmiesArmy one does capture some bits the BF example misses (rear driving lights, etc)!

All in all, its about 80% cheaper than the Battlefront offering but about 90%+ of the model which I’d say is a fairly good trade off.  Certainly if you plan to go for a full 8 gun battery then you won’t go far wrong with the ArmiesArmy offering.

I’m not sure if Abbots will feature in my army at the moment, but if they do then they’ll likely be ArmiesArmy ones and that becomes a certainty if the turret ever gets remastered (with a slightly better NBC pack and reel) in resin.