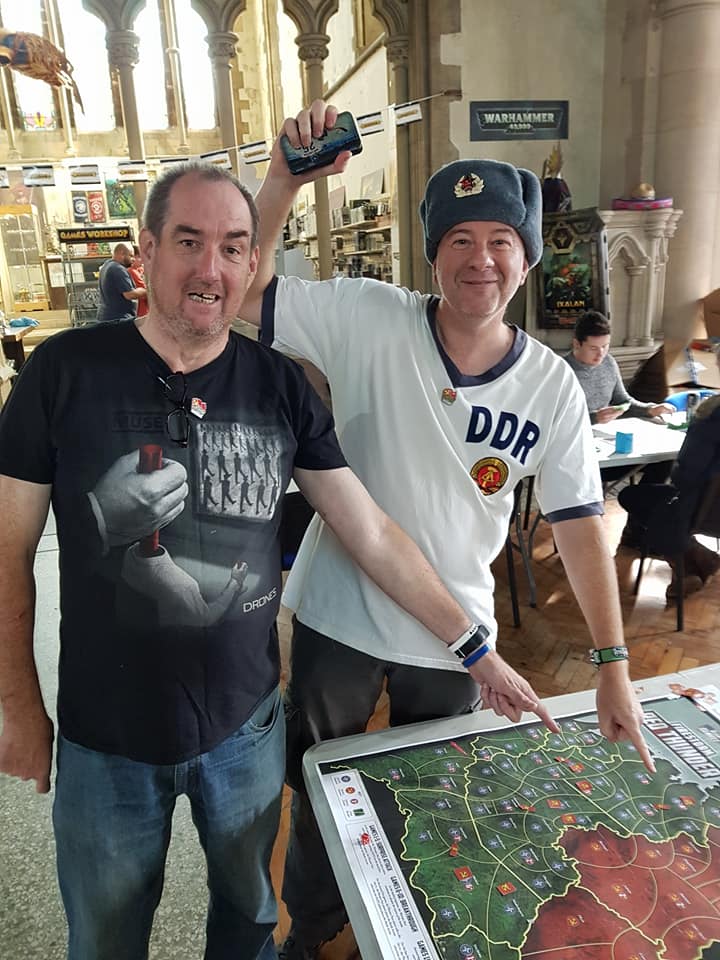 Battlefront supplied us with a Firestorm event pack to run a Firestorm Campaign weekend at the Sanctuary Gaming Centre.  The Firestorm pack was looked at in depth here and this was our chance to try it out.

We were a bit lower on player numbers than we would have liked, as we went from 16 to 8 in the final run up due to a variety of reasons.  However the smaller numbers actually made the map more manageable and produced some interesting Firestorm results.

NATO initially set up a mixed, mobile and static defence.  NATO succeeded in winning on 2 fronts but failed to push WARPAC forces back.  However the WARPAC forces did find a gap to exploit on the Northern flank punching through and taking Hamburg. The WARPAC advance to the South Blunted again but a NATO counter attack into the Northern breakthrough also failed.  While distracted, the WARPAC punched through the centre of the NATO lines threatening the Ruhr valley. WARPAC forces continued their momentum gaining the initiative in all conflict zones.  Again the northern battle reached a bloody stalemate, along with the Southern Flank.  However the centre WARPAC breakthrough lengthened and now threatened Eastern Belgium.  It was becoming obvious to NATO command that the advance was aiming to seize Amsterdam and its port facilities. Soviet Forces assault a well entrenched British position in a bloody street battle, however the battle grinds to another stalemate.

A new day begun with the WARPAC forces again getting the initiaive in all areas with an aggressive dawn attack.  Finally the Southern flank gave ground although the British lines in the North continued to hold.  However the US sector continued to crumble and they fought a fighting retreat back to Arnhem.

Would history repeat itself? German forces from both sides of the Border fight in a small village outside Munich.

With both sides mustering their forces for a final attack NATO managed to counter attack out of Arnhem and push the WARPAC away from the outshirts of Amsterdam, halting their advance for now.  Progress was made to the South with a NATO counter attack also recapturing Munich.

While it could have been worse with NATO realising the WARPAC had achieved a close Operational victory, NATO knew that the Soviets were running out of steam and that the Reforger units would soon arrive along with the Reforger reinforcements.  One thing was for sure, a lot of fighting is still to come. The forces mass for a final thrust.

A big thank you to all the players and a shout out to Phil the newest member of the event who had his first games that weekend bravely borrowing my West German Forces.

Also a big thank you to BF, Armies Army, Skytrex, 4Ground and Total Systems Scenics for their excellent and generous prize support. The Generals for both sides plot their strategy.