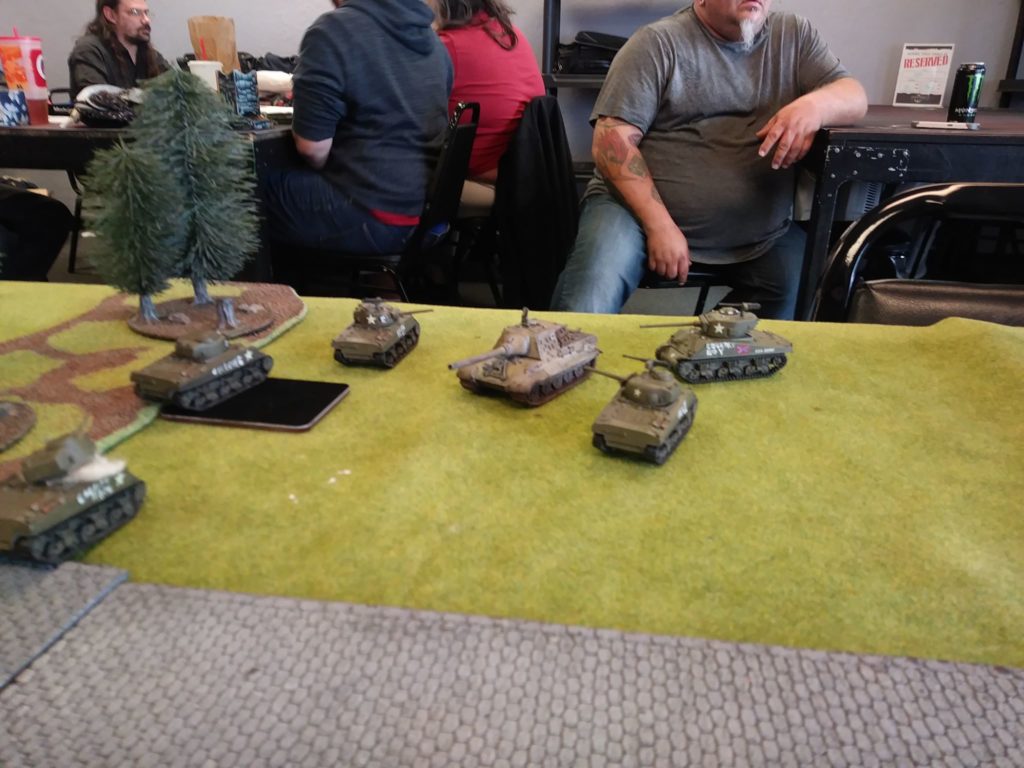 Today guest writer Alex Montalvo gives us some real life examples of tactics based on his time in the US Army for use in your games of FOW.

Flames of War, the “Game of World War II”, is exactly that. A Game. Set in the violent years of 1939-1945, it is the hobby we have all come to know and love. However, since starting the game in 2014, I have heard many players on a losing streak or just down on their luck say that they can’t beat things, or that this force can’t beat that force due to better tanks, skill, or whatever. For example, as a dedicated US Armor player, I have had quite a few German players scoff at my Shermans. And why not? They’re “just” Shermans, no match for the Big Kitties. Imagine the look when I overran their objective by the bottom of Turn 3, or bludgeoned a force of 9 Panthers down to 1, or broke a force of 6 Guards IS-2s at the 2018 Las Vegas Open. I actually earned a name for it: the “Sherman Whisperer” from someone online who was honestly surprised I was able to do such things.

So, how do I pull this off?

Well, due to my Army training, I have learned to look at the game differently. Believe it or not, real world principles DO work in Flames of War! It is the intent of this article to share some of the principles and tactics that I’ve learned in the Army that work in-game. I will frame it in the context of US Armor as that is the force I play, but these principles can apply to any force of any nationality.

Intelligence Preparation of the Battlefield (IPB) –  Know Your Battlespace.

IPB is a military term that has to do with analyzing the terrain in your Area of Operations (AO). Where is the enemy likely to be? What terrain helps you? What terrain hinders you? Knowing this information will help you place your forces to the best advantage to you (and, inversely, put your opponent off his game). Simply put, games of Flames of War can be won (or lost) on deployment.

As a Sherman player, I ALWAYS take the side of the table with the most terrain to hide behind, offense or defense. The truth is Shermans, a lot of times, are outgunned, you need to maximize their survivability. This incorporates IPB as well as the principle of utilizing Cover and Concealment.
What this means to you is always be looking at the table.
Understand the mission, and how best to incorporate the available terrain.

Now, yes, there is such a thing as a “bad” table. I had one game on a wide open winter table. Not much you can do against big guns on an open table. That being said, remember, it’s up to the players to agree on a table set up. As that process happens, be constantly thinking in your mind how you’re going to incorporate it into your battle plan. Know your mission, know your terrain, and understand the best way for your force to utilize it and you will be successful.

Fire and Maneuver – aka Violence of Action (or “Smash Mouth Tactics”)

Fire and Maneuver is the bedrock principle of all combat US Army units. According to Field Manual 7-8 the purpose of the infantry (which I am) is to “close with and destroy the enemy by utilization of maneuver and fires”. This is also understood as “violence of action” in the Army. Bottom line, in the words of General Patton, “we are going to grab him by the nose and kick him in the**!”
What this means to the flames player, especially in the offense, is you need to get up in the opponent’s business. Sitting back does not help you, and if you’re playing Shermans against German or Soviet Heavies or British Semi Indirect, its suicide.
However, the Sherman REALLY shines on this principle. Take a look at the V4 movement rules. Veteran Shermans pass on a 3+ to Blitz.  This gives 4” to the 10” Tactical move for a 14” move. While all tanks can theoretically use this, where the Sherman shines is the use of stabilizers. A full 5 Tank platoon slinging 10 shots after moving 14” is nothing to sneeze at. It is, honestly, the secret to my success against “superior” armor. I’ve vaporized anything that’s not a big cat unit on shooting in one round, and the 14 inches gets you around the side of anything else that you can’t destroy from the front. It’s how I beat IS-2s, Panthers, and Tigers. It’s a very simple, straightforward principle that works. You grab the enemy by the belt and don’t let go.

Now, one note to go with this. You WILL lose tanks. You have to make peace with that. If you try and coddle your tanks, you not only cede the initiative to your opponent, you are going to lose them anyways to long range fire. So, to once again paraphrase Patton, drive through your opponent like “poop through a goose!”

Find the weak spot, then hit it. HARD. The principle of Mass is another cornerstone principle in offensive operations. The idea is simple: concentrate your forces at the point where it will do the most damage. In game terms, if there are two objectives on the table, you should only be going after one. There is no reason to dilute your forces trying to go for two. Also, odds are your opponent will be spread thin trying to cover both defensively. So, simply put, find the weakest held objective (while analyzing terrain) and mass your forces against it. The Germans had a term for it “Schwerpunkt”. In the US Army we call it the “Main Effort”. I know this seems obvious, but quite often players dilute their forces going for two or attack the stronger objective rather than weaker.

In closing, I will give a recent example utilizing all three principles above. A game I played 3 weeks ago against a good friend of mine. At 2000 pts, he used Armies of Late War Panzerkompanie while I ran French 2nd Armored Division (a US List in all but minor details). The mission was Free for All, and I was the attacker. After looking at the table, I noticed that my opponent had a weak left flank held only by a three-tank platoon of Panzer IVs and a 37mm Flak Battery, with a wood for cover from his center. His right flank was held by a Jagdtiger and Panthers nearby, and a bunch of open ground. So, I naturally concentrated on his left flank with three units.

This demonstrates the principles of IPB and Massing of Combat Power.
Turn 1, Blitz, Tactical, and slung 10 Shots at his tanks (2 being 76mm). The Panzer IVs disappeared.
Turn 2 blitz, tactical, and once again sling shots. Whittled down the flak to one stand.
Turn 3 on the objective, assault and take objective. This factored in Violence of Action/Maneuver & Fire. Panthers did try to intervene, but was too late and had to cross in front of M10s providing overwatch for the Shermans. Game was over Bottom of Turn 3.

So, apply some real world tactical thinking, and you may just see your win count rise!