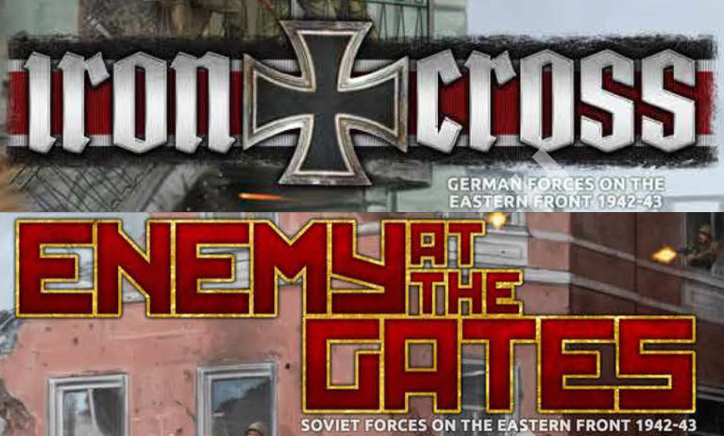 Today I’m going to take a quick look at the city fighting rules in the back of Enemy at the Gates and Iron Cross (just to note the rules are the same in both books). These are designed to bring the bitter struggle for the Battle of Stalingrad and other city battles in WW2 (Arnhem or Berlin anyone?) to the table top.

To go with this will be some plastic modular city terrain and that’s what the rules are designed to use. I’m always a little worried about city fight rules in games, they tend to be either overly complex for no reason, lack the flavour of the source material or just slow the game down for no real gain. I’m happy to say I feel these rules strike a nice balance between being very playable while staying try to the theme.

The rules themselves are ten pages long; the first two pages cover the use of the terrain in standard games of FOW, representing fighting around the outskirts. Not much to say as it mostly follows the rules in the rulebook, but it’s a nice addition for anyone worried about the lack of use from the buildings. There is a quick clarification on how the buildings do work with the rulebook rules, without the need for special rules.

Next up we have the inner city fighting rules. The first rule section covers table size and that it’s recommended you play on a 4ft by 4ft (or 120cm by 120cm if you like metric measurements). After this, you get the standard BF stuff two-page spread with a paragraph of what each type of terrain does. Some of the ones to note are streets slow movement down to Tactical or Terrain Dash as they covered in rubble, slowing everything down, rubble that works a bit like Crop Fields except it also provide bulletproof cover if a team is fully inside of it and boulevards that add some options for tree lines or tramlines to add linear terrain. The remaining six pages cover how the buildings themselves work in game terms. The first thing to note is that although the buildings have holes in the sides of them they represent full buildings with 4 walls, the gaps are just there was you can move the models around easier. Each of these buildings is divided up into rooms between 4 and 6 inches across and are delineated by interior walls. Also it should be noted that all the area on floors above each room counts as the same room, the extra floors mean you can get more models into the same area and to this end, all movement upwards it free, so you can move a team straight to the top of the building if you wish. Once inside the building, all movement is measured from the room itself, not the team. This means you don’t need to worry about measuring through walls or balancing models on awkward rubble sections. Just move the team so it’ll fit in the room. But this works both ways and once inside of a building, enemy teams also measure to the room and not the team. Likewise, a bombardment just targets a room and you roll to hit all teams within that room and brutal weapons get a bonus when firing at a building. Assaults are done on a room vs room basis with all teams in the connecting rooms counting as being in base to base with each other.

Finally, there are four new missions to play with the new rules, two in Enemy at the Gates and two in Cross of Iron giving you four missions in total. All the missions are played on a 3-foot by 2-foot table (60cm by 90cm) and are meant to be played with 30 to 50 points per side. You also only need 2 of the large buildings to play them and the set up of these changes mission by mission. In most of the missions, the defender only gets 40% of their force on the table and both players can set up their artillery off the board using the Across The Volga rule. In all-but-one of the missions taking one of the two buildings is the objective turning them into the focal point of the games (as it should be). Well that’s a quick look at the city fighting rules, personally, I’m very excited for them and have decided to paint up a Hero Rifle Company for use in the city fight missions. Adam and I will be playing a series of games for the blog playing through the missions, so keep an eye out for that.