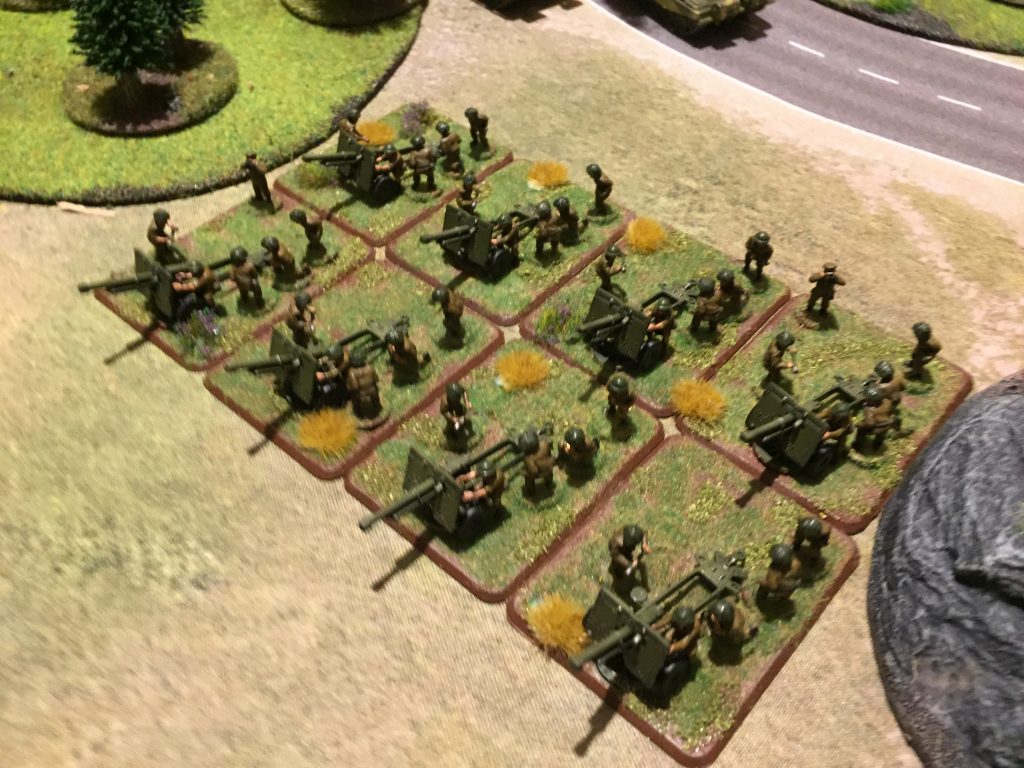 Today Mark gets back in the writing seat after a stint away.  Getting ready for ETC 2017 he picked up 2 x boxes of Plastic Soldier Company 25 Pdrs for review.

Lets face it, wargaming can be quite an expensive hobby.  Have a look in your ‘man cave’, display case or carry cases and just think how much you have spent on models over the years (let along all the accessories and modelling equipment).  Despite this we keep buying more; however savvy gamers are always on the look out for cheaper, quality, products to help allow us to stretch our gaming cash a little further. Plastic Soldier Company has filled this need in recent years although BFs growing plastic range is really giving them a run for their money.

Following a successful Kickstarter Plastic Soldier Company have completed a bold new move, by starting to create multi variant plastic artillery batteries something that most of would agree is one of the more expensive investments in FOW.

This new box-set allows you to build 4 variants of 25pdrs, transports, limbers and with a bit of thinking it even gives you enough extras for an additional 4 guns (see below).  It certainly seems interesting so lets take a look. The 25pdr box set contains 4 x gun sprues and 4 x transport sprues.  Officially the box will make 4 guns, made up of 4 variants, the 18/25pdr Early War (EW) version, Mk 1-2 EW/Mid War (MW) version, Mk4 muzzled Late War (LW) version and the Peasant 17/25pdr Anti-tank gun version for Mid-war.  Additionally the sprue has 2 sets of crew,  1 for LW and 1 for EW as well as limbers for the guns.  Each transport sprue will make 1 x  quad tractor (the box comes in two variants, Morris Quad or a CMP quad, depending on needs) to pull the guns. Now the eagle eyed amongst you will look at the image above and realise you can make 2 guns off each sprue (an EW/MW and a LW) and that you have enough crew for it as well.  Basically you can make 1 gun with the red variant and 1 with the blue variant.  In my case I made 4 x Mk4 and 4 x MK 1-2.  To do this you have to not make the limbers as you must sacrifice their wheels in the process – thanks part standardisation! The box will set you back £21.50 which is considerably cheaper than the BF Royal Artillery battery which will set you back about double that at £43.50.  The BF battery contains scenic bases as well the command stands and their carrier transports – but no quads.

It should be noted at this point that,  for our purposes as Flames of War players there are no large bases, no observers, no HQ or Staff Team and no transports for them.  Ultimately the cost of acquiring them needs to be factored into the equation

With the PSC version you can of course buy the BF Arty HQ blister or order some command figures via skytrex/Peter Pig, a pain for sure.  At £14.50 for a full HQ from BF you are now only roughly £10.00 cheaper than the full BF box set, with bases still needed.  However you also have to bear in mind that you can make 8 guns out of 1 £21.50 box so it’s a pretty difficult comparison and everyone will have a slightly different view.

As you can see in the image above assembly of the models is quite easy and I quickly managed to get the guns assembled.  The tractors were a bit harder and I found I had to be very exact to get the roof to align and not leave a gap, but I got there in the end.

Unfortunately there is a flaw in the casting. If you look at step 7 of the instructions image above you will see 2 parts that the wheels attach to.  Unfortunately in the EW/LW version (red parts) the axle has been made far to wide so that when you attach the wheels they  are far wider than the turntable and gun shield.  Its hard to describe but imagine the wheels sticking out a long way from the side of the gun.  Its easily solved by some clippers but its quite an odd flaw.  Its almost like the size of the axle was for the 1/72 version?

Apart from that the detail is nice, not as pronounced as the BF version or as refined as some of their new plastics but still good and it paints up well.

The crew casts fit in well with the rest of the PSC British range and follow their style of not being heroic scale like BF (i.e. they don’t increase the scale of the webbing, face and limbs).  This can make them appear skinnier than the more familiar BF stuff.  Here is a comparison side by side.  While as a 8 gun gun battery together I think they fit into a wider army well, I wouldn’t mix the gun troops because of the obvious size difference caused by the heroic scale. I have somewhat mixed feelings about these models.  On the one hand they are great value, especially as you can make 8 guns for £21.50.  That’s incredibly cheap and more than welcome when the BF boxed set is so expensive and somewhat hard to come by at times.

On the other hand I think PSC has missed a trick by leaving out the command, staff and spotter teams.  This inevitably results in you having to source them elsewhere, probably via BF or a third party like Skytrex.  On top of that you need 4 (or even 8) large bases, something which you rarely have spare.  The absence of these models is a real shame and a missed opportunity in my humble opinion.

All in all this is a very well priced, attractive and versatile alternative to other brands but be prepared to dig out some spare command models or purchase some more and be sure to factor this into your value/cost analysis.  At the end of the day choice is great and I am certainly pleased with my purchase and the models quality. Ready to bring a Mike Target down on someone