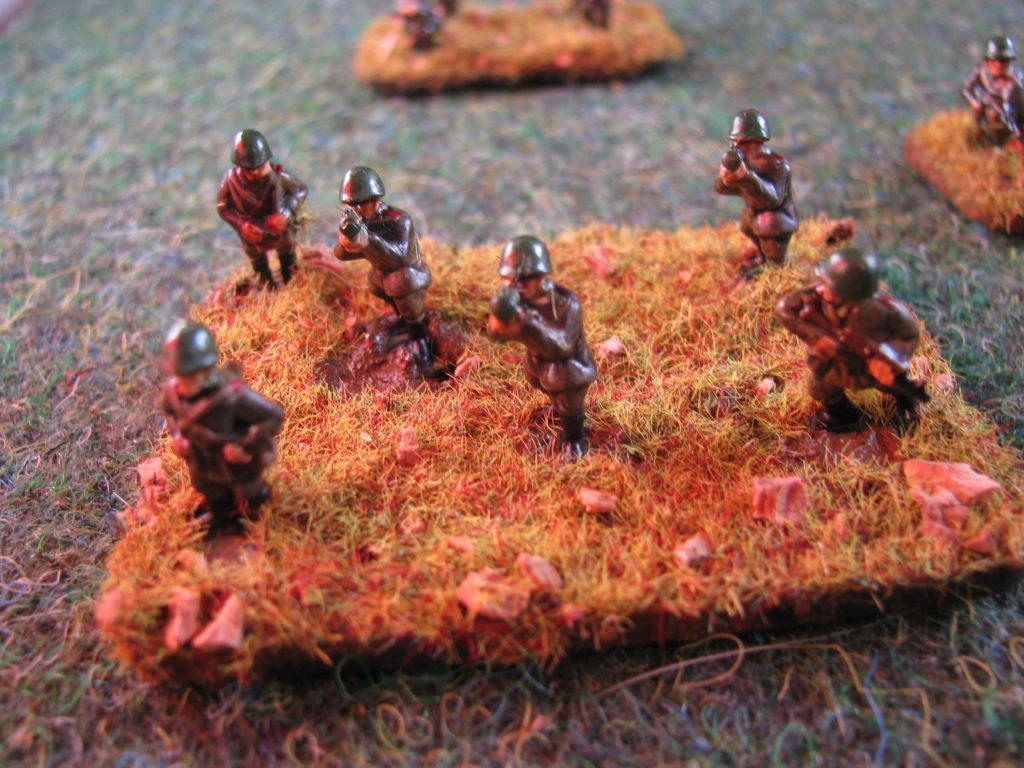 Will from Plastic Soldier Company was kind enough to send us a box of their new (well new when sent, I’ve been a bit busy) 15mm Cold War Soviet Infantry to review

As the resident Cold War Soviet on the BA staff they ended up with me to review. Now I have to own up and say I’m not a huge fan of plastic figures, despite having grown up with 1/76th Airfix models in the days when the rules you used were copied out of Don Featherstone books you borrowed from the library !

I’ve kind of got used to metal as the order of the day for my serried ranks of ancient, renaissance, Seven Years War, WW2 and now Modern 15mm armies, so were PSC going to break the mould (sorry couldn’t resist) and tempt me back into plastics

The box contains 141 hard plastic figures on several sprues. The figures are easily removed from the sprues and there is a nice variety of poses which you can see from the illustrations, in Team Yankee terms there are a couple of figures that have less usefulness than others as there are 3 figures with the Dragunov sniper rifle, and 3 with the periscope sights for the AT3 (Sagger) launchers included. However with the remainder of the figures you can create

16 AK Stands (4 Figures medium base, some with LMG armed figures)

1 AT4 Spigot Team ( 3 launchers and crew, 3 riflemen large base)

1 SA14 Stand (3 figures with launcher and 3 Riflemen, large base)

So that’s not a bad return 1 full sized company, 1 medium sized company plus support weapons, except as you have probably spotted a dearth of RPG stands caused by the box only containing 10 RPG armed figures. (solution to follow)

The Figures are nicely detailed with a mix of full packs or haversacks and webbing. I found them a little more difficult to paint than ArmiesArmy figures (now acquired by PSC) which are slightly chunkier and have more raised detail (and slightly bigger sculpts for the weapons), however I am pleased with the painted outcome which passes my standard “two foot from the table” test. I certainly don’t claim to be anything other than a very basic level figure painter.

Once painted and based the figures match quite nicely with the aforementioned ArmiesArmy sculpts (which are of course in winter kit) which we’ve reviewed previously. The PSC figures appear slightly larger than my metal Battlefront Soviets, but not so much that it’s jarring

Retailing at between £19 and £21.50 depensing on where you buy them, the pack gives you a pretty good out of the box Soviet Motor Rifle force to deploy with whatever motor transport suits. Except of course that lack of RPGs, well there is a very quick and easy solution, facilitated by the extra figures you have left after creating the bases above. One pack of Peter Pigs “professional RPG” figures from their Modern Africa range gives you 8 additional RPG figures, and by utilising the spare PSC figures you’ll have the 16 necessary for 1 Large and 1 Medium Motor Rifle Company (Peter Pig also do helmeted LMG gunners in the same range if you want to run a BMP based company)

Did it convert me back to plastics, well I have to say I’m such a fan of the Armies Army range that I would always plump for them, but the PSC figures are certainly fine models and well priced so they get a well deserved thumbs up (though a few extra RPG men wouldn’t go amiss)