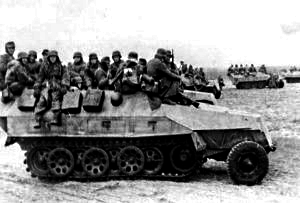 – Mein Gott! Hans what teams do we have in here? Is that a panzerfaust?

Today, Duncan looks at his new Gepanzerte Panzergrenadier transport trays from Dark Art Miniatures and break out his brushes to give them a sharp new paint job at West (Sussex) Coast Customs!

So having been working on some EW Australian Divisional Cavalry for DAK DAK III I’ve been distracted from my beloved LW Germans for Normandy. The pile of unpainted resin, metal and plastic is getting smaller, but cranking out a whole 1500pts EW army inside three months took it out of me and getting back into the camo swing of things was proving… problematic.

There are some awesome Flames of War Facebook Groups out there and the one for the German Forces Flames of War is an amazing group of really knowledgeable people, and usually quite active; and Klaus from Dark Art Miniatures is also a member of that group… Long story short Klaus shared this: And I went – “OOOOOOOOOH!” I am forever misplacing which unit are in which transport – I don’t think that it is as bad as the US Armoured Rifles but still – this seemed an elegant solution and would give me something different to sink my painting teeth into (also I can be “that guy” at my local club then too).

Right let’s look at the options currently from Dark Art Miniatures. They have German Sd. Kfz. 250 and 251 halftracks, US M3 halftracks and for Vietnam Huey Slicks and Soviet T34 tank riders and captured Sd. Kfz. 250 and 251 tracks so there is a nice spread. All Passenger Trays come with some form of numbering or if you are like me and have already applied decals to your vehicles there is also an option to get your choice of numbering applied. For me this is a really nice touch, especially when you have the smorgasbord of different numbering schemes that the German forces used at different periods of the war.

Also for the Germans you have the choice of unit symbols from: Generic Heer, Generic SS, Das Reich, Grossdeutschland, Hitlerjugend, LSSAH, Panzer Lehr and Wiking. So a good cross section of options and the 2 generic trays if your particular unit is not listed. I’d love to have seen a 21st Panzer for Normandy with the lovely U304(f) but that not being an option currently.

I went for the other Gepanzerte Panzergrenadier formation I have and plumped for the 12th SS Hitlerjugend Division.

Each set is made of 5mm MDF and contains the parts, in the case of the Sd. Kfz. 251 set, for one Axis Sd. Kfz. 251 Half track Passenger Tray and 4 numbered tokens for your transports. Each tray is designed to represent a platoon of 4 transports and have space to accommodate the associated platoon of German infantry. As I’ve got a company of Gepanzerte Panzergrenadiers I went for 3 packs – enough to house the 2 combat platoons I’ve got and the company commander, 2iC and Panzerschreck  team.

The first obvious point to note is that the trays come as two separate piece that you need to stick together to form the tray. I decided that I would glue them together before I painted them up – in hindsight I’m not 100% sure that this is the path that I’d take if I had to do this again. I liked Klaus’ paint job on his trays but wanted mine to reflect the painting of my 251 halftracks; there is an exception to this which I will get to later. I used bog standard PVA to stick the front of the tray to the back and popped some heavy-ish books on top of each to make sure that the moisture in the glue didn’t accidently warp the MDF. I’m not sure if wood glue is a better bet here or not as the PVA seems to have done the job quite nicely. I left the trays underneath the weighty Next catalogues overnight just to make sure that everything was good and dry before I got it all sloppy and wet again. As MDF might as well be a sponge when it comes to paint I decided to try and seal the wood before applying the base coat – be warned! If you miss this step the MDF will drink your spray paint and you will almost certainly finish up with an uneven base coat.

The instructions on the Dark Art website are to use a primer and normally I’d reach for my trust can of Halfords Grey Primer but this time the can and the cupboard were bare… so instead I decided to give the whole tray a couple of coats of thinned down PVA glue. The only thing to be careful of is that the excessive damp of the watery PVA can cause the MDF to warp so make sure that you weight or clamp down the edges so that the trays stay flat and true.

Once those time intensive jobs are done it’s down to the painting and more time watching stuff dry. I undercoated my trays with my Dunklegelb colour of choice – Games Workshops Zandri Dust spray. There are a few reasons why I use Zandri Dust for my German vehicles but the main one is availability. I’m lucky (or unlucky) that we have a local GW still where I live so supply is not an issue – I also don’t have to spend a small fortune on postage with the draconian rules from the Royal Mail prohibiting aerosol spray paints from being able to go through the standard channels. *insert expletive*

The other main plus is there is obviously a pot of paint that matches exactly and that is a big help getting the worn, feathered look on the coloured camo colour edges.

Once that has dried nice and evenly, you have the solid foundations to crack on and add some colour, and in this case camo, to the trays. These two paints may be my favourite Vallejo colours – Reflective Green and Hull Red. They cover beautifully and can be watered down or thinned with medium and really retain their pigments well. They are what I used for my LW Germans so to marry them up with the trays I stuck to the same colours.

Now normally I apply my camo patterns with a cotton bud – that is a tale for another day – but given the surface area I thought I’d better upscale my tools too so I “borrowed” a cheap painting brush from the kids art supplies. This kind of hard, acrylic bristled brush is perfect for the job of stippling on the paint to begin to form a sprayed on style on the trays. I used quite a dry brush when painting on the camo patterns – not quite as dry as actual dry-brushing, but I would dab of any paint excess on some kitchen towel before quickly stippling the paint on to the tray. The next step was slightly tricky – I had to define the lettering so that it stood out from the similarly coloured trays. I umm’d and ahh’d about this for a while and in the end decided to use what I would on a model – a wash. I grabbed my bottle of Agrax Earthshade and carefully painted around the lettering and halftracks just to define the edges of them and, once they were dry, I then went back and carefully dry-brushed Zandri Dust over the same areas to tidy up any bits that looked too dark. The next stage was the fiddliest by miles! The white edges of the 12th SS symbols and the white on the SS badge in the top left of the tray. There is no shortcut here it’s a painstakingly slow process with a fine brush and a steady hand but the neater you can be the better here. I made some little errors that I went back and corrected with either the Zandri Dust base or the Reflective Green or Hull Red but even those corrections can be troublesome as the white is very fine and because of this, when I did get some Hull Red on the edge of the shield, it took even longer to go over the white again to kill the colour as it did in the first place. For your own sanity I’d do a tray at a time and then have a break in between. The penultimate stage is to block in the black of the shield and the SS runes and, again, this is case of patience – it’s not as bad as the white as you can do the tricky bit up to the white edges, but then blocking in the majority of the area is easy after that. I then chose to paint the halftrack numbers – I was going to do them the same colour as the numbering on my 251’s but I’d done those black and I really thought that the trays could use a little more colour; so I rebelled and painted the numbers a nice rich, red.

I like the red; I think having more black may have made it a little one dimensional, so I’m pleased that I opted for something a little different.

Below you can see the final trays with my 12th SS Panzergrenadiers and 251’s and I think it looks cracking. Once undercoated the trays took the paint really well – the surface stayed smooth and was really a joy to apply the paint to. If anything the detail is too good on the shields with the laser cut lines being so small that painting them can be a little fiddly to do but the end result because of that detail is absolutely superb.

From a practical perspective there is tonnes of room on the tray for anything that you can cram in there and whilst the detail is fine the trays themselves are very robust and have a nice solid feel. I managed to hold 3 full trays with one hand so moving them around the playing area is easy and feels safe too. Also there is no reason to go the whole hog and paint your trays unless you want to – they look good and are just as practical simply assembled. Come on who am I kidding we will all want to paint them – we’re nerdy gamers!

In terms of what could be done to improve the trays – well there is not much really they are well designed and engineered, as I said above. What might be nice as a tweak in the future is to have the section where the halftrack is cut out so that the 251 or other transport could also fit in the tray when carrying around the tray from table to table or case to table, but this is just a potential enhancement rather than something that needs to be addressed. 8/10 Kill Rings – if more options become available then that would rise to a giddying 9/10.